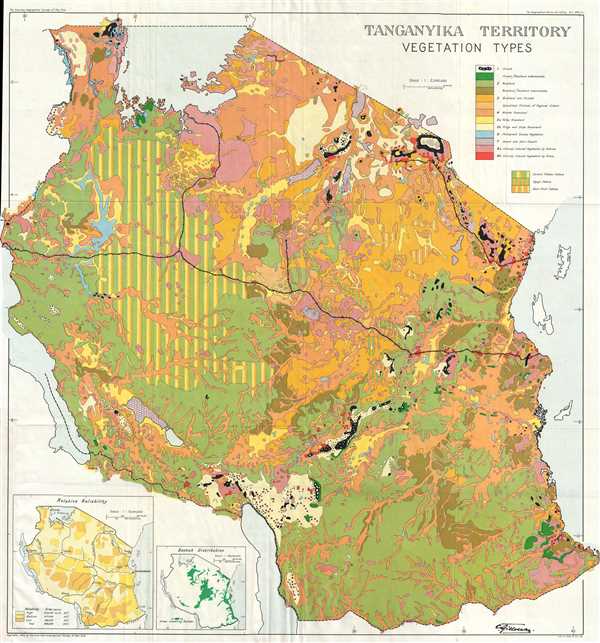 The life's work of the incredible geographer Clement Gillman - who spent most of his life in East Africa.
$350.00

This is a 1949 Clement Gillman map of vegetation in Tanganyika (Tanzania) The map depicts the Tanganyika Territory, modern-day Tanzania, within its contemporary borders from Lake Victoria and Kenya to Zambia, Lake Malawi, Malawi, and Mozambique and from the Rwanda, Burundi, and Lake Tanganyika to the Zanzibar Archipelago and the Indian Ocean. Using various different colors and patterns, thirteen different types of vegetation are illustrated throughout the territory. These include forest, woodland, bushland and thicket, wooded grassland, valley grassland, ridge and slope grassland, permanent swamp vegetation, desert and semi-desert, and vegetation actively induced by natives or aliens.

Three different 'catenas' are illustrated on the map was well. These are the Central Plateau Catena, the Ugogo Catena, and the Rain-Pond Catena. Per Gillman, who defined a catena in his paper, 'A Vegetation-Types Map of Tanganyika Territory' published in Geographical Review in January 1949,

a catenia is a distributional sequence of vegetation types determined by a given set of regularly repeated physiographic and/or hydrographic conditions (with their effect on soils), the arrangement of vegetation types being a function of local differences in topography that are constantly repeated over the catenary area. It will be seen that a 'catena' is therefore not a category of classification as main types or subtypes are, for between one zone of the catenary complex and the nextt there is usually some principal classification line' it is merely a device to permit a more correct representation of the vegetational facts on a small-scale map than the usual misrepresentation that results from showing only a single dominant type,

. In other words, the catenas are areas that are more complex in their plant make up than can be adequately represented by one color on this map, according to Gillman. By using the category of 'catena'. Gillman is able to illustrate a more complex area of vegetation more easily on such a small scale map.

Two inset maps are included along the bottom border in the left corner. The larger of the two, entitled 'Relative Reliability', depicts the reliability of the data presented on the map. 'High reliability' areas, Gillman states in his paper, 'claim only reconnaissance status' and cober about 55% of the map. For regions that are poorly known vegetationally but are surrouned by better-known areas and possessing identical topographic features, 'topographical interpolation was thought permissible'. These areas are classed as 'medium reliability' and make up about 25 percent of the map. The rest of the map, 20%, can claim only 'low reliability'. The smaller inset map depicts the distribution of the legendary baobab tree in Tanganyika.

This map was Gillman's magnum opus, for which he began gathering information in 1913. It was finished in 1946 and received by the American Geographical Society a month after Gillman's death in October 1946. A first manuscript draft of the map was completed in 1944-45, on a scale of 1 : 500000 in 25 sheets or parts of sheets. For practical purposes, however, the scale had to be reduced to 1 : 2000000.

This map was produced by Clement Gillman and was accompanied by a paper. Both were published in the Geographical Review by the American Geographical Society in January 1949.

Clement Gillman (November 26, 1882 - 1946) was a geographer, cartographer, engineer, hydrographer, and intellectual of Anglo-Swiss and German ancestry. During his entire working life, Gillman shuttled between East Africa and Europe, working for the railroads as an engineer, and gathering scientific knowledge, which he condensed into several papers which were published in scholarly journals.

Gillman was born in Madrid to his father, Fritz Gillman, who was managing his father’s silver mines in Spain, and his mother, Margarete von Petzholdt, a German national who grew up in Estonia. In 1900, at the age of seventeen, Gillman entered a five year engineering course in Zurich at the Technical High School. Upon completing his studies, Gillman was offered an appointment as Assistant Engineer with Phillip Holzman and Company of Frankfurt-am-Main. The firm also happened to be the contractors for the construction of the first section of the Central Railway in German East Africa. Following a short stint working at the company headquarters in Frankfurt, Gillman set off for East Africa and arrived in Dar es Salaam on October 21, 1905.

Gillman instantly took to life in East Africa, stating that he felt an ‘increasing love for life away from ‘civilization.’’ He became the engineer in charge of several successive sections the central railway as it pushed across German East Africa. After twenty-three months in Africa, Gillman received his first leave and returned to Europe, where he stayed until June 1908. While in Europe he married Eva Kerber on February 22, 1908. They returned to Africa together and arrived in July 1908. Gillman continued his work as engineer in charge of the construction of the railroad until his next European leave in August 1912. Once back in Africa, Gillman was put in charge of the preliminary survey for the proposed Kagera railway to Rwanda. This was only a short deployment, after which Gillman returned to Europe, until definitive plans were made for a survey in May 1914, when he returned to Africa with his wife and two sons. But, with the outbreak of the First World War, the Kagera railway was abandoned.

The Gillman family spent WWI in East Africa, and Clement spent almost two years as a civilian prisoner of war. By September 1916, the Belgians had occupied Tabora, where the Gillman family was living. Gillman left his family in Tabora and went to Dar es Salaam, where he was commissions as a 2nd Lieutenant in the British East Africa Protectorate Force and attached to the Railway Corps. Due to his Anglo-German descent, Gillman was not immune to exceedingly difficult treatment during the war year, writing in 1917 of, ‘renewed attacks by my enemies, and much suffering due to suspicion and intrigue.’ In March 1919, Gillman received two months military leave in England and began searching for what to do now that the war was over. After a venture in Brazil with his uncle never materialized, Gillman decided to ‘sell his soul’ to the Colonial Office.

Gillman was back in Africa by December 1919, and was made District Engineer in charge of the Tanga District. By May 1920, he had a permanent post in the Colonial Office and in 1921 was named District Engineer Tanganyika Railways. From July 1925 to February 1926, Gillman conducted reconnaissance for a proposed rail route to Lake Nyassa, which he bluntly stated, was an impossible proposition involving a criminal waste of money. In 1928 Gillman was appointed to the post of Chief Engineer, Tanganyika Railways.

His scholarly work truly began in 1930, Gillman’s eighth journey to East Africa. From this time on, he would produce a steady stream of papers, letter, notes, and reviews on a great variety of subjects. His time was spent almost constantly traveling, conducting surveys and inspection work. His passion for hydrography led to two memoranda on floods in East Africa, while his love for mountaineering led him to compile a bibliography of Kilimanjaro, which he scaled on several occasions. In 1933 he published a report on the hydrology of Lake Tanganyika. His last tour of duty began in February 1937, which was filled with routine inspections, essentially a farewell tour. He retired at the end of the year from his post as Chief Engineer, until his final retirement in 1940.

Retirement meant anything but a lessening of activity for Gillman, even during the war years. For the last six years of his life, even with a generally failing standard of health, he made numerous tours of East Africa. The King George V Memorial Museum opened in December 1940, with Mrs. Gillman as its first curator. He published over thirty works during these years, including eleven which count as major papers. He produced a paper on ‘clouds and cloudscapes’ in 1940, which was the embryonic form of a cloud atlas which Gillman intended to produce after the war. He also published a history of the building of the Tanganyika Railway. The crowning achievement of his career, however, was published posthumously in 1949. This was a study and map of vegetation-types of Tanganyika. This was his magnum opus on which he spent over 1,000 hours during the last two years of his life. He completed a draft of the map on a scale of 1 : 500000 in January 1946, which the final version being sent to Geographical Review on September 20. He died a few weeks late, on October 5, while flying from Dar es Salaam to Moshi, engaged in making notes of the journey.