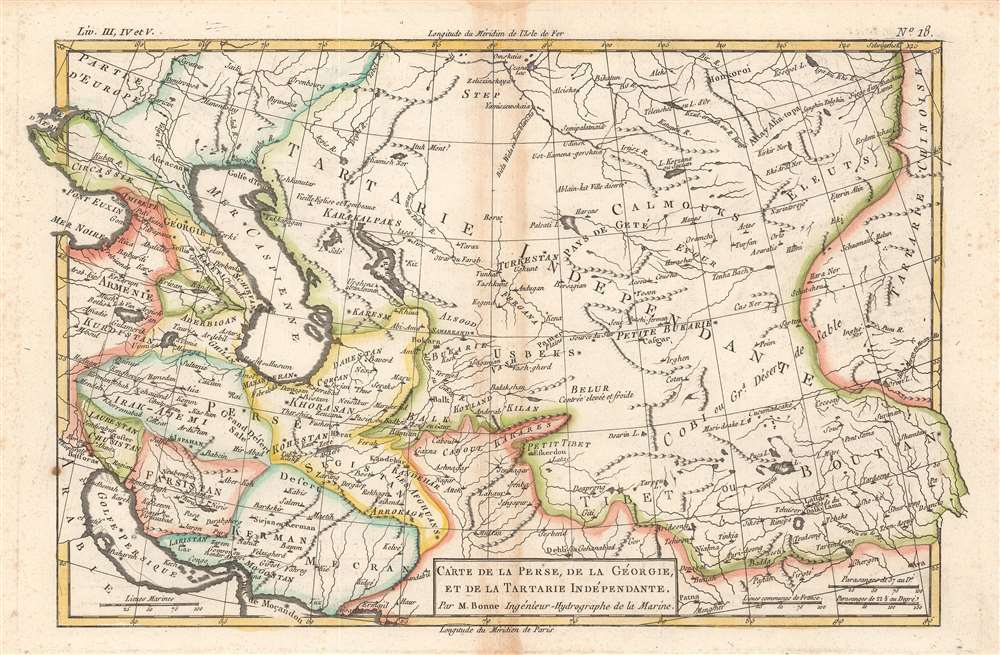 This map of Tartary, or Central Asia, from the Black Sea to Tibet was issued in 1780 by Rigobert Bonne. It covers much of the Middle East and Central Asia, including 'Independent Tartary,' which was gradually incorporated into the Russian Empire in the 19th century.

This map is small but detailed and beautifully crafted. Towns, religious structures, cities, and mountains are depicted in miniature representations. An impressive, if somewhat imprecise, level of detail greets the viewer. As is reflected here, the territories historically considered as Persia were disunified at this time. The long-reigning Safavid Dynasty was in decline and under attack from multiple directions, including at the hands of the Ottomans, Russians, and Afghans. In the mid-1730s, the brilliant military commander Nader Shah established a new Afsharid Dynasty, expelled the invading forces, and even staged a raid on Mughal Delhi that brought back tremendous riches to Persia. However, in his later years, Nader became cruel and megalomaniacal, inciting revolts and eventually his own assassination in 1747. Afterwards, Persia descended into a chaotic situation with further foreign invasions, until relative calm was restored by Karim Khan of the Zand Dynasty based at Shiraz (here as Shiras).

Good. Some discoloration along fold line and foxing in the margins.