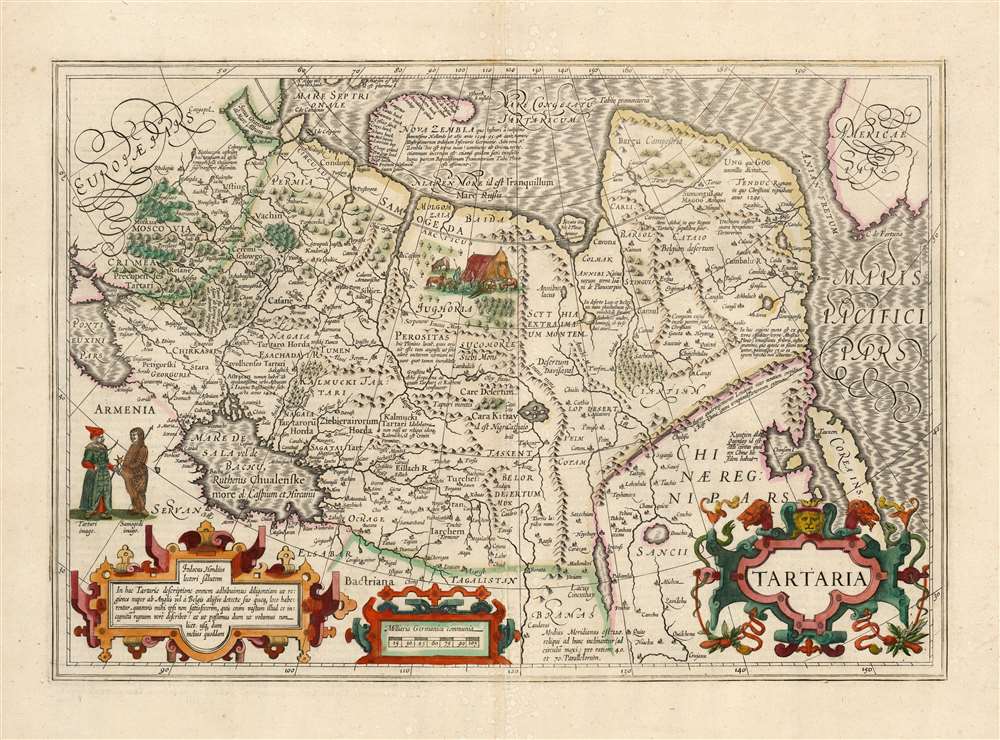 Central Asia at the Dawn of Tsarist Russia

This is a beautiful, original-color example of Jodocus Hondius' 1606 map of Tartary: Northern Asia, extending from Muscovy and the Black Sea in the west, to the Strait of Anian, China, Korea and the Pacific Ocean in the east. At the furthest extreme of the map is part of North America. The map reaches from the Arctic, as far south as 30 degrees above the equator, embracing the Caspian Sea.

The 16th century saw the birth of the Russian Empire - in part, at the expense of the Tatar Khans who had previously held Muscovy as a tributary. But by the time of his death in 1505, the Grand Prince of Moscow Ivan Vasilivich III had consolidated his domestica powers, while at the same time rejecting Tatar authority and expanding Muscovite territory from about 600 square kilometers to nearly 15,000. Vasilivich's grandson, Ivan IV (the Terrible) would become the first Tsar and would continue to subdue neighboring Muslim Khanates, and would begin efforts to absorb Siberia. In some ways more importantly, Ivan IV established diplomatic ties with England, creating the channel by which Russian geographic knowledge of Central Asia could pass to European cartographers. Although Russia, by the time this map was created in 1606, had been engulfed in the succession crisis known as the Time of Troubles, the Russia presented to European readers in maps such as this one would still be the Russia of Ivan the Terrible. The new knowledge of the Tatar Khanates all passed through the lens of Ivan's Russia.

The map is among those engraved by the elder Hondius to supplement the plates of Mercator's atlas, which Hondius had acquired and was continuing to publish; like all of Jodocus Hondius' folio maps, it is superbly engraved and richly embellished. And while the scope of the map is similar to the 1570 Ortelius Tartariae Sive Magni Chami Regni typus, the content of the present map has been updated to reflect the remarkable improvements in European geographical knowledge in the intervening thirty-six years.

A Revealing Map of an Obscure Region

It is easily forgotten that during the Age of Discovery, the depths of the Asian continent were as opaque to European scholars as Africa and the Americas, the seat of legend and religious myth, and that the first truly accurate maps of the region would not appear until the 18th century. Hondius, in his lectori salutem, explains (loosely translated here):

In this map of Tartary we have diligently applied in their proper places the descriptions of the English and the Dutch… Though in my eyes they themselves are not satisfactory, for they describe a vast kingdom unknown to any one. But we are not permitted as much as we want, until a better one (is found.)

As for the Dutch sources, the map relies on the northern coastal expeditions of Cornelis Ney and William Barents - although Ortelius can also be listed here. The English source referenced is, in all likelihood, Antony Jenkinson, an explorer on behalf of the Muscovy Company and the English Crown.

Hondius' main source for Muscovy, like that of Mercator and Ortelius before him, appears to be Antony Jenkinson's 1562 map of the Grand Duchy. Hondius' geography here is simplified for the sake of legibility and scale. He chooses to retain some interesting textual notations: For example, one Latin note reveals Biatloozora castle, to which for asylum in times of war the Muscovites transfer their treasure. This is likely referring to the Kirillo-Belozersky Monastery, which during the 16th century was the second richest landowner in Russia, and in whose cloister Ivan the Terrible had his own cell and planned to take monastic vows.

The White Sea, Barents Sea and the Kara Sea and the northern coasts of Russia have been corrected to reflect the exploration of those coasts by Barents, with the coast of Nova Zemlya traced to the point at which the last Barents expedition was famously forced to winter in 1596. In the gap thus created, Latin text draws attention to the Dutch discoveries of 1594, 95 and 96, and explains that although the east coast of Nova Zemlya has not been explored, it may in fact be part of the northernmost promontory of Asia posited by the First Century Roman scholar, Pliny the Elder. Pliny is again cited further to the east along the coast, where his supposed island of Tazata appears.

Other notes place relatively recent historical events beyond Muscovy's borders, and attempt to reconcile them with ancient geographical ideas. A reference to the destruction of the city of Astrakhan by Ivan Vasilivich (Ivan III) in 1494 (although the source may be confusing this with the re-conquest of the whole Khanate by his grandson in Ivan Vasilivich* (Ivan IV) in 1556). Other references to wonders ascribed to Central Asia by Pliny are presented with equal weight. A note (informed from Marco Polo) marks out the mountainous region north of China from which came asbestos - fibers of which, if thrown in a fire, would not burn. Another note shows the location of Tenduc, a kingdom where Christians were said to rule in 1290: Ortelius identified this same region as a Christian kingdom (not Prester John's, but known to him, having been founded by St. Thomas.

Some of the most striking differences between this map and the 1570 Ortelius occur in the regions of northern China and Korea, drawing on information which Ortelius himself brought to light in his later maps. The Great Wall of China, and the positions of the lakes in western China, are all drawn from Ortelius' 1584 map of China based on reports of the Portuguese Luiz Jorge de Barbuda. Korea - which appears for the first time on Ortelius' 1595 map of Japan - is included here in similar, insular form.

*Agreed, there are entirely too many Ivan Vasiliviches.

This map was engraved by Jodocus Hondius for inclusion in Mercator's atlas, which he had acquired and would continue to publish on his own. This example appeared in the French edition of the Hondius Atlas published by Henry Hondius in 1639. Separate examples of this map in its various editions are well catalogued in OCLC.

Hondius, H. Nouveau Theatre du Monde Amsterdam 1639     Mercator's Atlas is one of the most important works in the history of cartography. Although in fact Ortelius was the first to publish a proper atlas, the Teatrum Orbis Terrarum, Mercator's Atlas the first book to employ the term Atlas for a collection of maps. The term is derived both from the mythical titan, Atlas, who was forced to bear the world upon his shoulders, and the Libyan king, philosopher, and astronomer of the same name that, so the legend goes, constructed the first globe. Mercator dedicated the final 25 years of his life to compile the Atlas. He published two parts during his lifetime in 1585 and 1589, but the final part published posthumously by his son Rumold Mercator, in 1595. The map plates for the Atlas were later acquired by Jodocus Hondius who published the most complete and well known edition in 1606. It was Jodocus who popularized the Atlas and who did the most to elevate Gerard Mercator's work.