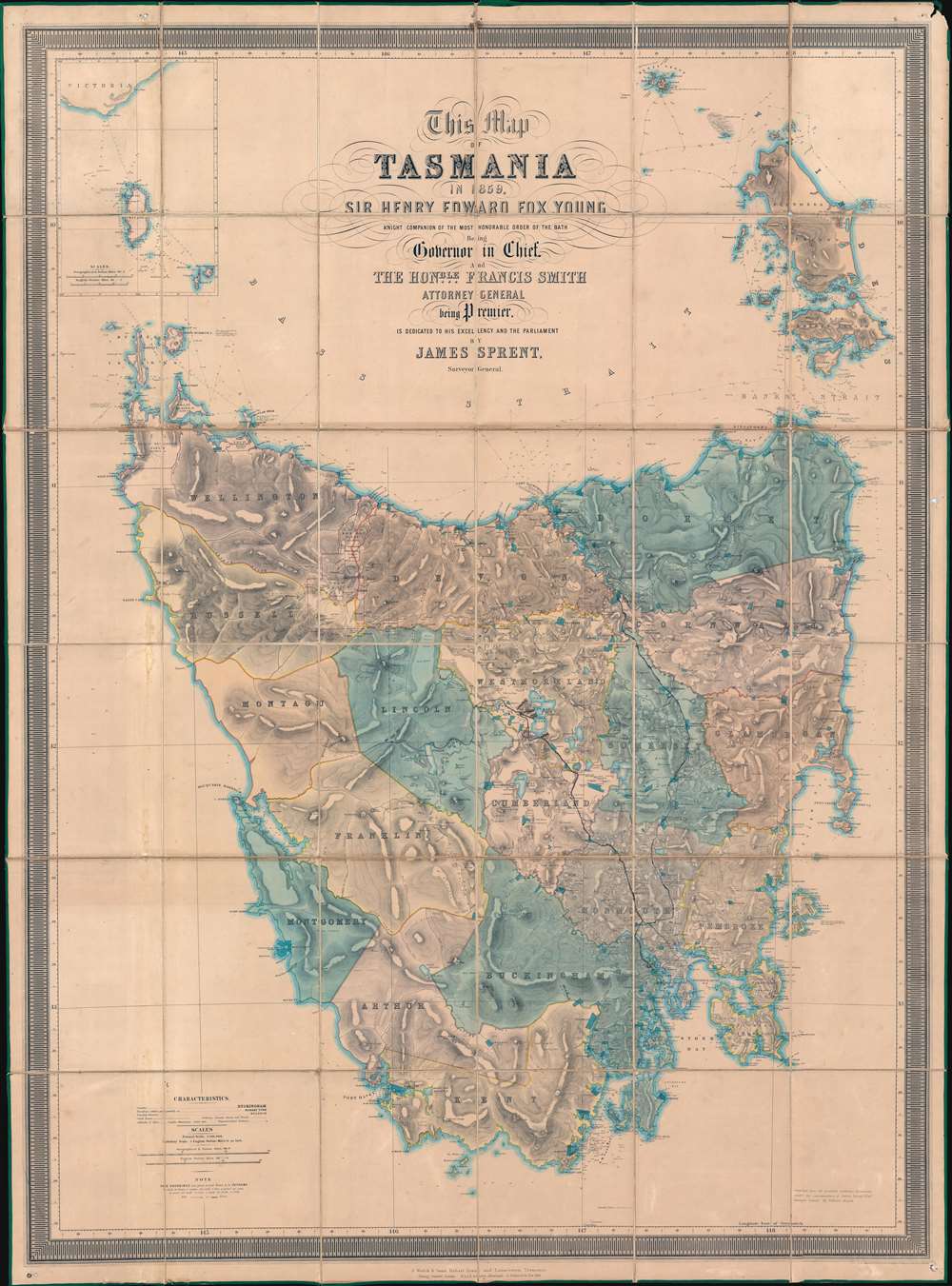 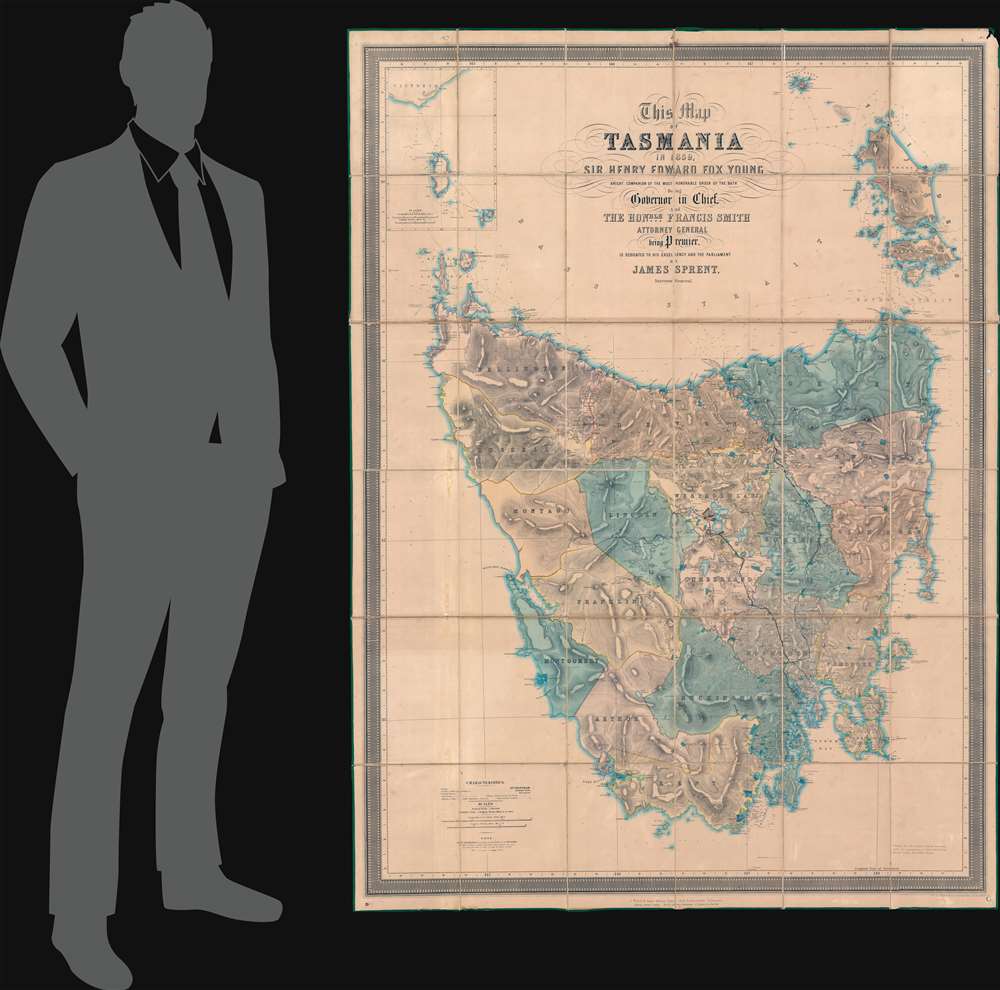 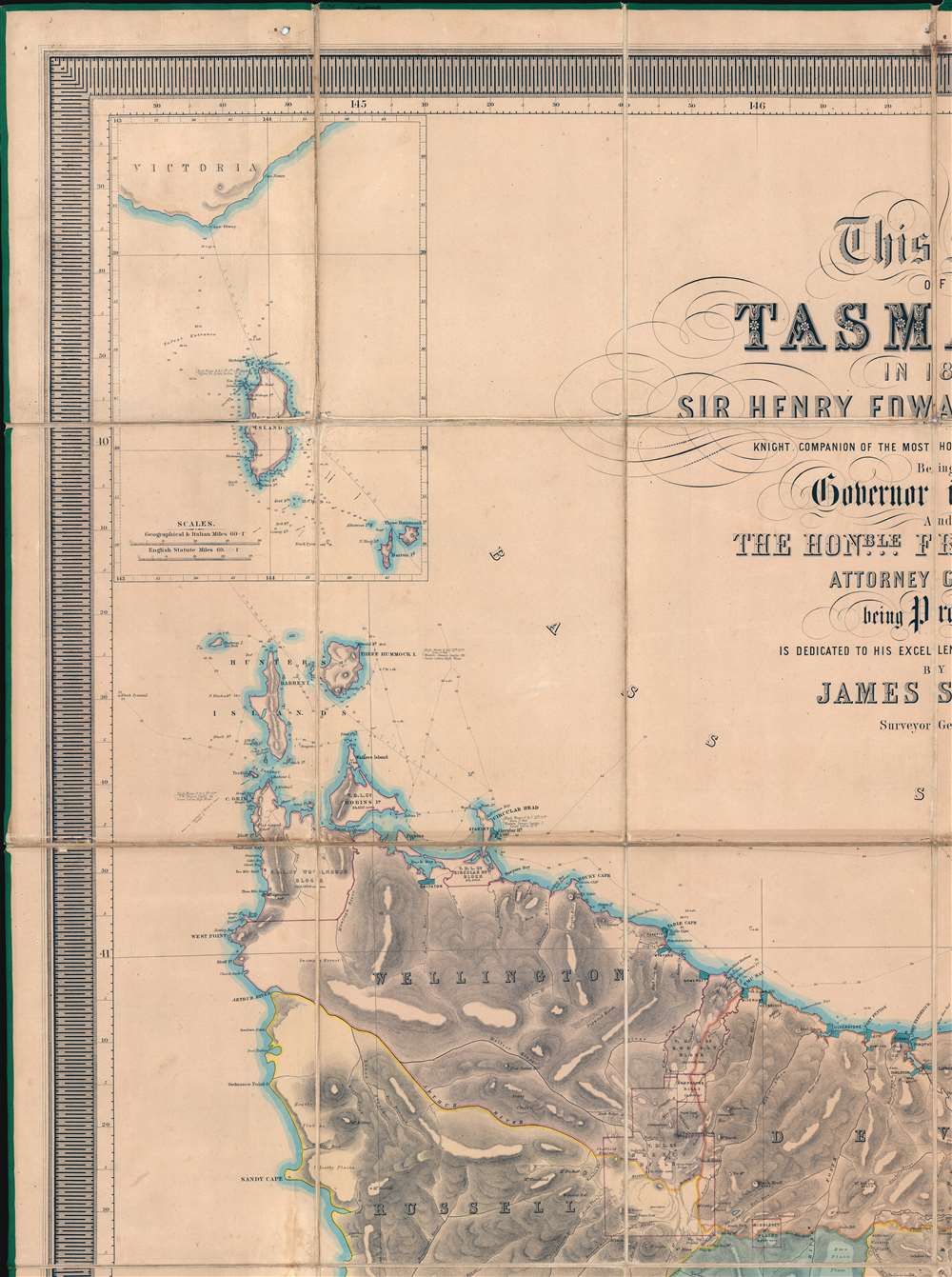 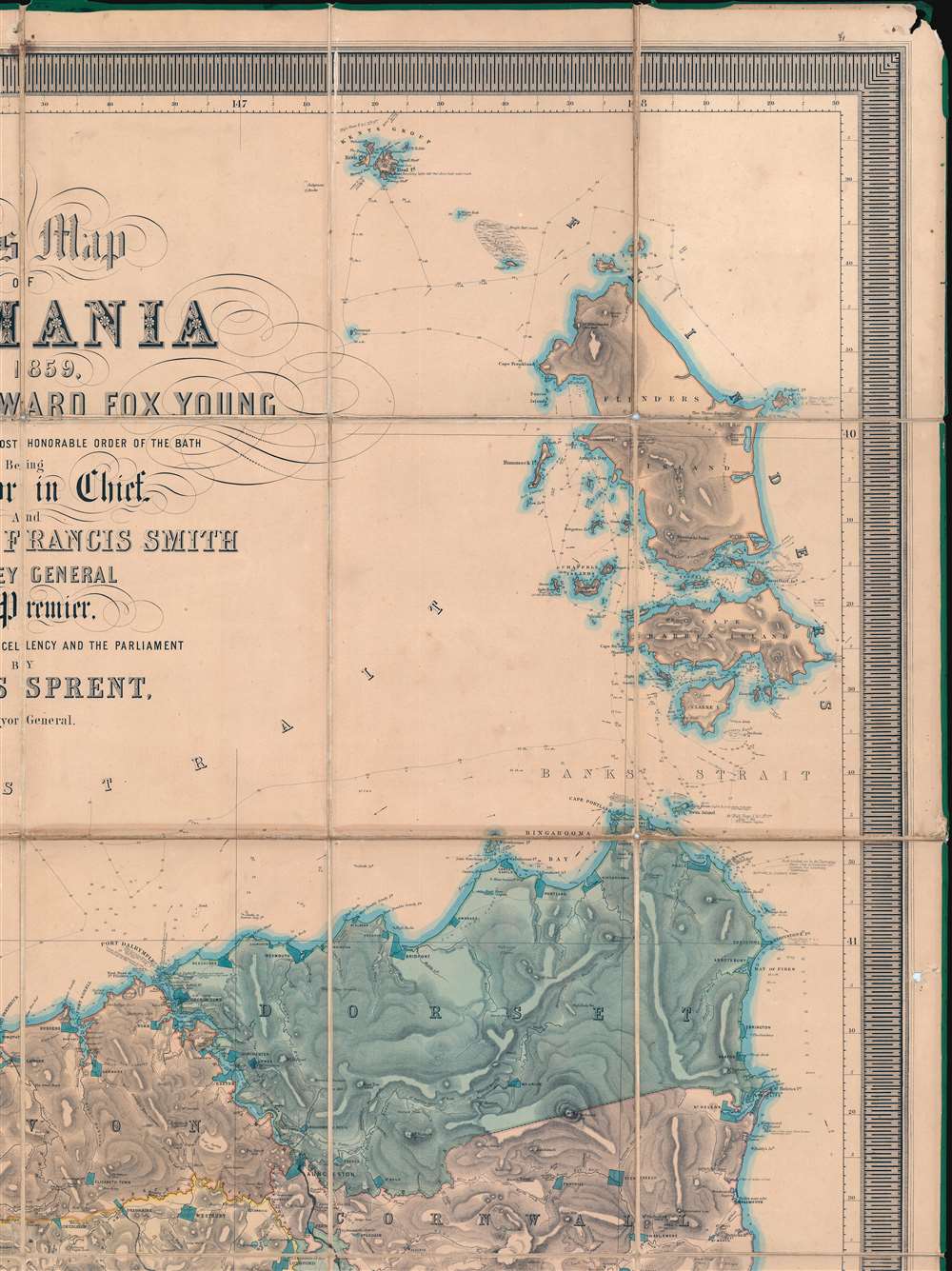 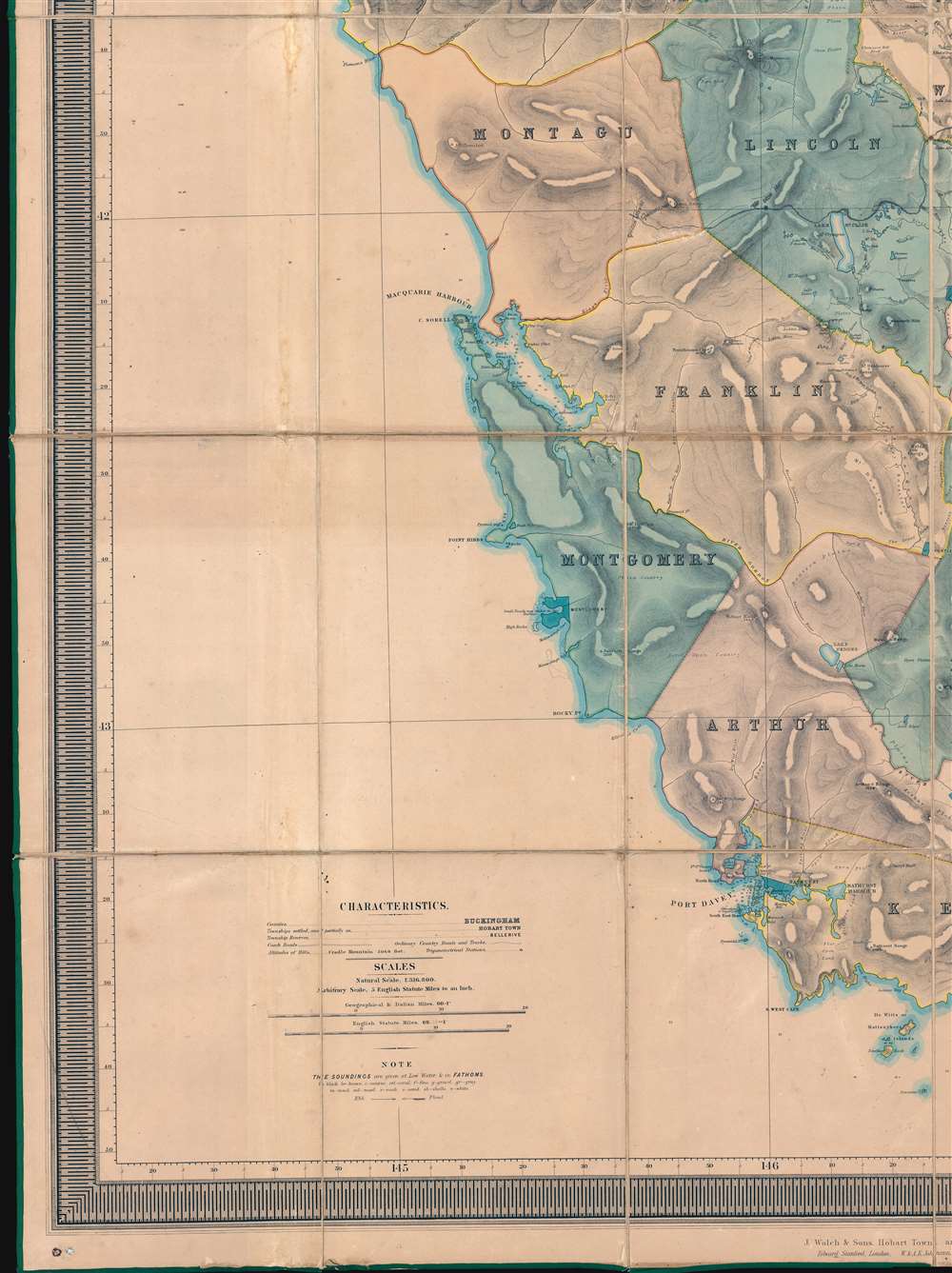 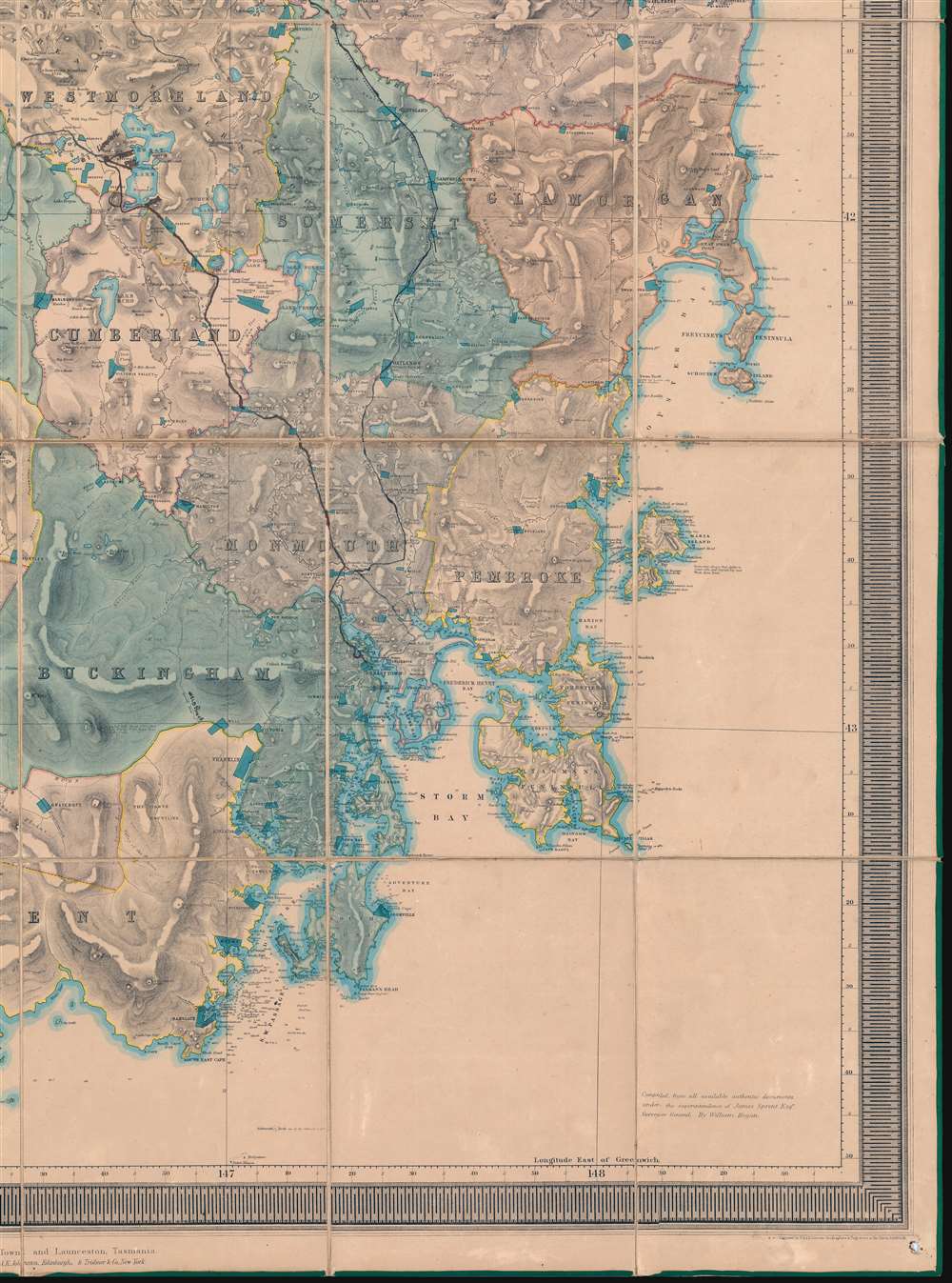 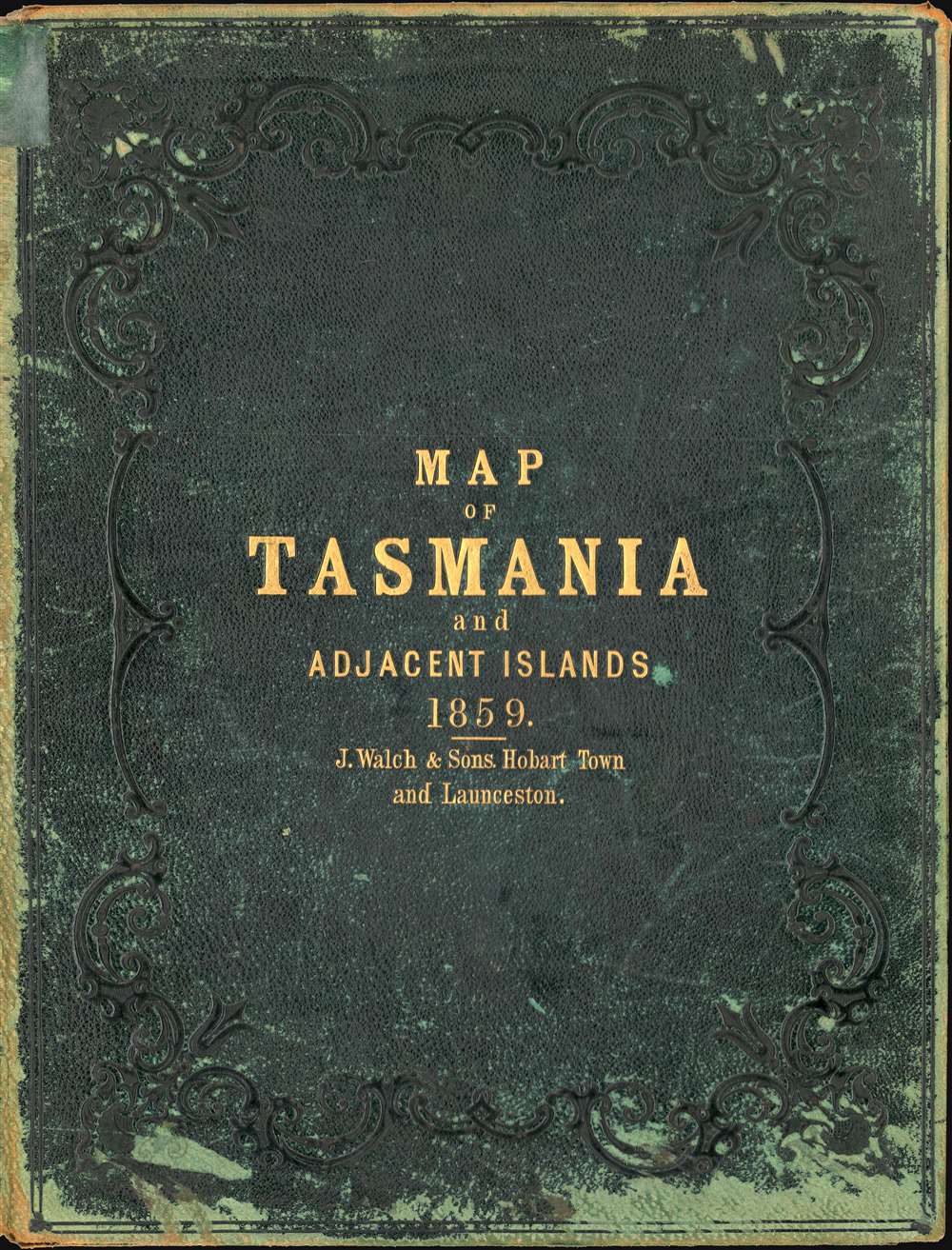 The first, largest, best colonial and settlement era map of Tasmania. This is the James Sprent / William Hogan 1859 map of Tasmania in its deluxe large-format presentation edition. It is the product of nearly 20 years of meticulous trigonometrical survey work and covers all of Tasmania with a heretofore unprecedented degree of precision. The map features manuscript annotation of several voyages dating to the 1920s, underscoring its enduring significance as the best reconnaissance of Tasmania more than 70 years after its issue.

The British settlement of Tasmania began around 1803 when several convict convoys were sent there. By 1919, there were about 5000 Europeans living in Tasmania - to the detriment of the indigenous Tasmanians. Settlement, nonetheless, did not begin in earnest until 1920, when Tasmania opened to free settlers, many of whom were lured by the promise of land grants and free convict labor. Land grants and settlements were surveyed piecemeal with varying degrees of precision - a practice that by 1830 devolved into a wave of disputes related to overlapping grants. The major issue, the governors recognized, was the lack of a precise trigonometrical survey, akin to the Survey of India, which would allow for more accurate fixing of borders and land grants. A survey was promptly ordered and by 1832 a baseline was established near Hobart. In 1833, James Sprent and James Erskine Calder (1808 - 1882) were contracted to begin the meticulous work of performing a complete trigonometrical survey.

From 1833, Sprent and Calder committed themselves to the survey, traveling throughout Tasmania, establishing baselines, and building cairns (many of which survive today) at high points to act as trigonometrical relays. While survey word was ongoing, Tasmania was descending into a deep economic depression. The arctic explorer Sir John Franklin (1786 - 1847) was made Lieutenant-Governor of Tasmania in 1837 and, citing penury, immediately suspended the survey. Franklin was dismissed from office in 1847 on the charge of 'petticoat domination' for apparently discussing state matters with and listening to the advice of his wife, Lady Jane Franklin (1791 - 1875).

Sir William Thomas Denison (1804 - 1871) arrived in Tasmania to take over as Lieutenant-Governor in 1847. Despite the colony falling into ever deeper financial ruin, Denison reinstated funds for the survey. Sprent and Calder were called out of their Hobart Town offices and sent back into the field. Work continued for another ten years. Finally, in 1858, the surveyor and draftsman William Hogan (1805 - July 30, 1870) was contracted to compile the world into a single large-scale map.

The manuscript draft was sent to W. and A. K. Johnston in Edinburgh for engraving and printing. Period documentation suggests this map was printed in color with four complete sets of plates, corresponding to each color - Red, Yellow, Green, and Black. Our own analysis of the printing confirms that it was indeed printed in color. Additional highlighting to emphasize territory boundaries, the water line, and established communities was added by hand. This was thus one of the first commercial maps to be issued using the nascent chromolithographic process. Due the expense of engraving multiple plates for each color group, chromolithography was an uncommon medium for maps - especially maps of this size, generally being reserved for smaller scale advertising, children's books, and decorative printing.

There are several manuscript annotations on the map tracing several voyages. The most impressive is a long trek from Hobart to The Great Lake, then winding west, skirting the north end of Lake St Clair, to Queenstown - a route that could not be followed today due to much of this region being submerged. Queenstown itself had not been founded when this map was made, nor was this region significantly explored. The route notes various significant and evocative locations that may help further date the voyages and reveal something of the voyager. The most significant such is 'The Iron Hut', between Lake St. Claire and Queenstown, developed provisioning depôt for travelers to the Kings River goldfields in the early 20th century. It also names Liawenee and shows the Liawenee Canal, connecting the Great Lake to the Ouse River, constructed in 1919. This and the use of 'Queenstown' likely dates the voyage to the 1920s. While we have not been able to determine exactly who made these voyages, the fact that this map was used as late as the 1920s, underscores it's lasting integrity and long-term significance.

Other noted voyages include travel between Hobart and Launceston. Another short trip from Brighton to Bellerive, with a detour to Richmond. Also, a trip from The Great Lake north to Deloraine.

This map was drafted by William Hogan based upon more than 25 years of survey work by James Sprent and James Erskine Calder (1808 - 1882). It was engraved and printed in Edinburgh by W. and A. K. Johnston. Below the lower border are a list of establishments where the map was available for order, including J. Walch and Sons (Hobartown), Edward Stanford (London), W. and A. K. Johnston (Edinburgh), and Trübner (New York). The map is rare and cataloged in only 4 institutions: the University of Oxford, the University of Queensland, the State Library of New South Wales, and the National Library of Australia.

James Sprent (1808 - September 22, 1863) was an English surveyor and mapmaker active in Tasmania in the mid-19th century. Sprent was born in Manchester, England, and received degrees at Glasgow University (1825) and St. John's College, Cambridge. He emigrated to Tasmania in May of 1830 hoping to take advantage of free land grants. On arrival he established a school for boys in Hobart Town - and from 1832, for girls as well. Sprent' application for a land grand was refused in 1833, but at the same time he was appointed to begin work on the first large-scale trigonometrical survey the island. Sprint and another surveyor, James Erskine Calder (1808 - 1882), worked on the survey for 4 years before it was paused and defunded in 1837. He nonetheless maintained his government position as 'Assistant Surveyor' and was assigned in 1841 to complete a detailed survey of Hobart Town. The survey was reinstituted in 1847 under lieutenant-governor William Denison (1804 - 1871). For the next 10 years Sprent and Calder meticulously surveyed the entire island. In 1857, military surveyors in Tasmania were replaced by civilian surveyors and Sprent was elevated to Surveyor-General. The work was finally published in 1859. Sprent retired in the same year, due to ill health. His heath continued to decline until he died in his Hobart home in 1863. Learn More...


William Hogan (1805 - July 30, 1870) was a surveyor, mining engineer, and draftsman active in Tasmania, Australia, in the second half of the 19th century. In 1856, Hogan received a land grand of 'one acre and 25 parcels' in the 'Township of Welsh'. Welsh was apparently a township planned in the vicinity of Gardeners Bay Inlet that never materialized. Little else is known of this elusive figure. He appears on government payrolls on and off in the mid-19th century, but not consistently. In 1858 he was contracted to compile the Sprent/Calder surveys into the first large-scale trigonometrical map of Tasmania. Learn More...

Good. Laid on original linen and accompanied by original leather binder. Even toning throughout with some edge wear. Pinholes at edges suggested this was wall mounted at some point.