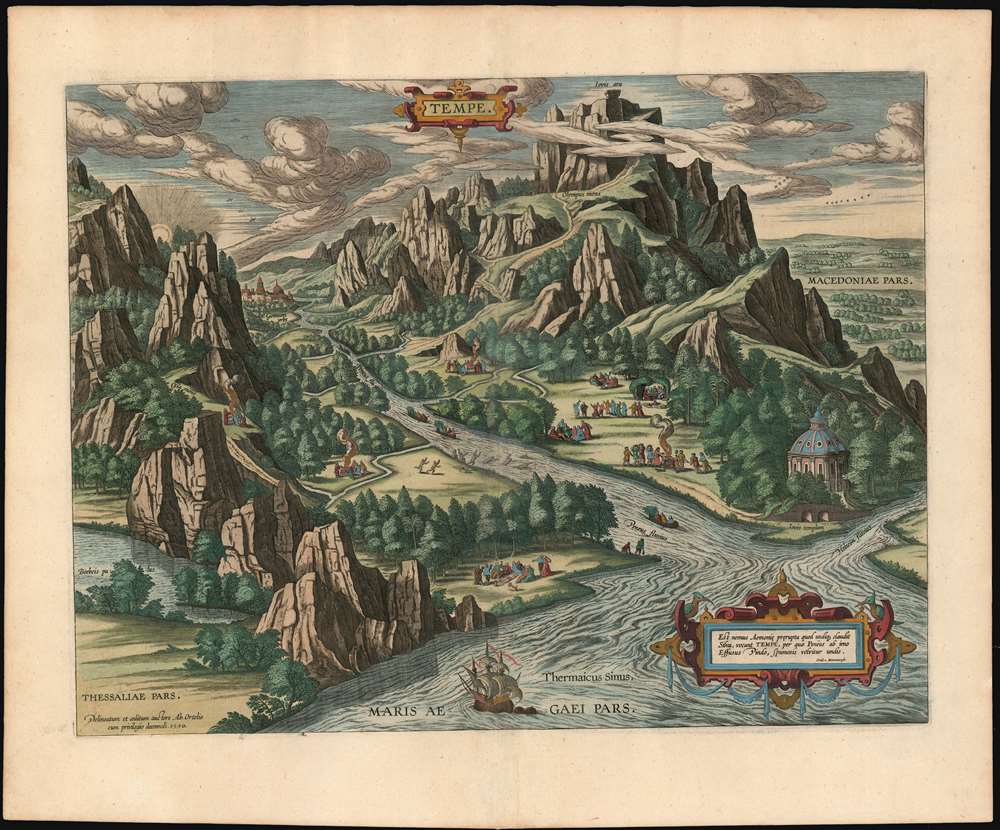 The Paradisiacal Vale of Tempe, in the Coastal Mountains of Greece

This is a lush example of Ortelius' 1590 engraving of the Vale of Tempe in Greece, overshadowed by Mount Olympus. The narrow valley of Tempe, or Témbi as it is now known, is a river valley situated on the coast of the Aegean Sea, and pierces the mountainous border between ancient Macedonia to the north and Thessaly to the south. The view centers on the river Pineiós (Peneus on the view) and its tributaries, and is oriented to the west. To the south is depicted mount Ossa; to the north, mighty mount Olympus towers over the valley. The mountains and their forbidding cliffs frame the beautifully wooded river Pineiós, emptying into the Aegean. In legend, this rift was formed by an earthquake caused by a blow from Poseidon's trident. (Geologists call it a fracture ravine, caused by the action of the river and its tributaries.) The verdant beauty of the valley - and it is still so - led the ancient Greeks to dedicate the valley to the cult of Apollo. (Ortelius has also included a temple to Jove, at the mouth of the river.) Along the banks, in the woods and in meadows are shown groups of people offering burned sacrifice, dancing, playing music, and plunging naked into the stream. Ortelius describes the scene as a place 'where people dwell, meet in companies, and having done divine service and ceremonies in due form and manner, they banquet and make merry.'

Another Way to Look at a Valley

What is not depicted in the view is that this beautiful valley represented - as the best access between the coast of Macedonian Greece to the plains of Thessaly - a natural and traditional invasion route. Byzantine Greeks called this lovely place 'The Wolf's Mouth.' Ortelius, in choosing to emphasize the classical and mythological aspects of the place, declines to show the ruined castles and fortifications dating from the Roman era to the Middle Ages that were to be found here even during the second World War.

Ortelius's depiction, drawn primarily from classical historical and literary sources such as Ovid, Varro, Herodotus and Pliny, is remarkable in being one of the engravings entirely his own work. While Ortelius was notable for his assiduous presentation of the best available contemporary geographical sources, he relied on his own composition when it came to the maps and views pertaining to ancient history, biblical history and classical myth.

This engraving was first printed in 1590 as a separate issue, and then included both in Ortelius' Parergon and in his Theatrum Orbis Terrarum. There are two known states of this piece: In 1601, the plate was reworked to improve both the engraving of the sky and the trees. This second state example was included in the 1603 Theatrum which its publisher, Vrients, called 'Editio Ultimo' (As it happened, four further editions would be published.) About twenty examples of the map appear in OCLC as a separate. Ortelius' atlas is well represented in institutional collections.

Ortelius, A., Theatrum Orbis Terrarum, (Antwerp) 1603.     Abraham Ortelius' magnum opus, Theatrum Orbis Terrarum, was the world's first regularly produced atlas, which 'set the standards for later atlases . . . It was the first undertaking of its kind to reduce the best available maps to an uniform format.' (Koeman) A modestly-sized work of fifty-three maps in its first edition of May 1570, it was an immediate success: there were three further editions that year, and the work remained in print for a total of 32 editions, the last of which was 1641, well after its author's 1598 death. Ortelius added to his atlas constantly, and by 1595 the Theatrum contained 147 maps. Ortelius is renowned generally as an editor, and indeed much of the Theatrum is compiled from a variety of sources: in such cases, Ortelius was scrupulous in naming his sources. But Ortelius was also a mapmaker in his own right: many of his maps are a distillation of various sources into his own work, and there were many maps - particularly in his atlas of Biblical and ancient history Parergon - which were entirely Ortelius' work. In his role as an editor, Ortelius followed in the footsteps of Munster, whose Cosmographia was, until Ortelius, the best window on the world for the curious European reader. In terms of the artistry of his maps, Ortelius oversaw the first great flourishing of copperplate engraving in the service of cartography to occur in Northern Europe. Ortelius' work provided the model for the atlases of Mercator, Hondius, Blaeu and all their progeny in the 17th century - many of whom were to produce faithful editions of Ortelius' maps in their own productions.