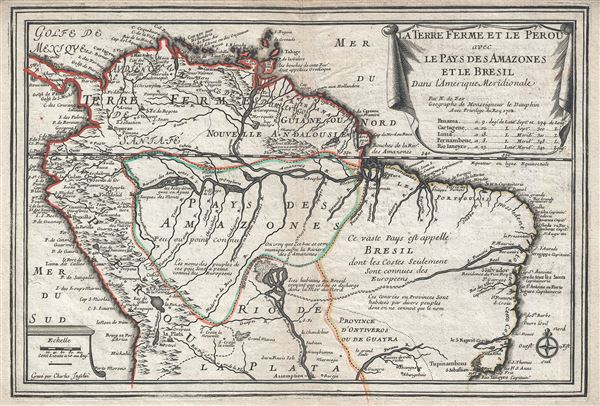 This is a scarce and beautiful example of Nicholas De Fer's 1702 map of northern South America. It covers from Panama to Rio de Janeiro and renders the entire region in extraordinary detail offering both topographical and political information with mountains beautifully rendered in profile.

This map, like most early maps of the area, contrasts a detailed mapping of the coast with a speculative discussion of the interior, particularly the Amazon Basin. It offers a fairly accurate mapping of both the east and west coasts with exceptional detail in the populated Andean regions of Columbia, Ecuador (Labeled Quito), and Peru. Lima, Quito, Valladolid (Valadolid), Arequipa, Trujillo (Truxilla) and other important trading centers of the region are noted. In Portuguese controlled Brazil, Rio de Janeiro, San Salvador and San Sebastian are noted. Lake Maracaibo, in modern day Venezuela, is slightly malformed and elongated.

The interior is where this map gets interesting. De Fer's mapping of South America's interior is full of inaccuracy, curiosities, and ample fodder for the gold hunting European. Our survey of this map begins with De Fer's fairly accurate mapping of the of the Amazon and Orinoco River systems - though he does erroneously connect the two, an understandable error common to maps of the period. He also drops the popular myth of Lake Parima and Eldorado in Guyana, but maintains the apocryphal Lake of Xarayes as the northern terminus of the Paraguay River.

The Xarayes, a corruption of 'Xaraies' meaning 'Masters of the River,' were an indigenous people occupying what are today parts of Brazil's Matte Grosso and the Pantanal. When Spanish and Portuguese explorers first navigated up the Paraguay River, as always in search of El Dorado, they encountered the vast Pantanal flood plain at the height of its annual inundation. Understandably misinterpreting the flood plain as a gigantic inland sea, they named it after the local inhabitants, the Xaraies. The Laguna de Xarayes almost immediately began to appear on early maps of the region and, at the same time, almost immediately took on a legendary aspect as the gateway to El Dorado. To the east and north of this lake, De Fer speculates connections to the Amazon and the St. Francois rivers. He includes two notes, one stating that 'It is believed that the Lake communicates with the Amazon' and the other reads 'The inhabitants of Brazil believe that the Lake discharges in the North Sea.'

Altogether this is a spectacular map of the region. This map was engraved by Charles Inselin and created by Nicholas De Fer for his 1701 Atlas.

Very good. Minor wear and toning along original centerfold. Original platemark visible.
Looking for a high-resolution scan of this?