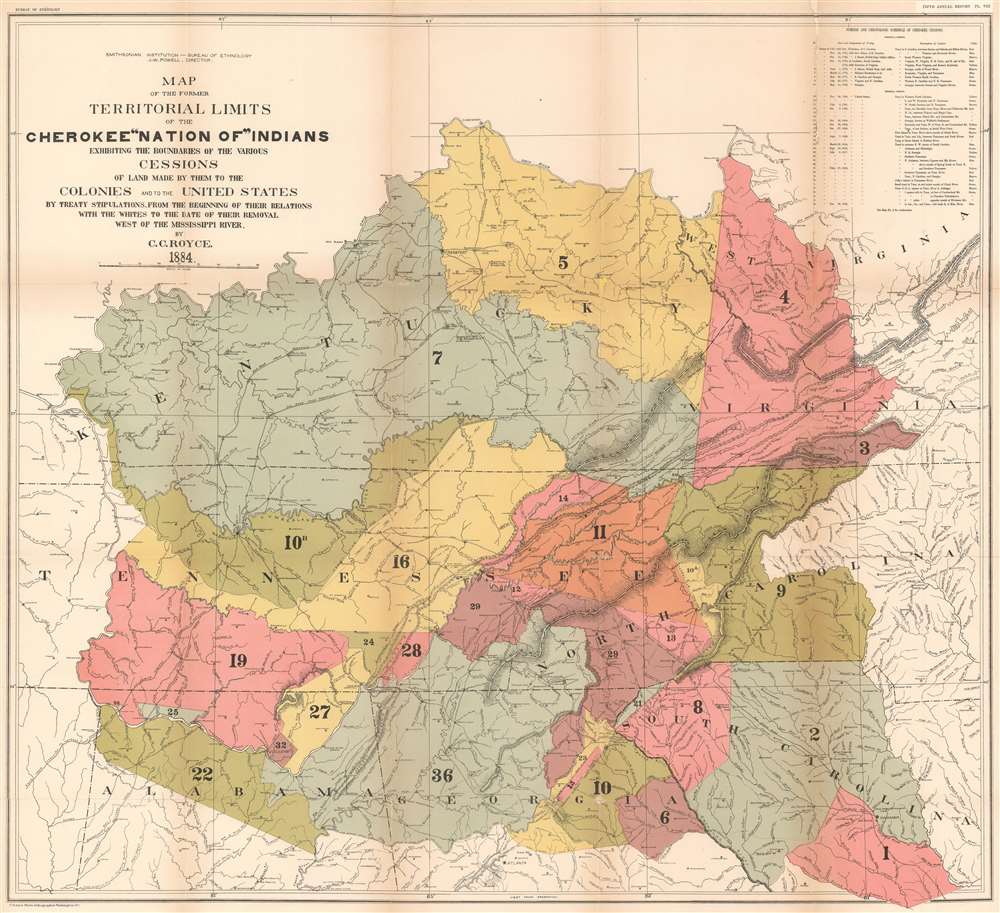 Illustrates the many land cessions from the Cherokee Indians to the American Colonies and then the United States government in the 18th and 19th centuries.

Map of the former Territorial Limits of the Cherokee 'Nation of' Indians Exhibiting the Boundaries of the Various Cessions of Land Made by Them to the Colonies and the United States by Treaty Stipulations. From the Beginning of Their Relations with the Whites to the Date of Their Removal West of the Mississippi River.
1884 (dated)     29.25 x 32 in (74.295 x 81.28 cm)     1 : 1000000

This is an 1884 Charles C. Royce map of the cessions of the former lands of the Cherokee Indians before they were removed west of the Mississippi. The map depicts the region from west of the Tennessee River to Virginia, North Carolina, and South Carolina, and from the Ohio River to Alabama, Georgia, and South Carolina. Thirty-six different cessions, dating from the colonial period through the 1830s, are traced here, each numerically identified and shaded a different color to allow for easier differentiation. These numbers correspond with an index situated in the upper right corner which provides the viewer with the date and designation of the treaty, a description of the cession, and the color it is shaded. This creates a visual summary of how the Cherokee lost this land during the 18th and 19th century before ultimately being forcibly relocated to lands west of the Mississippi.

These cessions are superimposed on a map that also labels the cities, towns, rivers, and mountain ranges, allowing viewers to have a better understanding of the geography of the cessions in relation to 'modern-day' landmarks. Nashville, Frankfort, Louisville, Lexington, Atlanta and Cincinnati are all identified. The 'Old Road from Nashville to Falls of Ohio' and the 'Old Road from Nashville to Lexington' are both illustrated, along with several others, including 'General Jackson's Old Military Road' and the 'Route of General Robertson's Expedition Against the Indians'.

This map was created by Charles C. Royce and published by the Bureau of Ethnology in the Fifth Annual Report in 1884. We are aware of examples in the institutional collections of Pennsylvania State University, the Dickinson College Library, the Arkansas State Archives, and the Osher Map Library at the University of Southern Maine.

Charles C. Royce (December 22, 1845 - February 11, 1923) was an American author, ethnographer, cartographer, and businessman. Born in Defiance, Ohio, Royce enlisted in the U.S. Navy three month before his nineteenth birthday. He served as Acting Master's Mate on the monitor U.S.S. Neosho during the last months of the U.S. Civil War. After his honorable discharge from the Navy, Royce elected to seek employment in Washington, D.C., where he found a job as a clerk in the Office of Indian Affairs. John Wesley Powell, the first head of the Bureau of Ethnology, became aware of Royce's work concerning Indian land cessions, and helped Royce pursue his work. Powell provided funds for research trips and borrowed books for Royce from the Library of Congress. In February 1883, Royce gained an appointment as an ethnologist in the Bureau of Ethnology, but chose to leave Washington, D.C. and return to Ohio the following year, where he found work as an accountant at the Miami County Bank. Royce submitted the manuscript of his work The Cherokee Nation before returning to Ohio, and was disappointed when its publication was delayed for a year. The Cherokee Nation is regarded as a valuable contribution to literature about the American Indian, as is his monumental Indian Land Cessions in the United States, which was also published by the Bureau of Ethnology. Royce became the manager of Ranco Chico, a California fruit ranch, in 1888. He retired in 1912, and moved back to Washington, D.C., where he suffered from ill health until his death. He married Isabella Harter in 1871 and the couple never had any children. Learn More...


The Bureau of Ethnology (1879 - 1965) was a bureau of the United States government tasked with transferring the records, archives, and other materials relating to Native Americans from the Interior Department to the Smithsonian Institution. The bureau's visionary founding director, John Wesley Powell, saw the bureau's mission as a much broader endeavor. He believed from the start that the bureau's mission was 'to organize anthropologic research in America'. Under Powell's leadership, the bureau sponsored ethnographic, archaeological, and linguistic field research; organized research-intensive multi-year projects; promoted the fledgling discipline of anthropology; and initiated publication series, including its Annual Reports and Bulletins. The bureau also collected anthropological samples for the Smithsonian United States Museum and prepared exhibits for expositions. The bureau's name changed in 1897 to the Bureau of American Ethnology, indicating the scope of its work, and in 1965 the Bureau of American Ethnology merged with the Smithsonian's Department of Anthropology to for the Smithsonian Office of Anthropology within the United States National Museum (today known as the Department of Anthropology, National Museum of Natural History). Learn More...

Good. Backed on archival tissue for stability. Wear and toning along original fold lines. Areas of infill along fold lines and at fold intersections. Blank on verso.