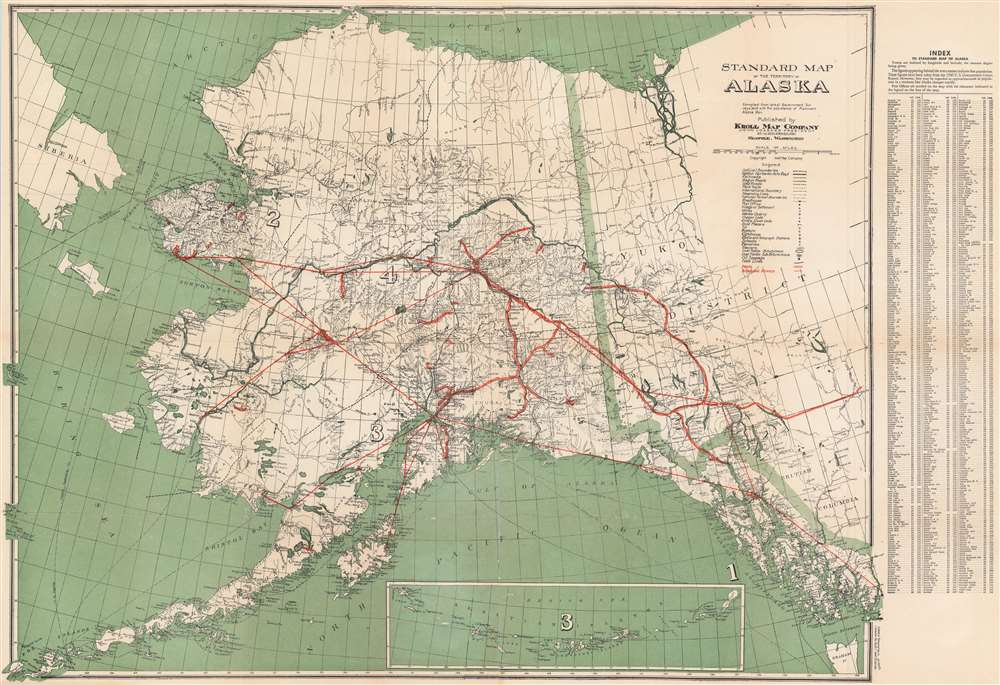 A large and detailed piece, this c. 1940 Kroll Map Company map of Alaska illustrates the territory before it became a state. Depicting the region from Siberia to the Yukon Territory and from the Arctic Ocean and the town of Barrow to Unalaska Island, cities and towns are identified throughout, including Anchorage, Juneau, Seward, and Fairbanks. Roads are illustrated in several different ways, with some noted using two solid parallel red lines, while others, like the Valdez-Fairbanks Auto Road, wagon roads, and sled roads, use a variety of black lines. The Valdez-Fairbanks Road, for example, is solid black, while the sled roads are illustrated using two parallel dashed lines. Proposed air routes through Alaska, which must have been a priority given the global political climate of 1940, are marked by single solid red lines. Alaska's seemingly unending supply of natural resources is also cataloged, with different notations used for marble, tin, gold, copper, coal, and oil deposits. Judicial districts are also noted. An inset map of the Aleutian Islands is situated along the bottom border and depicts the island chain from Umnak Island to Attu Island. An index of towns is situated along the right border, locating each by its latitude and longitude coordinates.

This map was created and published by the Kroll Map Company c. 1940. This map is present in six institutional collections: Yale University, Harvard College, University of Minnesota, Minneapolis, the Denver Public Library, the University of Alaska Fairbanks, and the David Rumsey Map Collection at Stanford University.

Kroll Map Company (1911 - Present) is a Seattle-based map company. Founded in 1911 when Carl Kroll acquired both Anderson Map Company and Washington Map and Blueprint Company, both of which had been in business since the 1870s. From its inception, Kroll Map Company has ‘focused on mapping for real estate and local government, custom mapping, and the publication of numerous general mapping products.’ Carl Kroll sold a half-share of the company to John Loacker, his close friend and employee, in 1920. Loacker then purchased the company outright in 1925. He maintained the feel of a family business by working with his son Waldemar, who eventually took over. Waldemar J. Loacker (April 16, 1902 - February 12, 1995) worked at Kroll for the rest of his life, only leaving the company after suffering a stroke in 1992. Then his son John Loacker (b. 1955), who began working at Kroll in his youth, officially inherited the business and continues operating it to this day. In 1999, Kroll Map Company and Metsker Maps of Seattle formed a partnership of ‘two historic Seattle businesses.’ Today, the Kroll Map Company creates custom maps for individuals worldwide.

Good. Backed on archival tissue for stability. Blank on verso.