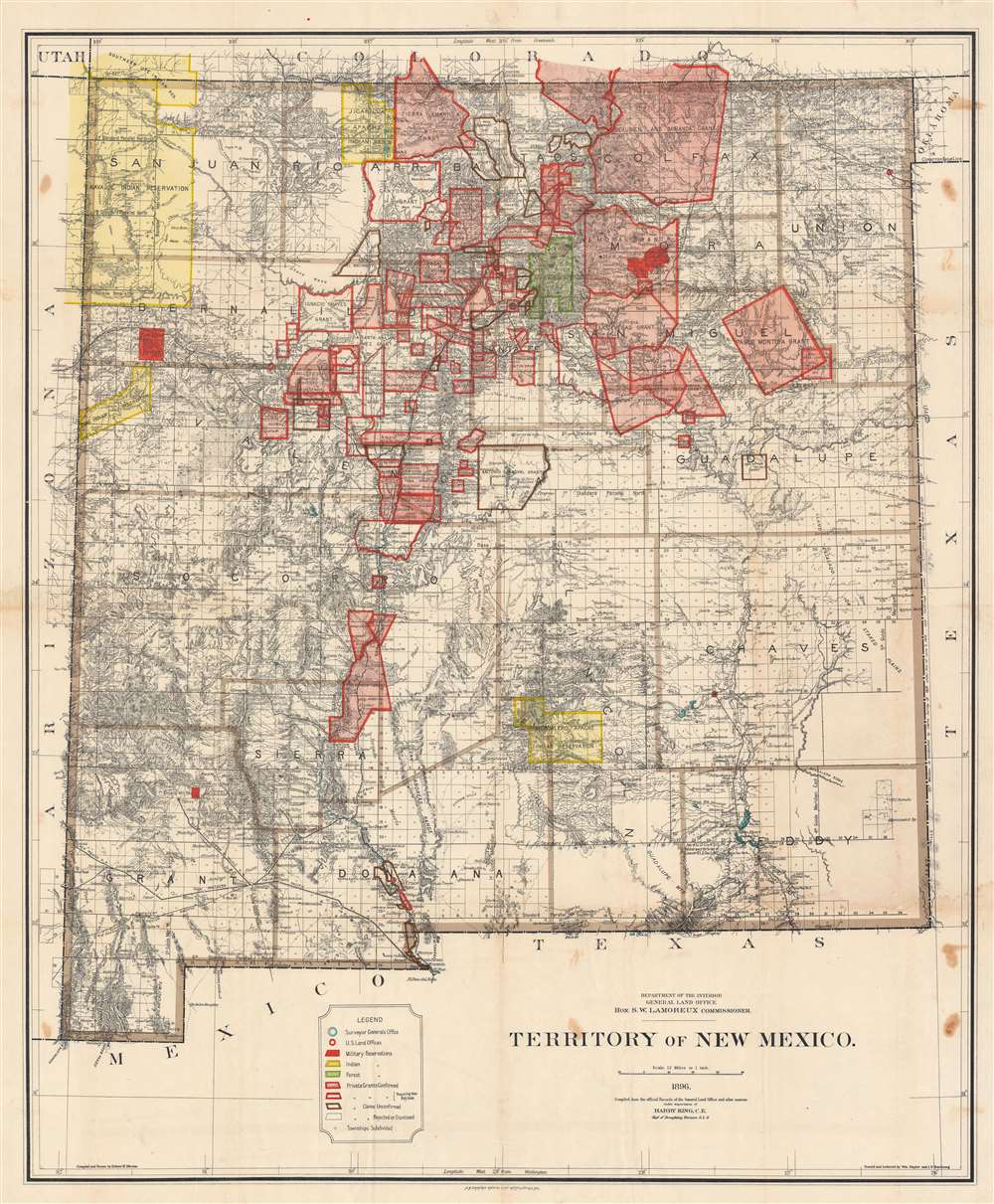 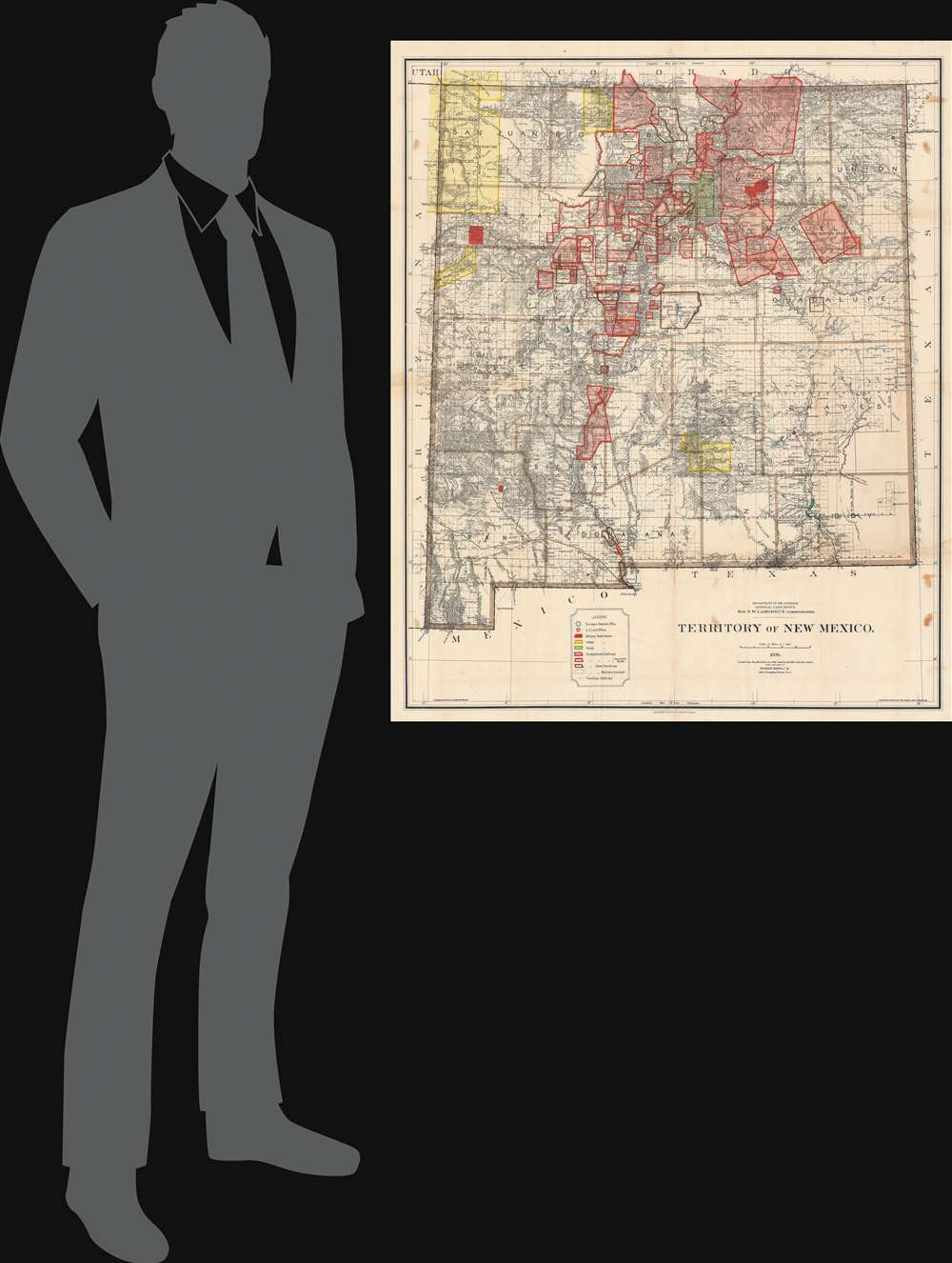 This is a large and detailed 1896 Robert H. Morton and General Land Office map of the New Mexico Territory. The map highlights private land grants, American Indian reservations, military bases, and forest reserves. Of greatest interest are the illustrated land grants, including the Tierra Amarilla Grant, the Beaubien and Miranda Grant, and the Mora Grant. Other annotations represent private grants that required new boundary surveys, were unconfirmed, or that had been rejected or dismissed by the U.S. government. Yellow areas represent reservations granted to the Jicarilla Apache, the Navajo, the Southern Ute, the Zuni, and the Mescalero Apache.

Before the New Mexico Territory became part of the United States after the Mexican-American War (1846 - 1848), New Mexico (Nuevo México) was a part of the Spanish Empire from 1598 - 1821, and then a territory of independent Mexico from 1821 until the 1846 Treaty of Guadalupe Hidalgo ceded it to the United States. First the Spanish and then the Mexican government granted land concessions to individuals as a reward for meritorious service, as well as communal settlement grants - mostly in an effort to develop the sparsely populated region. More than 150 land grants were awarded by the Spanish and Mexican governments, totaling some 9.3 million acres. After the U.S. gained control of New Mexico, they did not have a process for recognizing the land grants, even though they were guaranteed in the treaty.

The Contentious History of the Tierra Amarilla Grant

In 1832, Manuel Martinez petitioned the Governor of New Mexico for a tract of land called Tierra Amarilla. Situated on the Chama River, Martinez sought the land for agricultural and ranching purposes on behalf of himself, his eight sons, and all who may accompany him. After a dispute between Martinez and the town council of Abiquiu, the closest settlement to the proposed grant, the Provincial Deputation granted the land to Martinez, although the Alcalde of Abiquiu failed to deliver possession of the grant (the paperwork) to Martinez because they feared attacks from the local Native Americans.

History Pertaining to the Grant

In 1856, following the annexation of the territory that now makes up New Mexico and Colorado into the United States, Francisco Martinez, one of Manuel Martinez's heirs, filed a petition with the Surveyor General's office seeking confirmation of the Tierra Amarilla Grant. Surveyor General William Pelham investigated Martinez's claim and in a September 25, 1856 decision stated that his office was satisfied that

the Provincial Deputation had authority under the laws of Mexico to make donations of land to individuals, that the title papers evidencing the grant had been proven to be genuine, and that the Failure of the Alcalde of the Town of Abiquiu to deliver possession to Martinez did not invalidate the grant since such a failure had been satisfactorily explained

and recommended its confirmation by Congress. The grant was confirmed as Private Land Claim No. 3 by an act of Congress approved June 21, 1860.

John M. Isaacs, one of the owners of the grant at the time, submitted a request to the Surveyor General on June 30, 1875 that the grant be surveyed in order that a patent might be issued. After another legal battle, the grant was surveyed by Deputy Surveyors Sawyer and McBroom in July 1876. The survey concluded that 594,515.55 acres were contained within the grant and that part of said grant lay within the State of Colorado. On February 21, 1881, the grant was patented to Francisco Martinez.

The General Land Office began producing large format maps of the New Mexico Territory as early as 1879 through 1911. New Mexico became a state the next year. Numerous editions were published, with each subsequent edition illustrating a greater degree of detail throughout the state.

This map was compiled and drawn by Robert H. Morton and traced and lettered by William Naylor and I. P. Berthrong under the supervision of Harry King for the General Land Office in 1896. It was printed by A. B. Graham Photo Lithography. This map is well represented in institutional collections but is rare on the private market.

Robert H. Morton (August 1844 - December 26. 1901) was an American draftsman. Born in Sandusky, Ohio, Morton served in the 133rd Ohio Volunteer Infantry during the American Civil War. Morton was appointed as a draftsman in the General Land Office on July 11, 1870, and worked for the Land Office until at least 1900. He is buried in Arlington National Cemetery. Morton married Margaret Amelia Jacobi (September 1848 - February 20, 1902) on September 5, 1876, with whom he had a daughter, Ada, who was born in July 1877. Learn More...


Ithamar Parsons Berthrong (February 26, 1853 - July 29, 1936) was an American surveyor, inventor, and draftsman active with the General Land Office of the U.S. Department of the Interior. Berthrong was born in Rochester, New York. He was made chief of the drafting division on March 23 of 1907. He is associated with many of the most important early 20th century maps issued by the GLO, among them, important maps of Arizona, Colorado, Wyoming, Oregon, Washington, and more. Learn More...


Harry King (18xx - 19xx) was an American draftsman. King worked as Chief of the Draftsmen's Division of the General Land Office from at least 1895 and is credited with supervising the creation of numerous maps during his tenure. He was fired (or as it was put in one newspaper 'bounced to the exterior') by the Secretary of the Interior in January 1903 for corruption (he was making maps for individuals outside the Land Office during office hours and getting paid for it) and reportedly asking a female employee questions unrelated to her work (likely 1902 - 1903 newspaper speak for sexual harassment). King denied all the charges against him. We have been unable to locate any other information concerning King or his career. Learn More...


Andrew B. Graham (1845 - September 9, 1909) was an American lithographer active in Washington, D.C. in late 19th and early 20th century. Graham was born in Washington D.C., the son of a lithographer and engraver. After college, he joined the U.S. Coast Survey, where he was a draftsman until 1889. He retired from the Coast Survey to take over management of his father's lithography firm. The firm, Andrew B. Graham Company, was one of several that thrived on lucrative government publication contracts. Graham died of 'brain fever' in his Washington D. C. residence on September 9 of 1909. Some of his work was republished posthumously until about 1917, and his firm was active until at least the early 1920s. Learn More...

Good. Wear along original fold lines. Some soiling and dampstaining. Areas of infill at some fold intersections.