1846 Bradford Map of the Republic of Texas (after Austin) 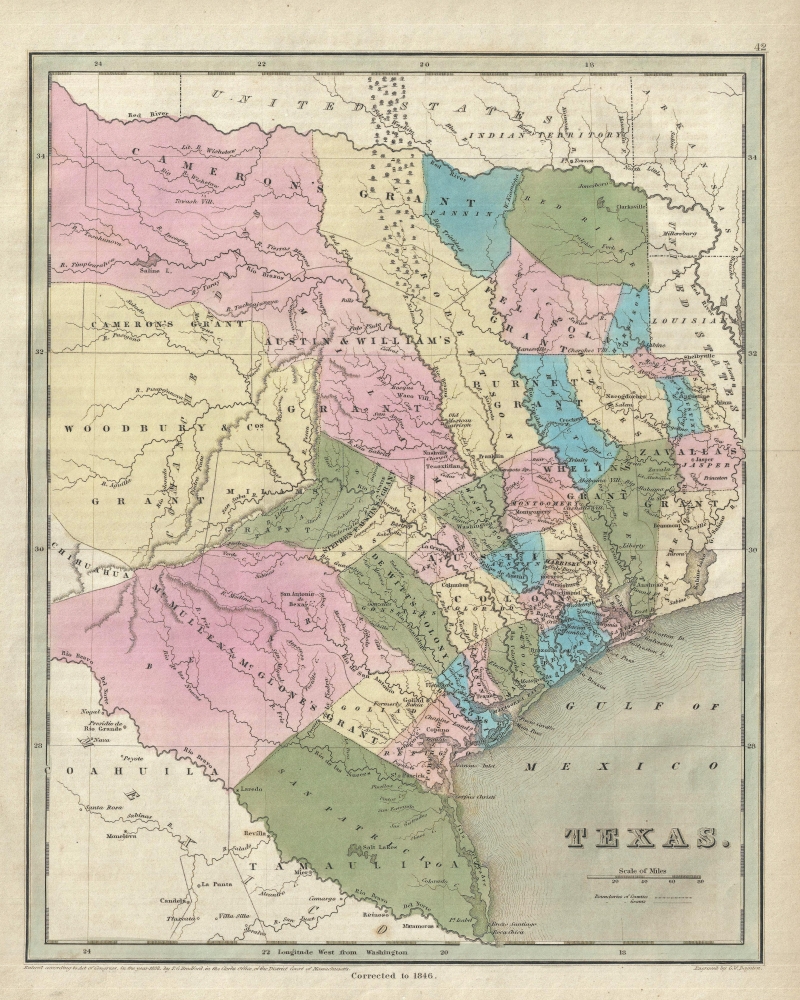 1846 Bradford Map of the Republic of Texas (after Austin)

This is Thomas Gamaliel Bradford's important 1846 map of Texas, issued at the end of the Republic of Texas period and of the Mexican American War (1846 - 1848). The map covers the eastern three-fourths of modern Texas, extending from the Red River to the Rio Grande and from Mexico to Lake Sabine and the United States. It names both newly established counties and the empresario land grants following Stephen F. Austin's map of Texas issued in the same year.

Bradford's maps of Texas, published in various sizes and editions from about 1838 to 1847 were regularly updated and, as a whole, offer an overview of Texas from its declaration of independence from Mexico in 1836 to its 1846 decision to join the United States. The present map is late in the series, being issued in the final days of the Republic just prior to being annexed into the United States and the beginning of the Mexican American War.

Bradford's map of Texas closely follows the 1846 final edition of Stephen F. Austin's Map of Texas and is, indeed, the only contemporaneous derivative of the Austin map reasonably obtainable. Like Austin's own map, it occupies a central place in the history of Texas, being widely distributed throughout the United States. With its appended text extolling the virtues and climate of Texas, this readily available map significantly influenced the Anglo-American settlement of Texas and ultimately the Annexation.

Like the Austin map, early editions of Bradford's map illustrate various empresario grants, including Austin's own. These are still apparent on the present map, but have overlaid with the distinguishing characteristics of an increasingly developed country, including the beginnings of a sophisticated county structure, newly established roads, and other features.

The 1838 copyright on this map corresponds to the first edition - as Bradford did not want to invest to update the legal registration despite numerous annual updates. A note under the bottom border identifies this map as being corrected to 1846. It was engraved by George Washington Boynton and published as plate no 42 in the 1846 large format edition of Bradford and Goodrich's A Universal Illustrated Atlas.