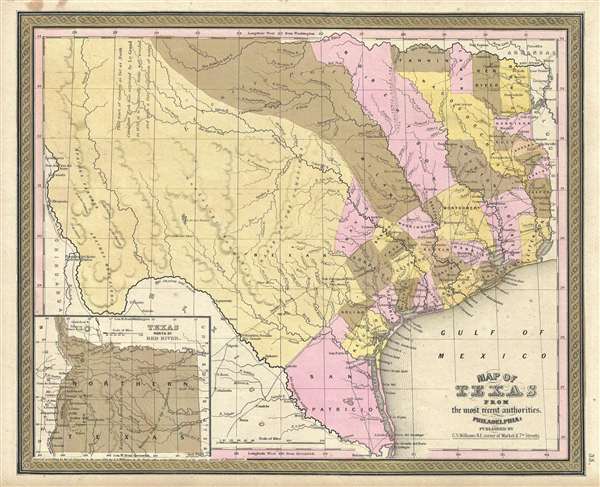 Map of Texas at its fullest extand issued just before the Comprimise of 1850.

A fine example of the scarce 1849 Samuel Augustus Mitchell Map of Texas. Based upon the Tanner/Williams map of 1847, this map covers all of Texas according to the original 1836 claims of the Republic of Texas. This includes a vast territory extending from the western Rio Grande to the Sabine River and from the Arkansas River to the mouth of the Rio Grande as it enters the Gulf of Mexico. This included much of modern day New Mexico as far west as Santa Fe. Here the map is clearly divided between Bexar County, in yellow, and the more populated parts of Teas to the east. The county structure there is sophisticated and reflects numerous updates and revisions over the original 1847 Tanner plate.

One year after this map was drawn, the Compromise of 1850, in which much of Texas's western territory would be sacrificed to the federal government in exchange for that entity paying of the state's war debt, dramatically and permanently changed Texas's cartographic profile.

This map was issued in the 1849 edition of S. A. Mitchell's New Universal Atlas. It retains the original 1845 C. S. Williams copyright. This was the last edition of that atlas to be published by Mitchell prior to selling the plates and rights to the atlas to Thomas Cowperthwait late in 1850.


C. S. Williams (1800 - 18??) was an American engraver and publisher active in Philadelphia during the middle part of the 19th century. Williams is elusive and we have been unable to definitively isolate much information about him. He may have been born in New York. He engraved for Her Schenck Tanner (1796 0 1858) and his imprint and copyright is associated with several important Tanner atlas maps issued between 1845 and 1846. Similarly, his imprint carries over to Tanner legacy maps issued by Samuel Augustus Mitchell (1792 - 1868) maps until about 1850. There are references to an engraver by the name of C. S. Williams in New Haven, Connecticut, active in the 1830s, as well as to a C. S. Williams active in Ohio from around 1850, where he published a various city directories, including one for Cincinnati, Columbia, Dayton, Zanesville, Stubenville, et al.. There is also a C. S. Williams identified as a Surveyor and Land Agent in Iowa City, Iowa, c. 1858. It is unclear if these are the same person, or, completely unrelated individuals. Learn More...