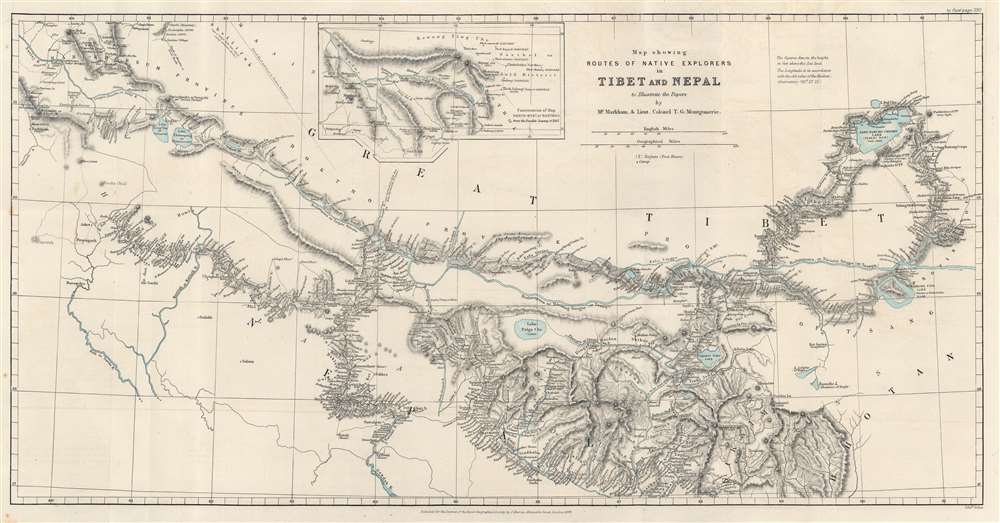 Pundit explorations in Tibet and Nepal.

Discover routes of secret survey and exploration trips in the vicinity of Mount Everest with this 1875 John Murray and Royal Geographical Society map of Nepal and Tibet. Dashed and dotted lines follow the routes of 'pundits', native Indian surveyors employed by the British to secretly survey Tibet and Nepal - areas restricted to the British on pain of death.

Pundits and the Exploration of Tibet

During the 19th century, Britain and Russia were competing over control of Central Asia, a rivalry that has become known as the 'Great Game'. In this context, Britain began the Great Trigonometric Survey of India, but also wanted detailed geographical information about Nepal and Tibet, potential areas of contention north of British India. At the time, Tibet and parts of Nepal, refused entry to westerners. This led Thomas G. Montgomerie to the realization that British trained Indian surveyors probably could gain access to these regions and gather the desired information. One of the first lead explorers, Nain Singh, went by the code name 'The Pundit', as he as formerly a schoolteacher. The term 'Pundit' caught on as a general term for the all Indian intelligence operatives working in Tibet or Nepal.

'The Great Game' was a diplomatic confrontation between the British and Russian Empires over Afghanistan and other territories in Central and Southern Asia. The conflict, rooted in long-standing animosity between Russia and Britain, revolved around Afghanistan, which, while lacking significant resources of its own, was strategically situated. For its part, Russia feared Britain was making commercial and military inroads into Central Asia, an area long within the sphere of influence of St. Petersburg. Britain, conversely, feared Russia making gains in India, 'the jewel in the crown' of British Asia. The escalating tensions led to several wars and proxy wars: The First Anglo-Afghan War (1839 - 1842), the First Anglo-Sikh War (1845 - 1846), the Second Anglo-Sikh War (1848 - 1849), and the Second Anglo-Afghan War (1878 - 1880), along with the Russian annexations of Khiva, Bukhara, and Kokand. Then as now, Afghanistan proved a grinding stone upon which the world's great empires diminished themselves, none achieving a definitive victory despite committing staggering resources. The Great Game 'ended' on September 10, 1895, with the signing of the Pamir Boundary Commission Protocols, which stabilized the border between Afghanistan and the Russian Empire.

Towns, villages, and smaller settlements are labeled throughout, with Lhasa near the right border approximately at center. Mount Everest appears in the lower right quadrant in the detailed mountainous region. Several other peaks are labeled in this area as well, as are others scattered across the entire piece. The region's rivers and lakes stand out in a light blue. Many are identified, including Tengri Nur in the upper right quadrant. An inset of the region north of Gartokh occupies a section along the top border to the left of the title.

This map was created and published by John Murray for the Royal Geographical Society for publication in The Geographical Journal in 1875. We note a single cataloged example of the separate map, at the Princeton University Library.

The Journal of the Royal Geographical Society Vol. 45 (London: Murray) 1875.