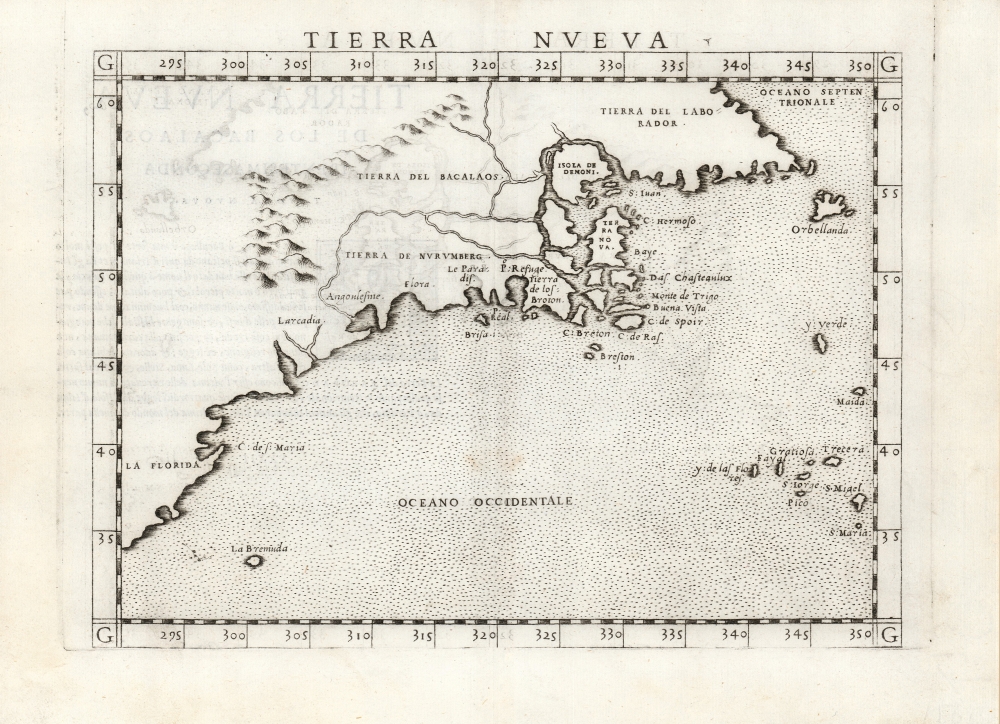 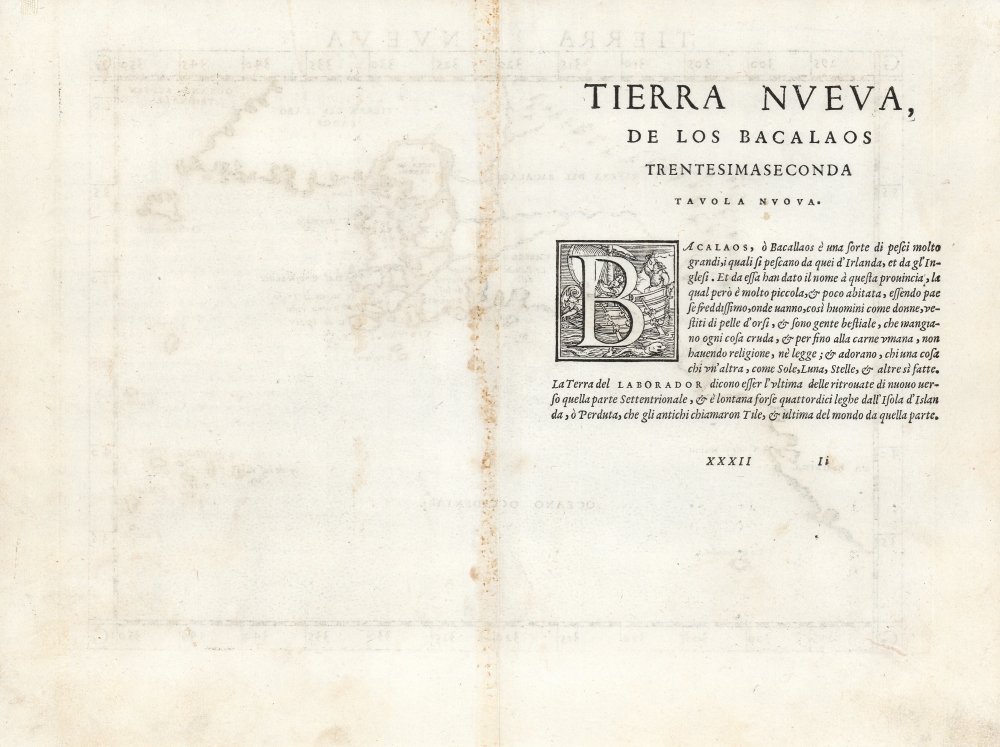 One of the First Acquirable Maps of the North American East Coast in its earliest issue.
$3,000.00

This is the first state, first edition, of Girolamo Ruscelli's 1561 map 'Tierra Nueva', an early and influential map of what would become New England and the Canadian Maritime Provinces. It is among the earliest acquirable maps to cover the eastern coastline of North America. The map spans from upper Florida northwards past Cabo de Santa Maria to Larcadia (Kitty Hawk), Angoulesme (New York Harbor), Nova Scotia, and Labrador. The map is a further development of the 1548 Gastaldi map of the same region. The Gastaldi was limited entirely to the coastline, while Ruscelli's map attempted to show a network of rivers and is among the first regional maps to show mountains in the interior of North America.

The map represents an attempt to reconcile the discoveries of Giovanni Verrazano with those of Jacques Cartier. The southern placenames tend to derive from Verrazano. 'L'Arcadia', named by Verrazano because of its forested beauty, is now assumed to have been somewhere near Kitty Hawk. In the subsequent decades the term 'Larcadia' was applied further and further north until it came to refer to the coasts of Maine and the Canadian Maritimes. Angoulesme was the place name Verrazano gave to New York Harbor (although Andre Thevet, writing in 1550, also takes credit for the term). Flora is most likely the south coast of Long Island. Brisa is almost certainly Block Island. Pt. Refuge is Narragansett Bay. The Chesapeake Bay, Delaware Bay, Cape Cod, and Boston Harbor are notably absent, as Verrazano was forced too far out to sea for fear of reefs to see their entrances.

The point where Verrazano left off did not extend far enough north to be easily connected with the discoveries of Cartier, who sailed south from Labrador into the Gulf of the St. Lawrence. Cartier never sailed south of Prince Edward Island. Verrazano barely skirted the southern tip of Nova Scotia. Thus, the map's rapid transition from the southern extent of New England directly to Cape Breton Island and the eastern Maritimes. The map does present one of the earliest representations of the coast of Maine around the Penobscot River, Nova Scotia, Newfoundland, the Gulf of St. Lawrence, and Labrador. Labrador, here thus labeled as 'Tierra del Labrorador', is recognizable as it juts out into the sea. 'Orbellanda', a term derived from Arthurian legend, is arguably recognizable as Newfoundland. Both are based upon Cartier's explorations.

A notable interior feature of this map is its puzzling upstream conjunction of the Hudson River with the St. Lawrence. Though Gastaldi's 1548 map shows the mouths of these rivers, it neither completes nor joins them. So, it is not clear whether the idea that they might do so was actually Gastaldi's. This construction first appears on Giovanni Battista Ramusio's 1556 La Nuova Francia, and it is equally possible that it was part of the map Gastaldi supplied Ramusio, or that Ramusio added the speculation himself. Verrazzano did not venture far up the Hudson, but Cartier's second voyage went as far as Montreal, so the thought that the rivers might have an association may have derived from those reports. After all, today a network of canals do indeed connect the two rivers.

The New York/Connecticut coastline is marked as Tierra de Nurumberg, a variant of the placename 'Norumbega.' This appellation first comes to light on Verrazzano's 1529 manuscript map of America. He used the term, Oranbega, which in Algonquin means something on the order of 'lull in the river.' The first detailed reference to Nurumbeg, or as it is more commonly spelled Norumbega, appeared in the 1542 journals of the French navigator Jean Fonteneau dit Alfonse de Saintonge, or Jean Allefonsce for short. Allefonsce was a well-respected navigator who, in conjunction with the French nobleman Jean-François de la Roque de Roberval's attempt to colonize the region, skirted the coast south of Newfoundland in 1542. He discovered and apparently sailed some distance up the Penobscot River, encountering a fur rich American Indian city named Norumbega - somewhere near modern-day Bangor, Maine. Andre Thevet, writing in 1550, recorded encountering a French trading fort at the site. A few years later in 1562, an English slave ship sank in the Gulf of Mexico. David Ingram, one of the survivors, claimed to have trekked overland from the Gulf Coast to Nova Scotia where he was rescued by a passing French ship. Possibly inspired by Mexican legends of El Dorado, Cibola, and other mythic cities, Ingram returned to Europe to regale his drinking companions with boasts of a fabulous city rich in pearls and built upon pillars of crystal, silver, and gold. The idea caught on in the European popular imagination and expeditions were sent to search for the city - including that of Samuel de Champlain.

This map was engraved for the 1561 first Ruscelli edition of Claudius Ptolemy'sLa Geografia di Claudio Tolomeo. The maps of this edition were engraved two-to-a-plate, and consequently the platemark runs off the edge of the sheet at top. Later editions saw the plates having been cut, exhibiting a platemark all the way around. Also, the typesetting of the Italian verso text of each edition of this map changes. The 1561 issue, as here, has the page number 'XXXII' and the catch letters 'Ii.' The 1574's verso page number is '31' in Arabic numerals with the catch letters 'Hh.' There exist Latin-text editions of 1562 and 1564 as well. The plate of the 1599 issue is reworked and includes a ship. Its verso is page 129, with the catch letters 'Fff.' We see seven examples of this separate map catalogued as 1561 issues in OCLC.