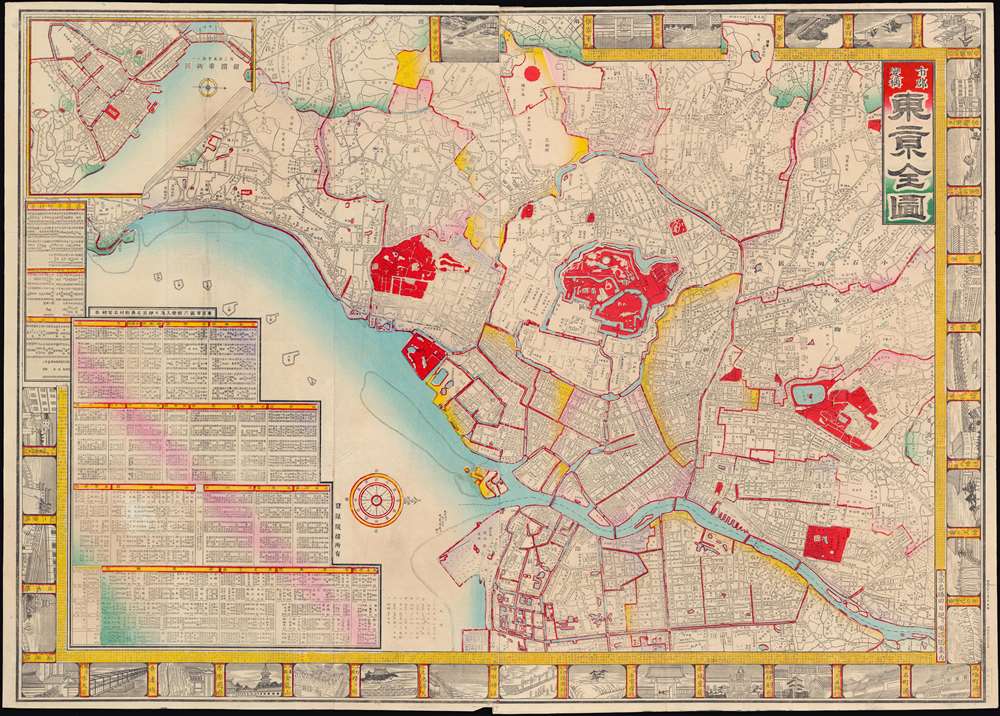 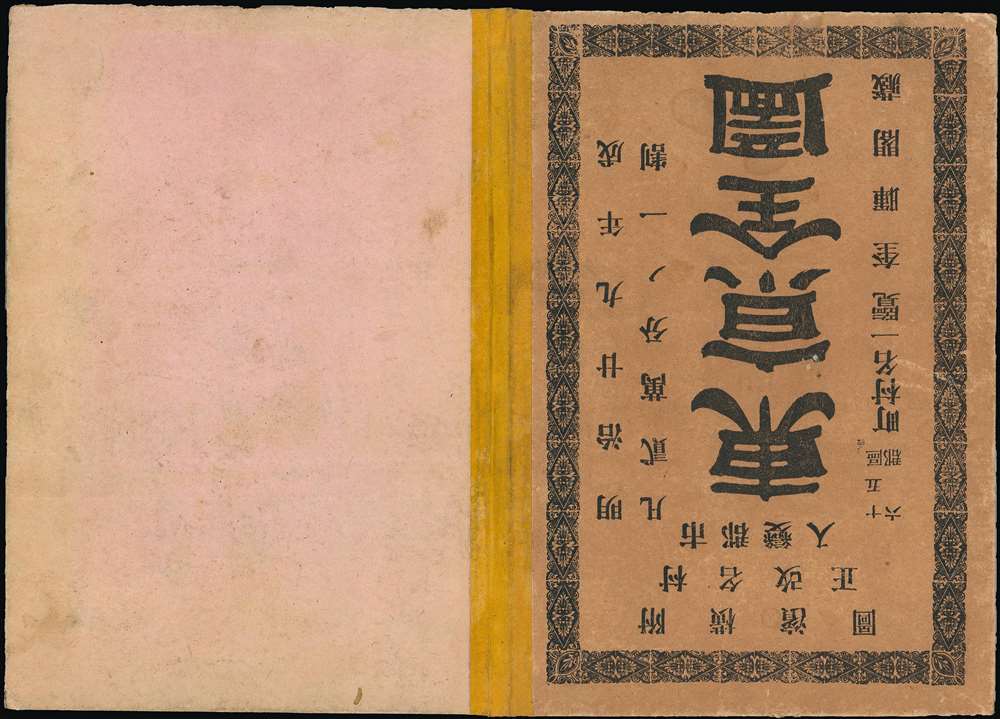 Tokyo transforming into a modern metropolis.
$1,200.00

This is a rare 1895 Sagano Hikotarō map of Tokyo at the height of the Meiji Era. It was produced soon after a bewildering series of administrative reforms and was designed as a guide for the perplexed, showing Tokyo neighborhoods under the new system. The map and the changes it represents are a snapshot of Tokyo in a period of dramatic transformation.

This map served several functions, as a guide to scenic and culturally important sites as well as a handbook for the recent administrative changes. It is oriented towards west, with north at right. The compass towards bottom-left combines the four cardinal directions with the traditional East Asian system of direction, using the Earthly Branches (地支) and Heavenly Stems (天干) to denote degrees in intervals of 15 or 30 (as here) degrees. The drawings along the margins are of important sites and the text above the images offer brief descriptions of each. Many of these are new government offices and other modern architecture, while others are of shrines and scenic views, highlighting the combination of traditional culture and new influences that defined Meiji Tokyo.

The map is very detailed in noting the newly-reorganized neighborhoods (町), using yellow, green, or pink shading to clarify the borders of wards (區) and counties (郡), and shading in red the property of the Imperial House of Japan (including Ueno Park and the Sensō-ji Temple in Asakusa at right, as well as the Hama Palace, now the Hamarikyū Gardens, and Shiba Park at left).

Tokyo and a number of other Japanese cities went through a dizzying period of regular administrative reform under Meiji, due to both the pace of their growth as well as changing bureaucratic practices and conceptions of governance. In an 1888 - 1889 reform establishing municipalities, the central government tried to more directly administer Tokyo, Osaka, and Kyoto (this was unpopular and abolished a decade later), while also eliminating the lowest level of administration, the neighborhood. These changes required frequent updating of maps with the latest administrative divisions and place names (see 'Publication History and Census' below). The boxes at bottom-left list the arrangement of neighborhoods under their new administrative divisions, in 15 wards (區) and 6 counties (郡). Boxes along the left margin list administrative divisions of Yokohama and Kuraki County (久良岐郡), Kanagawa, as well as areas where foreigners resided. An inset map of Yokohama (1 : 35000) appears at top-left.

With the Meiji Restoration in 1868, the Tokugawa were displaced from Edo and the Emperor Meiji moved the imperial capital from Kyoto to Edo (renamed Tokyo, 'eastern capital'). The Meiji Era was a period of tremendous change in Japan, particularly in cities, and in Tokyo more than any other. New ideas, technologies, and fashions from abroad were sought and adopted with incredible rapidity, and in the process were localized to suit Japanese tastes. Building on the foundations of Tokugawa Edo, Tokyo expanded quickly and, in the process, intermingled traditional architecture with styles reminiscent of Victorian London.

This map was published on December 1, 1895 (Meiji 28) by Sagano Hikotarō (嵯峨野彦太郎) as a second edition to Sagano's earlier 1891 map by the same title. He would also publish an 1898 edition of this map. Sagano had earlier published a map in 1888 and 1889 editions titled 'Corrected Map of Meiji Tokyo' (明治改正東京全圖) that may have been a basis for his later 'Complete Map of Tokyo with Municipal Name Changes.' This edition is held by the National Diet Library, International Research Center for Japanese Studies (Nichibunken), Columbia University, and the University of California Berkeley.

Sagano Hikotarō (嵯峨野彦太郎; fl. c. 1886 - 1928) was a dynamic cartographer of the Meiji and Taisho eras who made over one hundred maps in his career, mostly dealing with different cities and regions of Japan, especially Tokyo and Hokkaido, but he also made at least two maps of China. Learn More...

Very good. Minimal wear along fold lines. Minor reinstated loss in compass and where was once attached to binder. Verso reinforcement here and there.