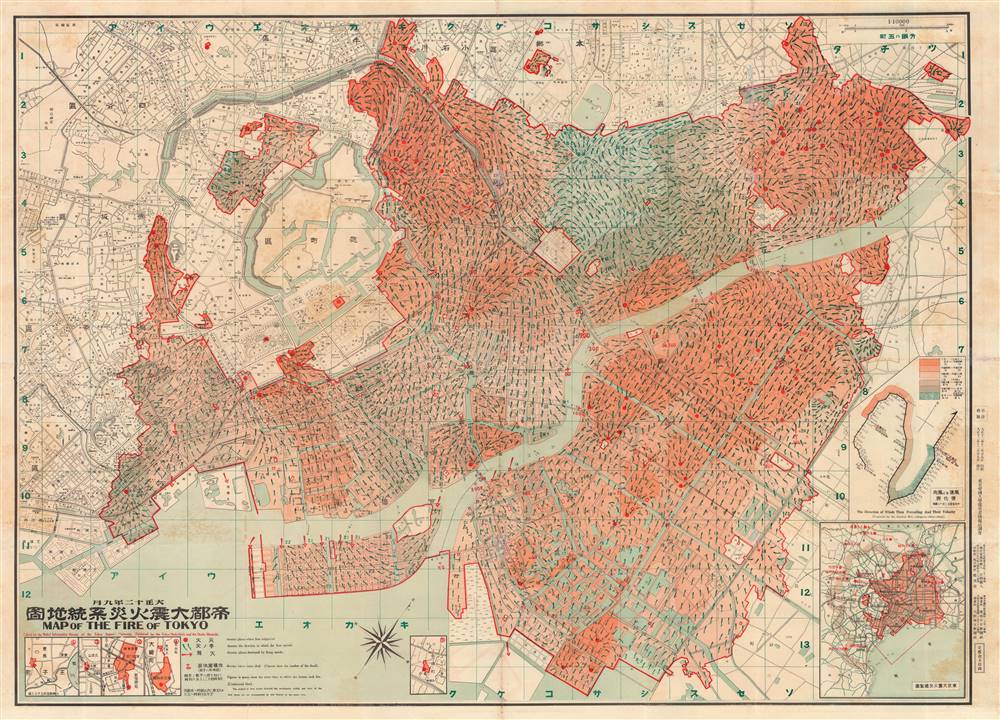 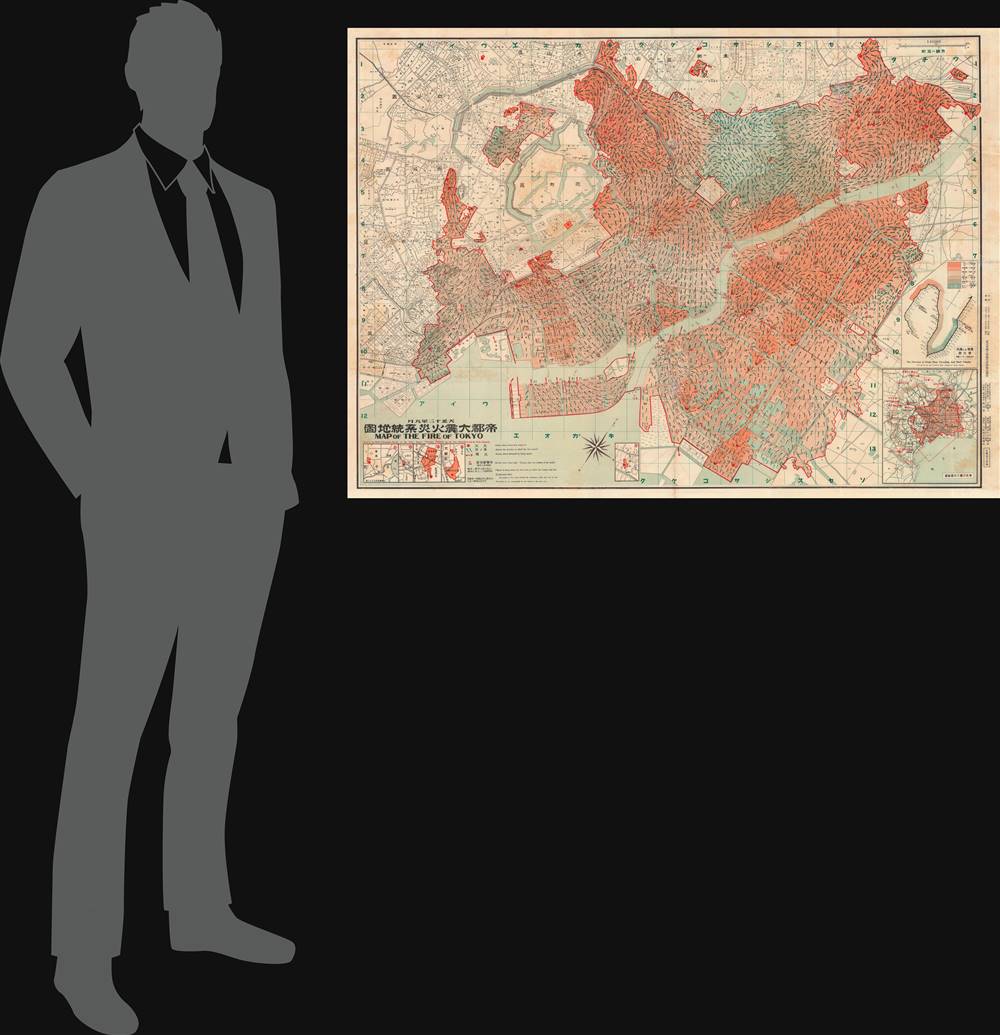 How a wood and paper city burns.

An astounding infographic masterpiece detailing the ignition and development of the Great Fire of Tokyo following the 1923 Great Kanto Earthquake. This is a partially bilingual 1923 map of Great Tokyo Fire was issued by the Bureau of Tokyo Imperial University just four months after the disaster. It focuses ignition points and on the strong winds that coincided with the earthquake, which caused fire to spread rapidly and eventually burn down much of the city - which was constructed of tightly packed wooden buildings.

This map is notable for its close attention to and documentation of the direction and speed of winds blowing when the earthquake hit close to noon on September 1, 1923. These winds were a critical factor in turning an already serious event into one of the worst disasters in Japan's long history of natural disasters. The crosses accompanied by numbers show the number of people who died in each area. The firestorms hit the industrial areas across the Sumida River from the historic center of Edo/Tokyo especially hard, including the shocking death of 34,500 people at the Rikugun Honjo Hifukusho (at right-center), a former army clothing depot where many locals sought refuge. As they were surrounded by grass and trees instead of wood structures, the Imperial Palace (center, towards top-left), other imperial lands, public parks, temples, and shrines generally escaped the blaze with minimal damage.

Insets show a diagram of the wind direction and velocity on the day of the earthquake along with a map of greater Tokyo with numbers corresponding to nearby towns, themselves shown in small insets near the legend at bottom-left. A grid overlays the map with numbers for horizontal rows and kana for vertical columns.

Following the earthquake, a false rumor targeting ethnic Koreans spread throughout Japan. As a recently colonized people, Koreans already faced discrimination in Japan, and tensions were heightened by the recent blossoming of the Korean independence movement. The rumors, which stated that Koreans either were responsible for the earthquake or were taking advantage of the disaster, led to a massacre, today known as the Kanto Massacre. Between 6,000 and 10,000 ethnic Koreans died, and the Japanese government imposed martial law in order to protect Koreans. Several prominent socialist and anarchist political figures were also murdered by the Imperial Army and local police in the post-earthquake chaos (the Amakasu and Kameido Incidents).

The Great Kanto Earthquake left deep imprints on Japanese culture and history, and in retrospect presaged the turn towards militarist nationalism, racism, and the collapse of democracy in the following two decades. It also is part of a much longer history of natural disasters in Japan, especially earthquakes, tsunamis, and typhoons. Tokyo, Yokohama, and a number of other cities needed to be almost entirely reconstructed at considerable cost. The earthquake set back the national economy and the government issued emergency 'earthquake bonds' to help businesses survive. When the government proposed to start redeeming these bonds in 1927, it caused a financial panic and many small banks collapsed, causing more economic strain and leaving the large zaibatsu-affiliated banks as the sole survivors. This financial crisis caused Japan to experience the Great Depression earlier than other industrialized economies and discredited the political, financial, and bureaucratic elite, to the benefit of militarists and other illiberal forces.

This map was compiled and edited by the Information Bureau of Tokyo Imperial University (or, more directly translated, the Victims' Information Bureau of Tokyo Imperial University 東京帝國大學罹災者情報局), printed on December 25, 1923 (Taisho 12), and published two days later by Ono Kenjin (小野縣人) of Seibidō (株式會社精美堂). It was sold by the Tokyo Nichi-Nichi Shimbun (東京日日新聞社) and Osaka Mainichi Shimbun (大阪每日新聞社). The map is included in the holdings of the National Diet Library, National Museum of Japanese History, the University of California Berkeley, Cornell University, and Harvard University. It is scarce to the market.

Information Bureau of the Tokyo Imperial University (東京帝國大學罹災者情報局; fl. c. 1923 - 1924), more literally translated as Victims' Information Bureau of Tokyo Imperial University, was a temporary office set up in the wake of the Great Kanto Earthquake and fire that devastated Tokyo and nearby areas in September 1923. The information bureau produced a highly detailed map (帝都大震火災系統地圖 Map of the fire of Tokyo) and index charting the widespread fires and the winds that spread them following the earthquake itself. Learn More...


Ono Kenjin (小野縣人; fl. c. 1923 - 1938) was an employee of the Tokyo Nichi Nichi Shimbun involved in the printing and distribution of materials by the news agency. Ono later moved to Women's World (婦女界) magazine and published books on kanji reform and Western art. Learn More...


Seibidō (株式會社精美堂; fl. c. 1886 - present) is a Tokyo-based printer and publisher. Initially specializing in newspaper illustrations, advertisements, and headline fonts, Seibidō later branched into other areas of publishing and printing. The company was late to switch away from woodblock techniques, not doing so until the postwar period, but then rapidly adopted the latest technology of the 1950s. By the 1970s, the company had stopped publishing their own material but focused instead on platemaking and advertisements, and by the 1990s had embraced digital printing techniques. Learn More...