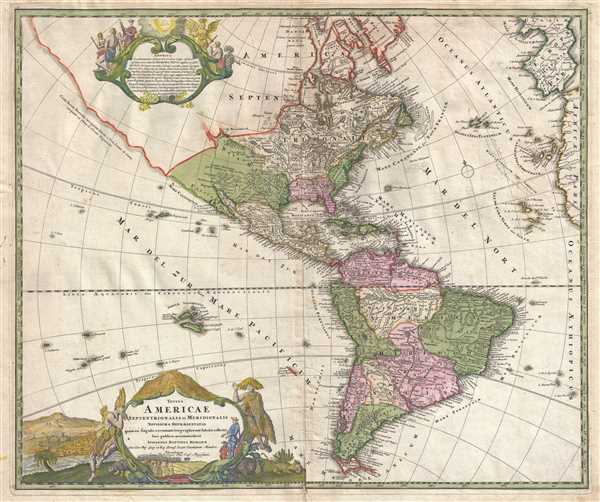 The feature of the North American continent that immediately stands out is the extended western coastline, which extends at an angle in line with the depiction of Baja California. A note along this coastline states that credits its discovery to João da Gama (1540 – 1591). João da Gama was the grandson of Vasco da Gama and an explorer and colonial administrator in the Far East. On one voyage, da Gama set off from Macau with the goal of reaching Mexico. He traveled northeast, rounded the northern coast of Japan, and then crossed the Pacific Ocean at the northernmost latitudes that, up to that point, ever crossed by Europeans. Unfortunately, all of da Gama's notes and logbooks from this revolutionary exploration have been lost, but the, until then, unexplored northern coast of North America became known as João-da-Gama-Land, or simply 'Gamaland'. It was believed the he had discovered a landmass which connected the Americas with Asia,a nd the search for 'Gamaland' then lasted for the better part of the next 150 years.

Moving westward, through what is today the United States, it is important to note that several missionary settlements are labeled, including Carizal (1698) and San Pierre (1699), along with the Colorado River. Santa Fe is also labeled, as well as numerous Native American tribes, such as the Apache, Miami, and the Illinois. It is also worth noting that the Great Lakes are depicted much larger than they are in reality, creating a much different image of continental North America.

Another intriguing feature included on this map is the depiction of the Lacus Aquae Dulces, or Lake Apalachy, in what is today the region of South Carolina and Georgia. With a nearly 200-year history, Lacus Aquae Dulces is one of the more interesting and enduring errors in the early mapping of North America. The curious story of this lake begins with Jacques Le Moyne, part of an ill-fated French Huguenot effort to colonize mainland North America in the mid-16th century. Le Moyne, commissioned to sketch the local inhabitants and map as much of the land as possible, produced an important map of Florida, an impressive achievement. Le Moyne was the first to depict the Lacus Aquae Dulces, which he placed in central Florida as the source of the River May, today's St. John's River. Most European cartographers followed Le Moyne's model, until the 1606 Hondius edition of Mercator's Atlas transposed the lake and the river far to the north. While Le Moyne correctly located the mouth of the River May at 30 degrees of latitude, Hondius mapped it between 31 and 32 degrees. This led to an incorrect association of the River May with the Savanna River. Without an accurate picture of the interior, Hondius inaccurately translocated the great freshwater lake to the north, which then influenced most subsequent European cartographers. It took until 1730, when surveyors and frontiersmen exploring the region failed to identify a major lake in the region, that the cartographic corpus began to change.

In South America, the Amazon River system and the Rio de la Plata are depicted in detail. Numerous locations around the continent are labeled, including Cuzco (Peru), Santiago (Chile), Buenos Aires (Argentina), Lake Titicaca, and Tierra del Fuego. Off the Pacific coast of South America lies an island labeled Terra detecta per David Anglum 1680, which is most likely an early depiction of Easter Island, famous for its 887 extant monumental statues, called moai. Also, farther to the east, lie the Solomon Islands. This is an oversize depiction of the Solomons, particularly Guadalcanal and Isabella.

Of all of these depictions, the inclusion of Lake Xarayes is the most important. The Laguna de Xarayes as the source of the Paraguay River. The Xarayes, a corruption of 'Xaraies' meaning 'Masters of the River,' were an indigenous people occupying what are today parts of Brazil's Matte Grosso and the Pantanal. When Spanish and Portuguese explorers first navigated up the Paraguay River, as always in search of El Dorado, they encountered the vast Pantanal flood plain at the height of its annual inundation. Understandably misinterpreting the flood plain as a gigantic inland sea, they named it after the local inhabitants, the Xaraies. The Laguna de los Xarayes almost immediately began to appear on early maps of the region and, at the same time, almost immediately took on a legendary aspect. Later missionaries and chroniclers, particularly Díaz de Guzman, imagined an island in this lake and curiously identified it as an 'Island of Paradise,'

Other areas of note include Azores Islands, Canary Islands, and Cape Verde Islands, which are all depicted off the coast of Africa. A large and intricate title cartouche is located at the corner, depicting an encounter between Europeans and native peoples. Two different depictions of natives flank the cartouche, along with several animals. A colonial village, complete with windmills, is situated to the left of the cartouche.

This map was published by Johann Baptiste Homann in 1720.