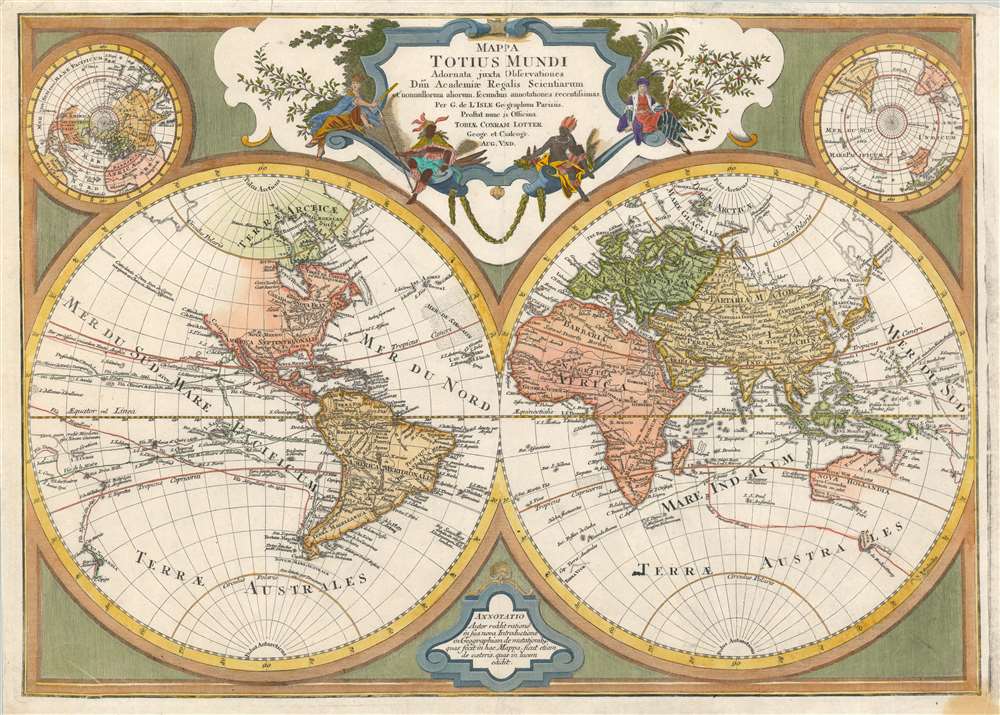 This is a stunning double hemisphere map of the world prepared by Guillaume De L'Isle and published by Tobias Conrad Lotter in 1775. The map consists of two central hemispheres, eastern and western, surrounded by smaller polar projections. Cartographically this map is altogether fascinating and exemplifies De L'Isle's careful scientific style of cartography.

On the Map: North America

Starting in North America we find a number of cartographic advances attributable to De L'Isle. California has been reattached to the mainland of North America following the discoveries of the Jesuit priest Eusebio Kino (1645 - 1711). The northwestern part of North America, still largely unexplored, has been left blank, although the lands supposedly discovered by Jean de Gama do peak out from the Asian side of the map. In the better-known parts of North America, the Mississippi is clearly mapped with its major tributaries. The Great Lakes are fairly well mapped, following the model established by Coronelli in the late 17th Century. Far to the north, the Hudson Bay and Baffin Bay, along with Greenland, form a closed series of seas with minimal suggestion of a Northwest Passage. De L'Isle offers only one possible route westward, an opening in the northwestern part of the Hudson Bay, which is labeled 'Ne Ultra' or 'Nothing More.' Delisle's clear rejection of a Northwest Passage to the Pacific is a bold move for the period. This decision set him in direct opposition to the colonial powers, particularly England and France, who were actively searching for just such a route. The important cities of New York, Quebec, Montreal, Charleston, St. Augustine, Santa Fe, and Boston are identified.

One of the most interesting features of the map is the depiction of 'Frislandia' between Iceland and Greenland. Frislandia, not to be confused with Frisland, on the European mainland, is a 'Ghost Island' that supposedly appeared and disappeared on the horizon. Most maps issued by 1750 or so abandoned this notion, but as the legend and indeed this map attest, the island does have a habit of reappearing.

On the Map: South America

South America is typically well mapped along its coast which is in sharp contrast to its vague and speculative interior. Nonetheless, Delisle does make a number of advances over earlier maps. He does away with Raligh's Lake Parima and El Dorado, commonly rendered in Guyana, while at the same time advancing a more significant Lac de Xarayes. Delisle's large and prominent Lac de Xarayes is rendered as the northern terminus of the Paraguay River. The Xarayes, a corruption of 'Xaraies' meaning 'Masters of the River,' were an indigenous people occupying what are today parts of Brazil's Matte Grosso and the Pantanal. When Spanish and Portuguese explorers first navigated the Paraguay River, as always in search of El Dorado, they encountered the vast Pantanal flood plain at the height of its annual inundation. Understandably misinterpreting the flood plain as a gigantic inland sea, they named it after the local inhabitants, the Xaraies. The Laguna de los Xarayes, accessible only through the Gate of Kings, almost immediately began to appear on early maps of the region and, at the same time, took on a legendary aspect. The Lac or Laguna Xarayes was often considered to be a gateway to the Amazon and the Kingdom of El Dorado.

On the Map: South Pacfic and Australia

Moving across the map to the Eastern Hemisphere, we are immediately struck by De L'Isle 's innovative and fascinating rendering of the discoveries in the South Pacific, including Australia (Nouvelle Hollande), New Zealand, New Guinea, and the Solomon Islands. Earlier editions of this map featured a large hypothetical polar landmass called Terre Australis. Terre Australis was a massive continent conjectured to occupy much of the Southern Hemisphere. It was commonly believed that Terre Australis must exist to counterbalance the great weight of the Asian continent in the Northern Hemisphere just as the Americas counterbalanced Europe, Africa and Asia. De L'Isle has here removed the polar Terre Australis and instead joins the largely unexplored Australia (Nouvelle Holland) with New Guinea.

On the Map: Asia

Asia too exhibits a number of interesting advances over previous mappings. Korea is firmly peninsular and is separated by Japan by the Mer Orientale. Curiously Japan, via Hokkaido (Terra Yesdo) is attached to the Asian mainland. Just to the northeast of Japan, separated from the mainland by the Detroit d'Uries, we find Terre de La Compagnie and, extending to the opposite side of the map, Terre de Gama. Often mapped together, these lands, Gama and Terre de la Compagnie, were islands supposedly discovered in the 17th century by a mysterious figure known as Jean de Gama. Various subsequent navigators claim to have seen these lands, but it was left to Vitus Bering to finally debunk the myth. In 1729, Bering he spent three days in the region looking for Juan de Gama's island but never found it. Although it is likely that Gama and Compagnie may be little more than a mis-mappings of Hokkaido or the Japanese Kuriles, these curious islands remained on maps for about 50 years following Bering's voyages until the explorations of Cook confirmed the Bering findings.

On the Map: Africa

Africa, like South America, is well mapped coastally but exhibits a conjectural and tentative interior cartography. Nonetheless, true to form, De L'Isle does make a number of advances. Most significantly, he does away with the traditional Ptolemaic two-lake theory regarding the source of the White Nile and instead sends the White Nile eastward toward the Niger. The idea that the White Nile has a Sub-Saharan source to the west was a popular interpretation of early texts on the region through rarely appears on maps - this being the exception.

Throughout, De L'Isle painstakingly renders the routes of various explorers including, Magellan, Tasman, Pslsart, Dampier, Gaetan, Dudley, L'Ovilier, and many others. He also notes the curious and often speculative lands many of these explorers discovered, including Halley's glaciers, the Isle de Saxembourg of Linderman Holl, David Anglois' discovery in the south pacific (Easter Island?), the Island of Vaginas (a proto Hawaii?), and many others. The Sargasso Sea, the Grand Banks, and the glaciers of the Antarctic are also noted.

On the Map: Elsewhere

This map was drawn and published by Conrad Lotter in Augsburg, Germany, based upon the cartography of Guillaume De L'Isle. Although undated, this map is commonly dated to 1775. It was issued both separately and in various Lotter atlases. Today it appears on the market from time to time.