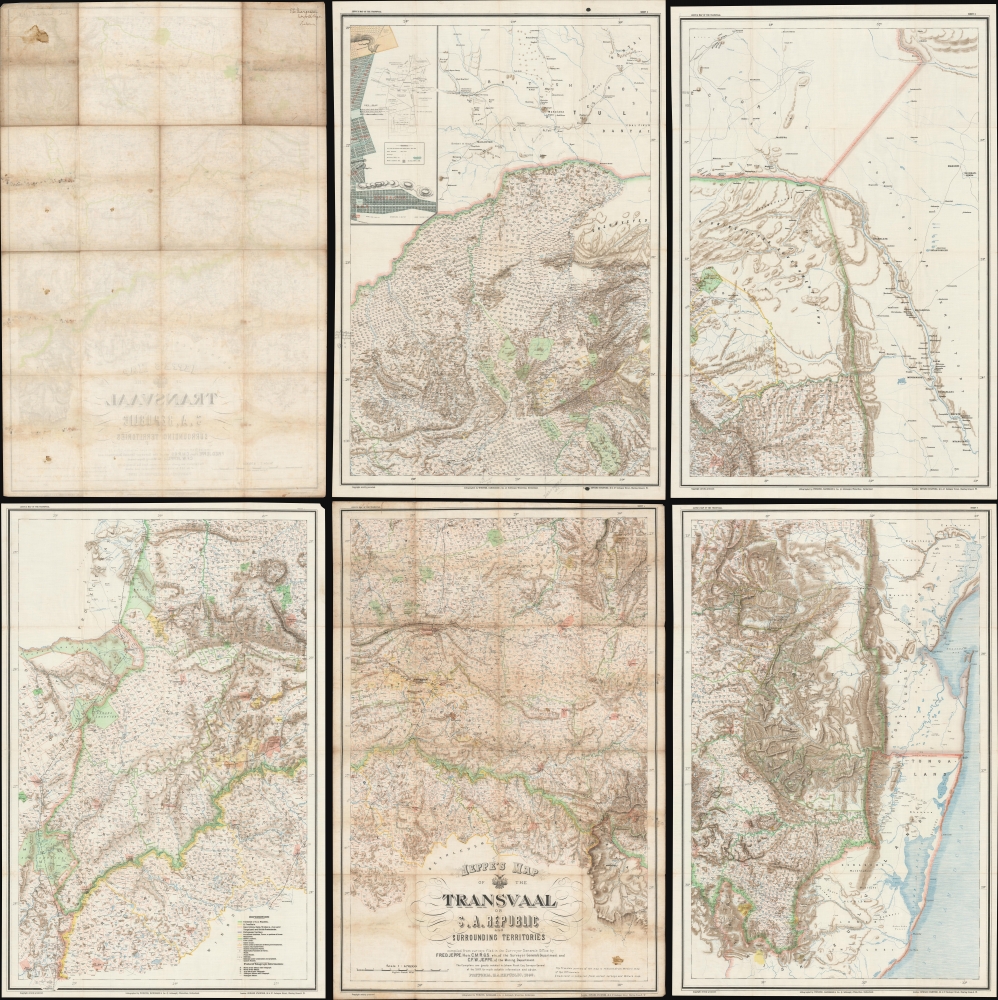 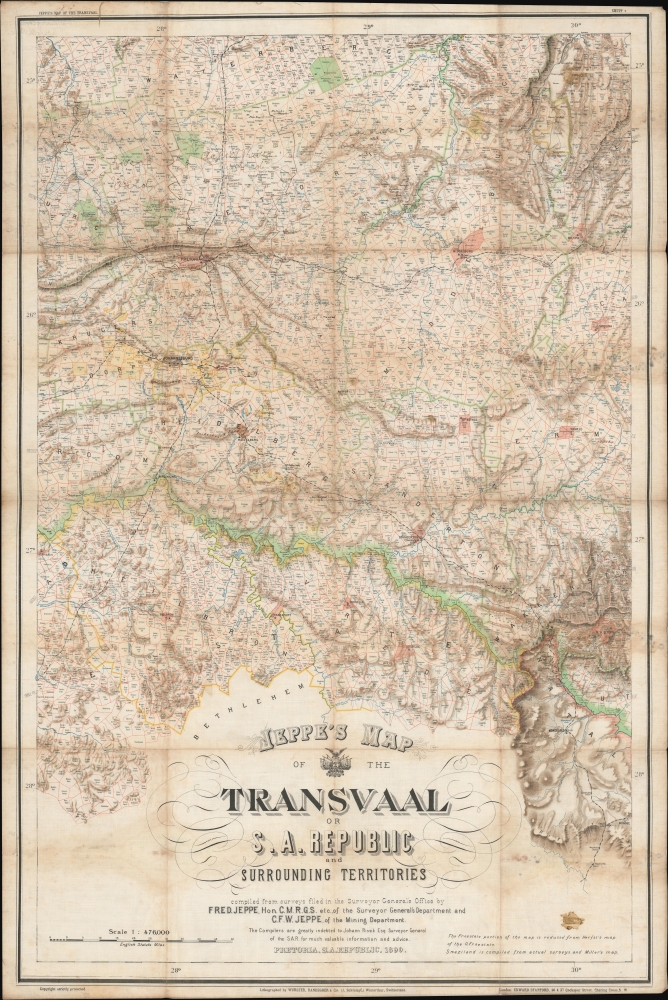 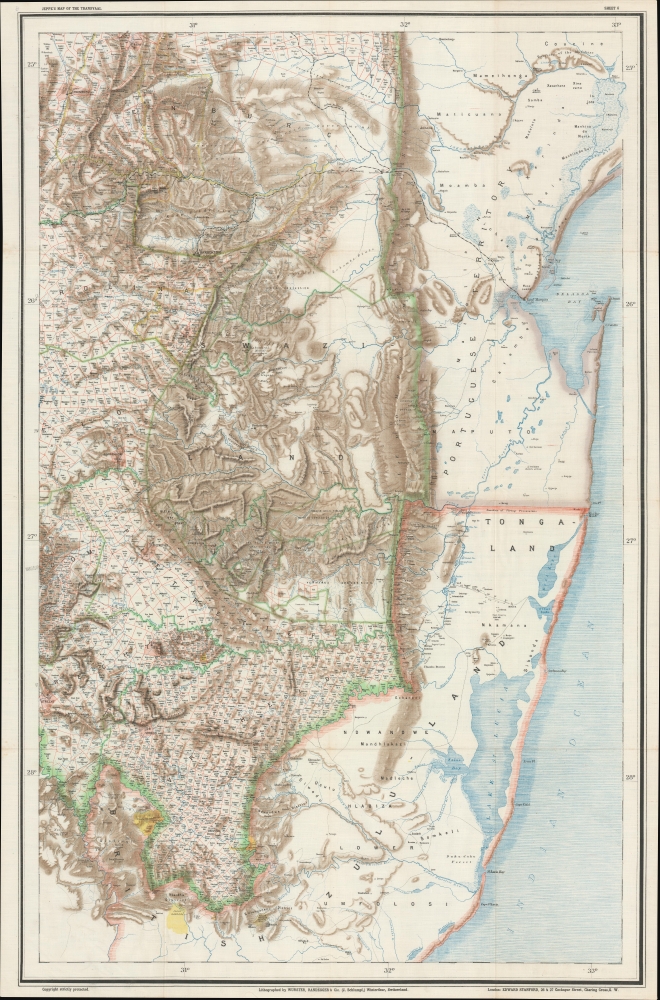 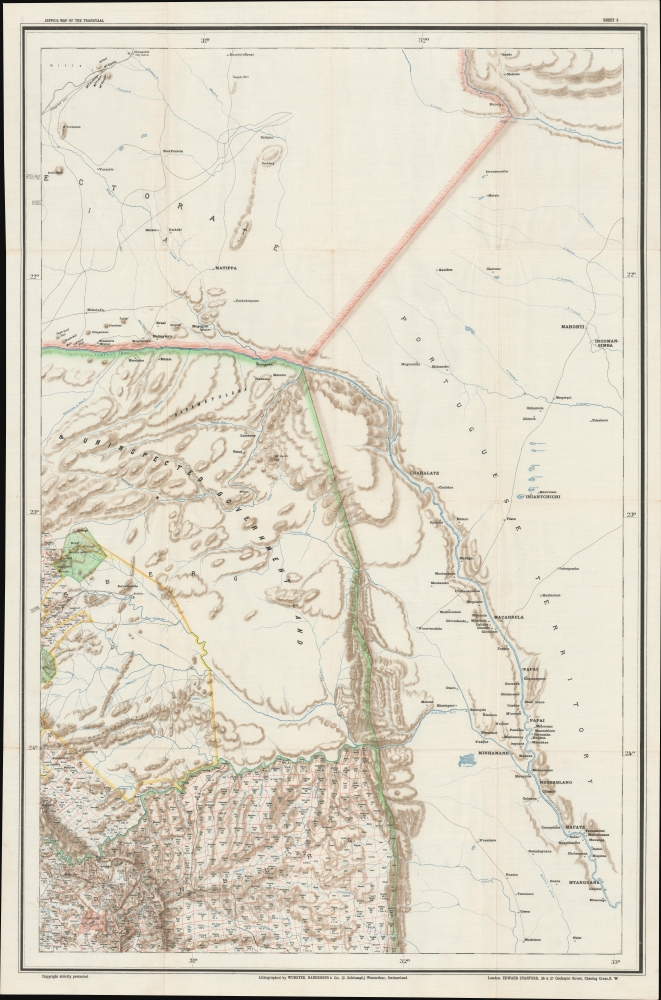 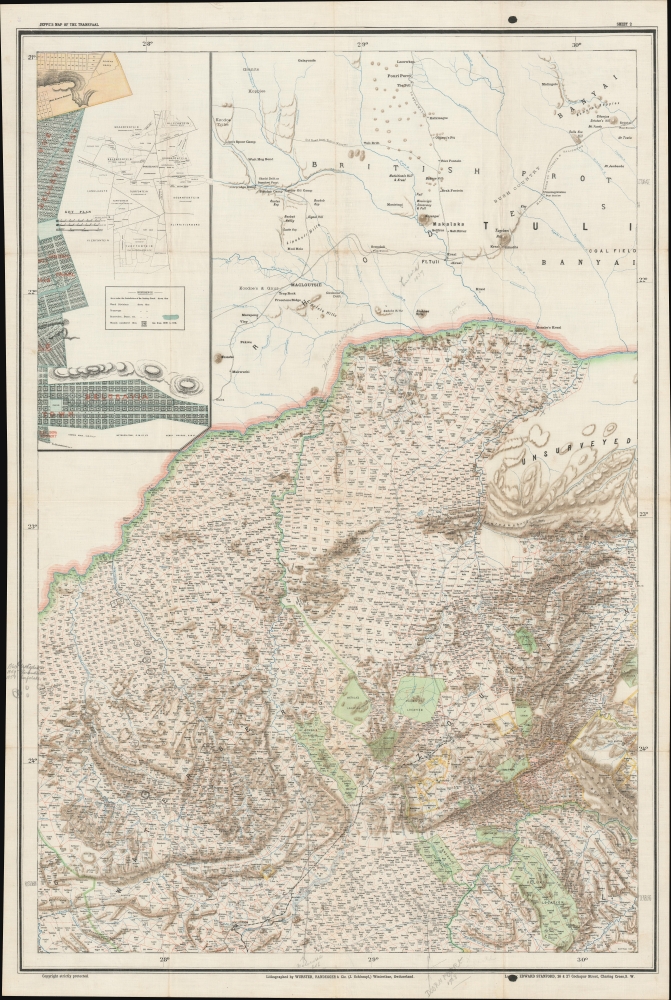 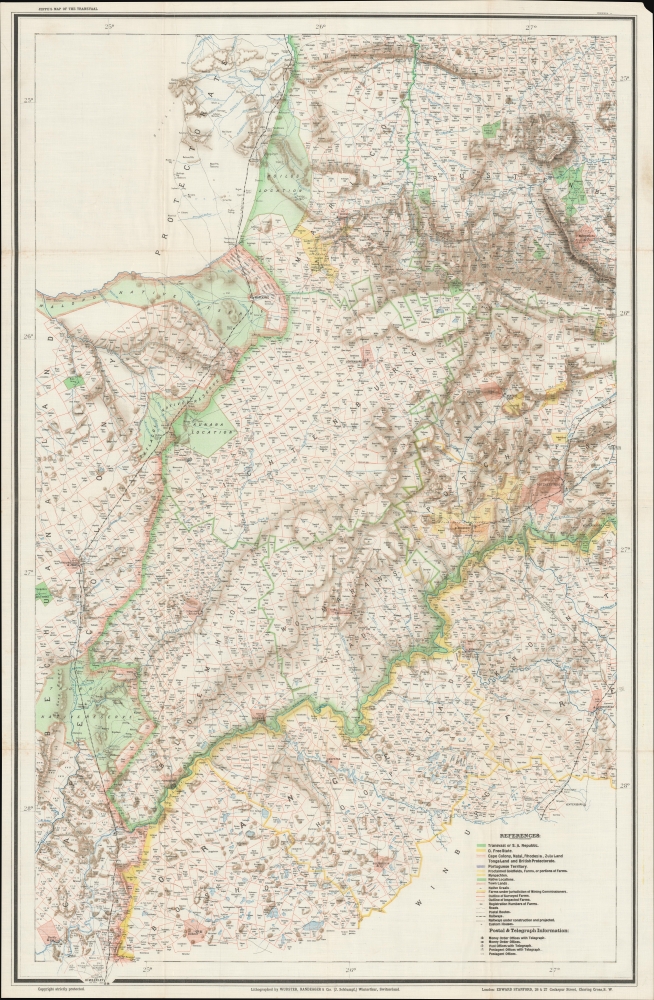 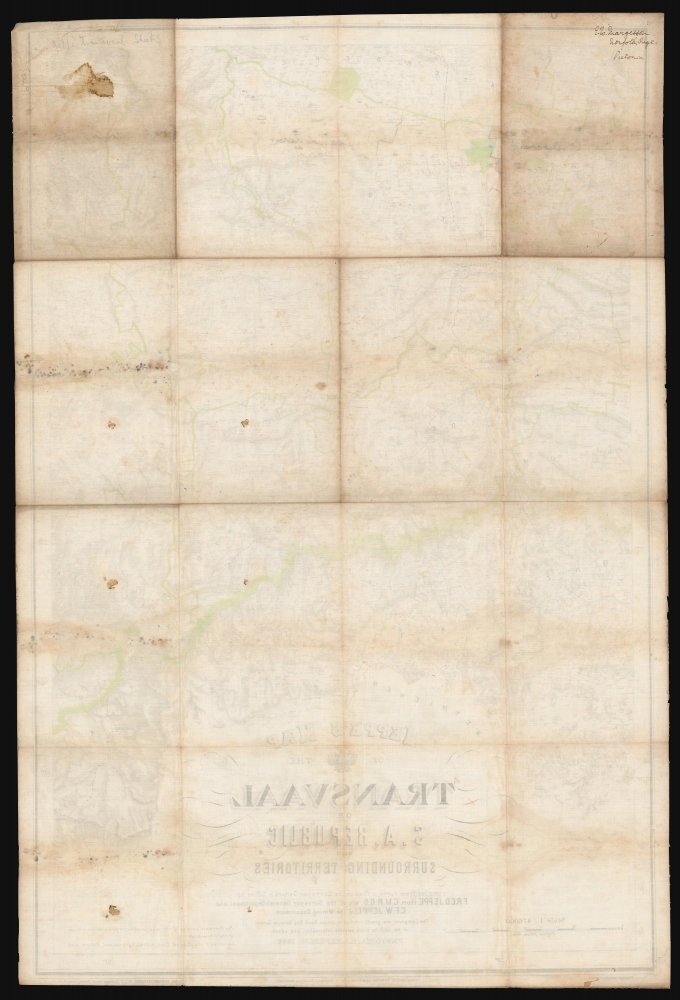 This is a rare 1899 Friedrich Heinrich Jeppe map of the South African Republic or Republic of the Transvaal issued shortly before the outbreak of the Second Boer War (1899 - 1902) with interesting provenance to Capt. E. W. Margesson, a British field officer. The map consists of 5 of the 6 sheets of the original map - unfortunately the northeast sheet, containing insets of Johannesburg and Pretoria, has been lost, but the overall rarity of the map balances this out.

The map covers the Transvaal, at the time the South African Republic (ZAR) in what is today northeast South Africa. It represents the finest reconnaissance of the ZAR available to both sides of the Anglo-Boer War. The present example was smuggled into South Africa and issued to then Captain E. W. Margesson in 1899, when the Norfolk Regiment arrived.

The map is signed on the verso by E. W. Margesson. Evelyn William Margesson (May 16, 1865 - March 9, 1944) was a British officer active with the Norfolk Regiment during the Second Boer War. He enlisted with the Norfolk regiment in 1892 and was sent to India with the Chitral Expedition (1895), then participated in the Tirah Campaign (1897 - 1898), where he was severely wounded in the Bara Valley. At the 1899 outbreak of the Second Boer War he was sent to South Africa. He served in operations in both the Transvaal and the Orange Free State including engagements at Paardeberg, Poplar Grove, Saree Siding, Vet River, and Zand River. He was in the Transvaal in May and June of 1900 and saw action near Johannesburg and Pretoria, and is mentioned in dispatches on September 10, 1901, when the Norfolk Regiment operated in the Pretoria district, although they later garrisoned Rustenburg. After the war, he was most likely assigned to the resettlement of surrendered or amnestied burghers - which make some of the manuscript annotations on this map pertinent. He later served in World War I (1914 - 1818) before retiring from military life.

Jeppe began compiling information for this map as early as 1892. The work was complex and arduous, as no real survey of most of the territory was completed, in the words of scholar Lindsay Frederick Braun,

Because the lands of the Republic - an area barely smaller than the British Isles themselves - had no general network of triangulation, the map depended on a hodgepodge of sketch inspections, block surveys, and a few astronomically fixed positions, which made it as much art as science. Nonetheless, it was superior to anything else available, and the British duly seized the first shipment of some 5,000 map sheets in Cape Town in January 1900. (Royal Commission, 1903: 452).

Smuggled into the Transvaal

The British were aware of this map as early as 1898, when Jeppe, a pro-British agent as well as a Transvaal official, sent copies of the bottom three sheets to London via Cape Town. The Boer authorities had previously made some attempts to delay the map's shipment to England to late 1899, but this apparently backfired in the face of Jeppe's ardent commitment to Great Britain. Knowing access to multiple copies of the printed map was an essential war reconnaissance, the Cape Town-based intelligence officer Lt. Col. Henderson clandestinely acquired several thousand examples from the Swiss printer, Jakob Schlumpf. These were officially 'seized' by British Officials as contraband - likely to prevent a diplomatic incident before the outbreak of war.

Also known as the Boer War, Anglo-Boer War, or South African War, the Second Boer War (October 11, 1899 - May 31, 1902) was a conflict fought between the British Empire and the independent Boer states Republic of Transvaal / South African Republic / ZAR and the Orange Free State. Although tensions in southern Africa between British and Boer had been fermenting for nearly a century, the Second Boer War was set off by the discovery of the Witwatersrand Gold Reef near modern-day Johannesburg. British and other foreign fortune hinters, uitlanders as they were known among the Boer, poured into the region, threatening Boer sovereignty. In the beginning, the well-armed and trained Boers struck first, successfully winning several important battles and seizing several cities. Initial success led to overconfidence. Prompted by Cecil Rhodes and other powerful mining magnates, British armies flooded into South Africa, bringing more than 400,000 men from far flung colonies. The Boers were completely overwhelmed. The British seized control of both the Orange Free State and the Transvaal. Although fighting continued in the form of guerilla attacks, by 1902, the war was effectively over and the region fully under British control.

This map has a complicated publication history. Jeppe originally intended the work to consist of only the lower three sheets, but new survey information became available in 1898 and he set immediately to expanding it. As noted previously, drafts of the lower three sheets were sent clandestinely to England in early 1898, despite Boer efforts to the contrary. Just before the work was completed, Jeppe contracted liver disease (hepatitis?) and became increasingly weak. When it became apparent he would not be able to complete the work, he wrote to his friend Friedrich Bernard Rissik (1857 - 1925), whose name appears on the map, requesting that all assistance be provided to Jeppe's son, Carlos Friedrich Wilhelm (Charles) Jeppe (1870 - 1900), in the completion of the work. Charles Jeppe finished the map in 1899 and sent it to Winterthur, Switzerland, where it was it was engraved and printed by Jakob Schlumpf using his signature waxed silk chromolithography technique. Uncommon on the market.

Friedrich Heinrich Jeppe (July 25, 1834 - July 17, 1898) was a German publisher, spy, and mapmaker active in South Africa during the second half of the 19th century. Jeppe was born in Rostock, Germany and relocated to South Africa with his two brothers in 1861. Although initial merchants, F. H. Jeppe took a position as postmaster in Potchefstrom, and later, became Postmaster-General of the Transvaal Republic, a position he maintained until 1875 - when he lost his appointment to political maneuvering. Jeppe published numerous important large-format maps of the Transvaal and South Africa from about 1867 onwards. He also published the Transvaal Almanac and Directory from about 1877 onwards. Also in that year, 1877, he was commissioned as Government Translator and Controller of Statistics in the office of the Colonial Secretary. Eventually he obtained the position of Chief Draughtsman in the Department of the Surveyor-General. There is considerable evidence to suggest that Jeppe was a British agent that actively channelled cartographic information to British authorities until the time of his death. Jeppe became ill with liver disease early in 1898 and died in Pretoria on July 17 of 1898 (interred at the Old Cemetery, Pretoria.) On the eve of his death, he was still actively working on his most ambitious map, and his final missive to friend and government official Johann Rissik, requested assistance to his son, Carlos Friedrich Wilhelm (Charles) Jeppe (1870 - 1900), in publishing the completed map. The massive 6-sheet map was finally published in 1899 - just in time for the Second Boer War (1899 - 1902). Although published posthumously, Jeppe's 1899 Map of the Transvaal or S.A. Republic. The maps was used by both sides during the war and proved one of the finest and most important maps of South Africa ever published. Learn More...


Jakob Schlumpf (August 7, 1857 - May 21, 1916) was a swiss printer based in Winterthur, Zurich, Switzerland. Schlumpf was born in Winterthur in 1857. He mastered lithography in French-speaking Switzerland from 1875 to 1879 before returning to Winterthur to set up his own press, Schnellpresse, in 1879. There he employed and trained his brother Heinrich Schlumpf. In 1890, he joined forces with Johann Randegger (1830 - 1900), who had earlier taken over the firm 'Joh. Wurster und Comp,' originally founded by Johann Ulrich Wurster (1814 - 1880) in 1842. The firm was renamed 'Wurster, Randegger und Cie.,' Schlumpf being the 'Cie.' As the youngest partner, the work of the firm fell increasingly on his shoulders, as did its good name. From 1890, when the elder surviving partner, Randegger, retired it was renamed 'Topographische Anstalt J. Schlumpf'. Under Schlumpf, the firm developed the novel technique of printing chromolithographic color on waxed silk or linen - a service popular with alpine enthusiasts, the military, and other enterprises that required durable filed maps. The publishing house adopted its last name, 'Kartographia Winterthur', in 1906. The firm formally closed its doors in 1924, when it filed for bankruptcy and was acquired by Orell Füssli Publishing. Learn More...