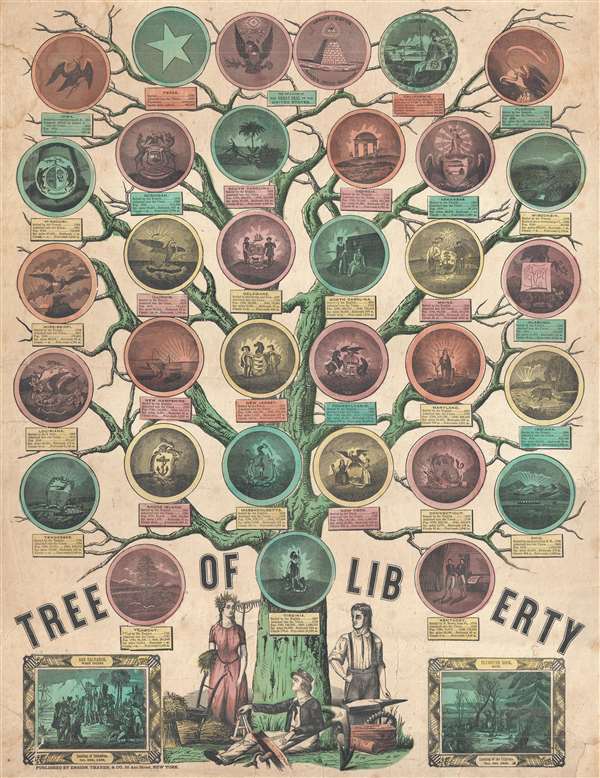 A wonderful bit of broadside American, this is a c. 1849 Edward Hooker Ensign and Horace Thayer illustration of the 'Tree of Liberty.' The tree, which grows from roots surrounded by hard working Americans, consists of medallions for each state along with statistical information regarding that state. At top center, is the obverse and reverse of the Great Seal of the United States of America. On the bottom left there is a historical illustration of the landing of Columbus at San Salvador on October 12, 1492. On the bottom right another illustration details the arrival of the Pilgrims at Plymouth, December 22nd, 1620.

The expression 'Tree of Liberty' harkens to a letter written by Thomas Jefferson to William S. Smith, a diplomatic official in London, on November 13, 1787. The full quote reads,

What signify a few lives lost in a century or two? The tree of liberty must be refreshed from time to time with the blood of patriots and tyrants. It is its natural manure…

The letter concerned Daniel Shays' 1786-1787 rebellion in Massachusetts. While Jefferson did not support the underlying causes of the Shays Rebellion, he did support the rebellion itself as a proper expression of men's natural rights to overthrow an unjust system. The letter is a window into just how fiery Jefferson's own political thinking had become. In modern times, the 'Tree of Liberty' has taken on darker meanings and is often associated with terrorist and political fringe groups. Timothy McVeigh, the Oklahoma City Bomber, wore a tee-shirt emblazoned with a bloody 'Tree of Liberty' in 1995 and William Kostric carried a sign reading 'Time to water the tree of liberty' when he carried a Semi-Automatic handgun to President Obama's Portsmouth, New Hampshire Town Hall Meeting.

The broadside is undated but the latest historical information evident is the May 30, 1848 ratification of the Treaty of Guadeloupe Hidalgo by Mexico – thus formally ceding New Mexico, California, Nevada, Utah, Arizona and Colorado to the United States. We are able to further refund the date to 1849 based upon the imprint, 'Ensign, Thayer, and Co.' which was only used in that year.

This broadside is uncommon with one 2 mentions in the OCLC, one at Princeton and another at the New York Historical Society.