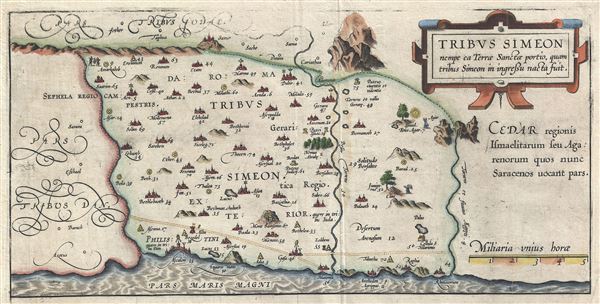 This is a fine example of Christian van Adrichem's rare 1590 map of the lands granted to the Tribe of Simeon at the time of Joshua's division of the Twelve Tribes. Oriented to the East and identifies the lands of the Philistines as well as timber lands rich in Cedar. The Tribe of Simeon occupied the region southwest of Canaan and was bounded by the lands granted to the Tribes of Dan and Judah. Numerous Biblical sites are noted throughout. This map is the tenth of ten maps of the Holy Land prepared by Christian van Adrichem for publication in his Theatrum Terrae Sanctae. Adrichem's maps for the Theatrum were prepared between 1580 and 1585, but were published posthumously by his associate, Gerardis Brunius of Koln, in 1590. The publication went through several later editions and served as a basis for most subsequent maps of the Holy Land well into the 18th century.