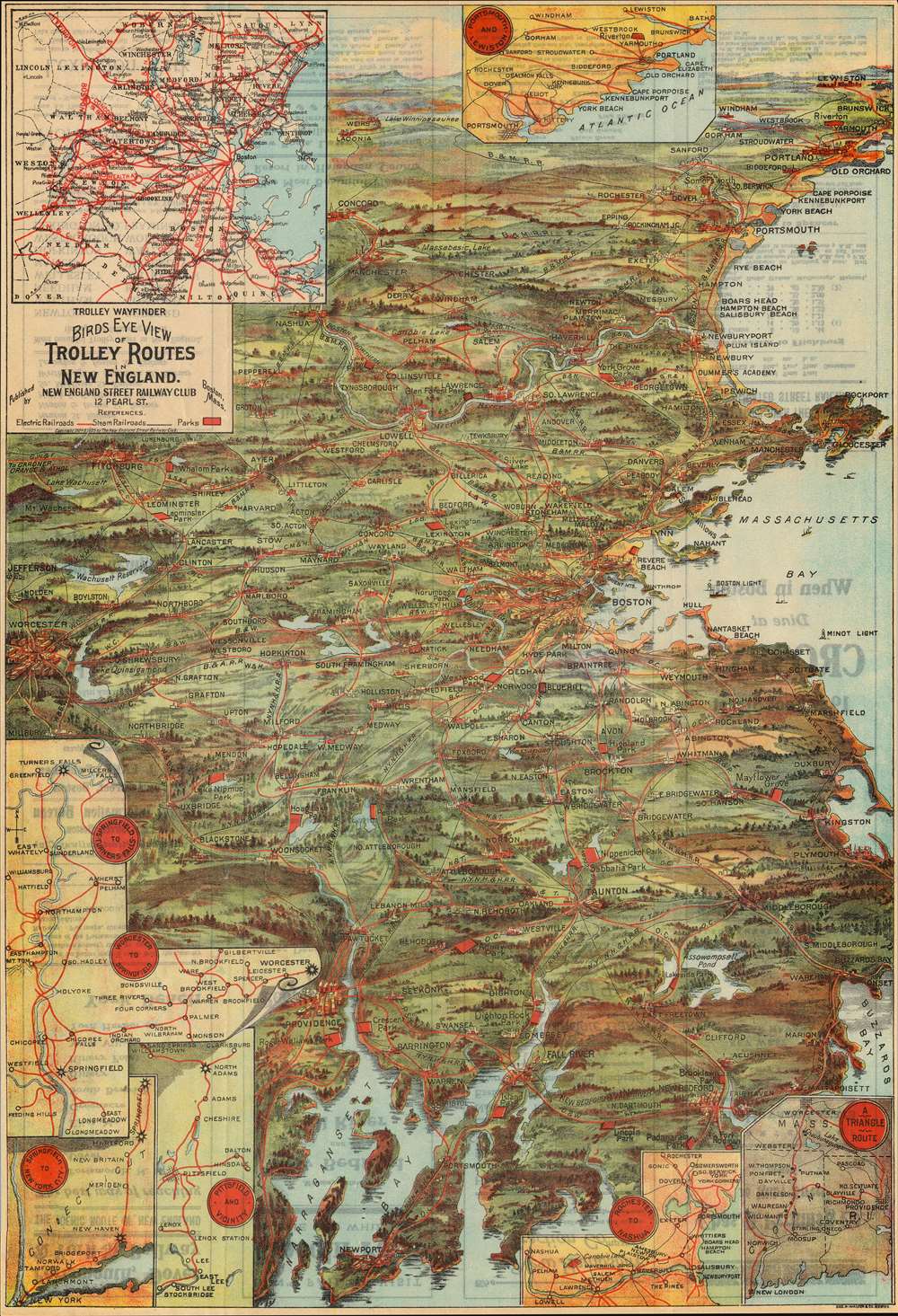 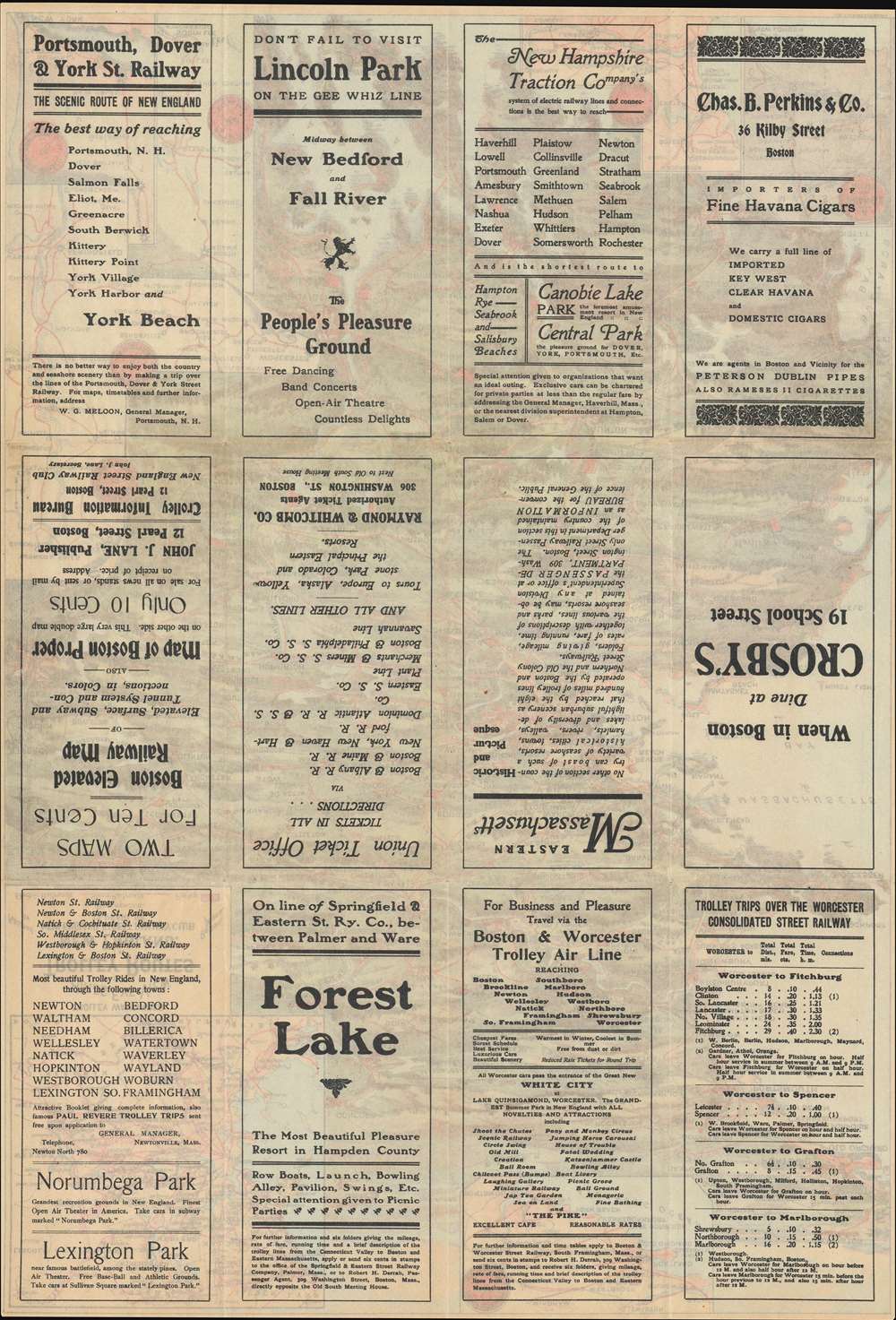 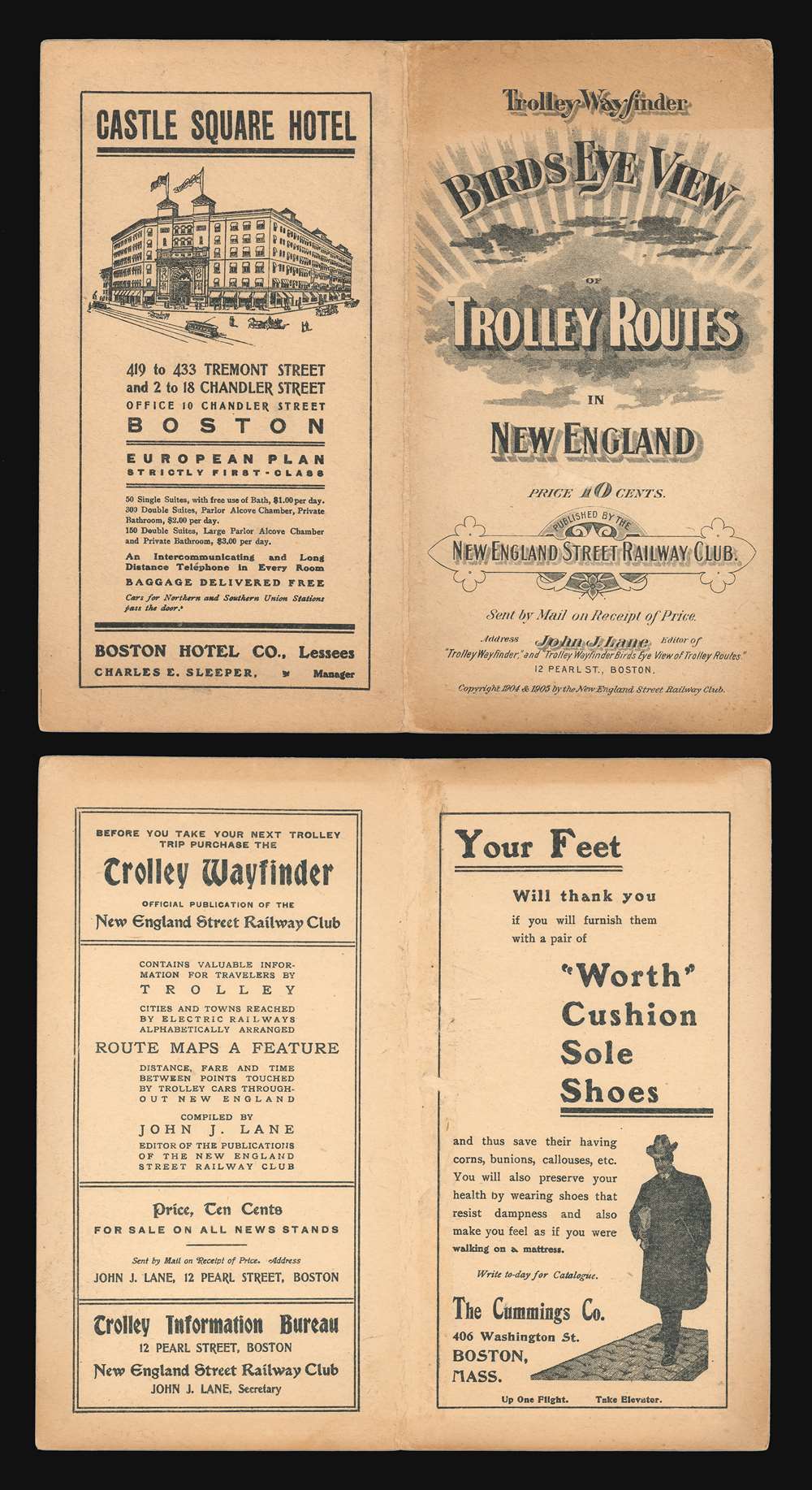 A radiantly rich chromolithograph bird's-eye view style pocket map of New England issued in 1905 by John Jenness Lane and George Walker for the New England Street Railway Club. The view was produced upon Lane's election as secretary of the Club to promote the extensive but ephemeral New England streetcar network. Centered on Boston, New England's streetcar system is revealed extending north as far as Lewistown, Brunswick and Yarmouth, Maine; south to Narragansett Bay, Newport and New Bedford, Massachusetts; and west as far as Worcester. Both electric railroads and steam railroads are noted here, with red lines indicating an electric railroad and a black line marking the route of a steam railroad. Various parks, lighthouses, historic sites, and geographical features are also labeled. Popular routes are highlighted by inset maps, which include: Springfield-Turners Falls, Worcester-Springfield, Springfield-New York City, Pittsfield and Vicinity, Rochester-Nashua, Portsmouth-Lewiston, and a triangle route from Worchester to Providence to New London and back. An inset of the vicinity of Boston is situated in the upper left

This map was created by John Jenness Lane who contracted its production to George H. Walker of behalf of the New England Street Railway Club. The first edition appeared in 1904, with subsequent editions, issued from 1905 to 1909. The first and second edition (1905), as here, are near identical. Subsequent editions were gradually issued with less and less color using cheaper printing techniques. There are perhaps 7 listings of the 1904/1905 edition in the OCLC, but more likely exist uncatalogued.


John Jenness Lane (July 5, 1860 - July 13, 1913) was a New England newspaperman, printer, editor, and publisher active in the late 19th and early 20th century. Lane was born in Candia, New Hampshire. At just 18, in 1878, Lane founded the Candia Banner, a daily servicing Candia, New Hampshire. The small newspaper was remained active until 1882. In 1880, he took over management of the Suncook, New Hampshire local. He worked for a time as an editor in Manchester New Hampshire, eventually establishing the Laconia Advocate. He also worked as a correspondent for the Boston Globe in northern New Hampshire. In 1896 he relocated to Boston to take on an editorial position at the Associated Press. Lane was an active promoter of New England Street Railroads, or Trolleys, and served as secretary of the New England Street Railway Club from 1904, when he leveraged his editorial credentials to publish an exceptional Trolley Wayfinder Map of New England. He joined the masonic order in 1904 and was active in political life, beling elected to the Board of Selectman, the Everett Common Council, and the School Board. Lane's son, Harry, died of illness in 1910, leading to a period of deep depression and physical decline that ended in his death in 1913. Learn More...