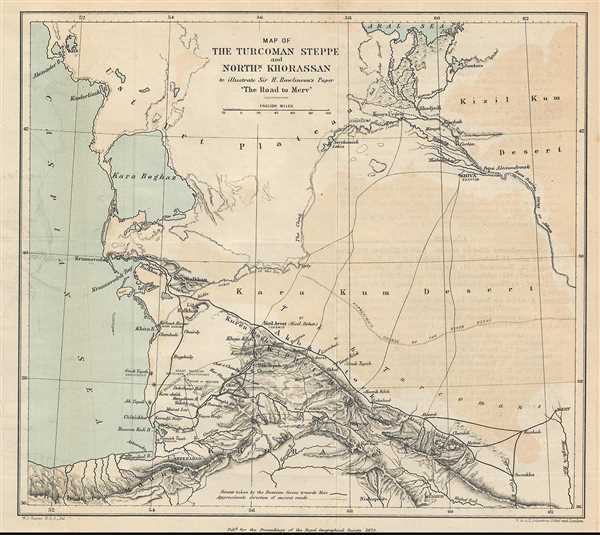 This is a rare 1879 Sir Henry Rawlinson map of Turkmenistan and Iran. The map shows from the eastern Caspian Sea to the western half of Turkmenistan, which the map calls the Turcoman Steppe and from the Aral Sea to the northern reaches of Iran (Khorassan). This map shows the coast of the Caspian Sea in incredible detail, and includes the mountain ranges and both ancient and contemporary routes of rivers. Several towns and cities are labeled as well.

This map was made to accompany a paper given by Major General Henry Rawlinson entitled 'The Road to Merv' to the Royal Geographical Society. In his paper, General Rawlinson discusses both the ancient and contemporary geography of the region, as well as the current status of the Russian invasion of the region. This map shows the route taken by Russian troops, as well as General Rawlinson's proposed routes, since, at the time of the paper, the successful capture of Merv (the modern city of Mary, Turkmenistan) had not yet been achieved.

Rawlinson, H.C., 'The Road to Merv', in Proceedings of the Royal Geographical Society and Monthly Record of Geography Vol.1, No. 3, March 1879.