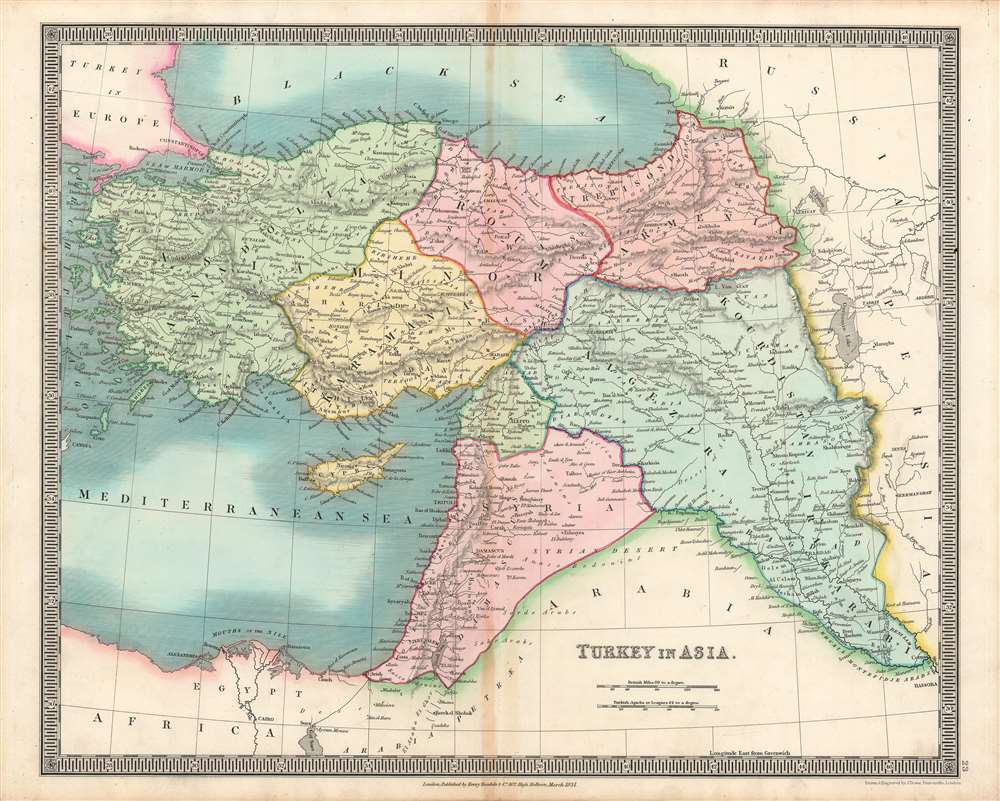 A bright map of a rather dark period in Ottoman history.
$300.00

This is a brilliantly colored 1831 Henry Teesdale / John Dower map of the 'Turkey in Asia,' that is, the Asian portion of the Ottoman Empire. This map was published as the Ottoman Empire faced both external and internal threats, and an acute existential crisis from within at the hands of Muhammed Ali Pasha, which the dynasty only survived thanks to a foreign intervention.

This map illustrates the Ottoman Empire in Asia, which by the time this map was produced was most of what remained of the empire, as the Ottomans had lost much of their territory in southeastern Europe to nationalist independence movements. Declining Ottoman authority, social discontent, and rising nationalist sentiment also caused Istanbul to lose control of Egypt (discussed below) and to retain only a weak grip over much of the Levant. These vulnerabilities would be exploited repeatedly by Britain, France, and Russia, who were only limited by a desire not to see each other gain too strong of a foothold in the Levant.

Throughout the 19th century, the Ottoman Empire was beset not only by external threats (a string of wars against Russia in particular) but also by internal division. National awakenings in the Balkans at the start of the 19th century had forced Istanbul to relinquish control over Serbia and to fight a losing battle to retain Greece. Meanwhile, and not for the first time in Ottoman history, a dynamic administrator and military commander proved to be a double-edged sword. Muhammed Ali Pasha initially came to power in Egypt after being dispatched by the Ottomans to restore their authority there, which had been overturned by Napoleon's invasion in 1798 and a subsequent civil war. He was successful in pacifying Egypt, but then immediately moved to declare himself ruler of the province and instituted a range of modernizing reforms.

Muhammed Ali was a powerful weapon for the Ottomans, conquering Sudan, reconquering Arabia, and nearly reconquering Greece until he was stymied by a combined British, French, and Russian intervention at Navarino in 1827, which sank his entire navy. However, he was also ambitious and beyond the control of Istanbul (which explains Egypt not being included among Ottoman lands here). In exchange for his military campaigns, Muhammed Ali demanded that the Sultan grant him control of Syria. When that demand was rejected, the same year this map was published, Muhammad Ali launched an invasion of Syria, handily defeating Ottoman forces before moving further into Anatolia. The Ottomans were only saved through the intervention of Russia, which blocked the route to Istanbul. Thereafter, Britain and France brokered an agreement that capped Russia's influence in Turkey (their primary concern) while mollifying Muhammed Ali by granting him Syria.

Less than a decade later, the Egyptians and Ottomans waged war again, with Muhammed Ali again winning handily and again being prevented from capturing Istanbul by an intervention of major European powers. However, he was effectively granted de jure autonomy over Egypt, establishing an independent dynasty, in exchange for leaving Ottoman Syria. Unfortunately for Muhammed Ali, his successors were not nearly as capable or wily as he, and the dynasty's power waned vis-à-vis European powers, with Egypt falling under British occupation and then a protectorate in the late 19th - early 20th century.

This map was engraved by John Dower for the 1831 edition of A New General Atlas of the World, published by Henry Teesdale. This appears to be an especially rare presentation of this map, as examples in the David Rumsey Historical Map Collection and other major digital repositories from other editions of the map do not show such vivid and full color. The 1831 edition of this map is only independently cataloged in the holdings of four institutions, while the entire atlas is held by roughly a dozen institutions, though as stated above the present map may be distinct from those examples in coloration.