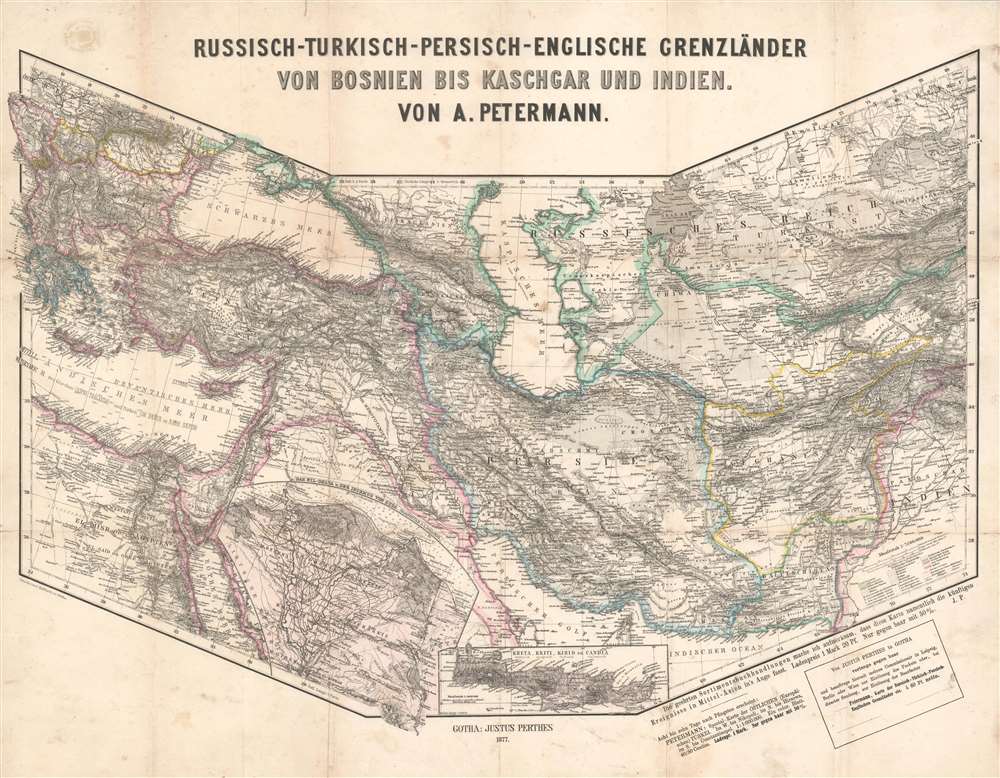 Depicts the entire area of conflict during The Great Game.

This is a scarce and unusual 1877 Augustus Petermann map of the Middle East and Central Asia at the height of The Great Game, a decades-long diplomatic duel between the British and Russian Empires. Detailing the entire theater of war, the map's polyconic projection covers from the Balkans to British India; Crimea to the Persian Gulf and Indian Ocean. The Russian Empire stretches across the top of the map, an ever-expanding threat to countries to the south with deep water ports on the Mediterranean Sea and Indian Ocean. Throughout the 19th century, the Russian drive southward led to several wars with Persia and Turkey, which also embroiled British and French interests, staging Russia as 'the great enemy'.

Verso Content – A Look at the 19th Century Map Market

An address, postage stamp, Gotha postmark, and numerous Cammerstein postmarks on the verso provide some insight into the map's history. The publisher, Perthes, was based in Gotha, so it is likely this map was mailed directly to a client - curiously without even an envelope. Such underscores the low value placed on printed maps, which while having immediate informational value, were considered 'items of the moment' to be used and discarded.

This map was created by Augustus Petermann and published by Justus Perthes in 1877. Nine examples are catalogued in the OCLC and are part of the institutional collections at the University of Oklahoma, the University of London Senate House Library, the British Library, the Bibliothèque national de France, the State Library of Württemburg, and university libraries in Bremen, Hamburg, and Erfurt.