1789 Djurberg Map of Polynesia with indigenous name for Australia (Ulimaroa) 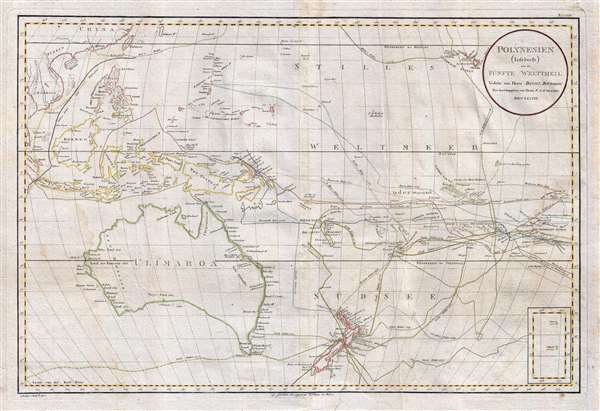 1789 Djurberg Map of Polynesia with indigenous name for Australia (Ulimaroa)

One of the very few maps to use the indigenous terms for Australia and New Zealand: Ulimaora (Australia), Tavai-Poenammoo (New Zealand South Island) and Ealiei-Nomauwe (North Island).
$1,500.00

This important 1789 map of Australia and Polynesia is one of the very few maps to use the indigenous terms for Australia and New Zealand: Ulimaora (Australia), Tavai-Poenammoo (New Zealand South Island) and Ealiei-Nomauwe (North Island). All three of these terms are extracted from accounts of Cook's voyages.

The usage of Ulimaroa to identify Australia can be traced to the Swedish geographer Daniel Djurberg, who introduced it in his Cosmografie Samt Beskrifning om Jorden i Allmänhet (Cosmography and General Description of the Earth). Djurberg writes,

On page 436 of Hawkesworth’s account of Cook’s first voyage, Ulimaroa is mentioned as the biggest island in the world. I should give a reason for this name. This land is called New Holland in a lot of maps, but for what reason I do not know; there is no similarity between Holland in Europe and this land, neither in size nor in the area’s character. You find in the account of the famous English sailor Cook’s journeys that when he was on the northern coast of New Zealand, he asked the inhabitants there if they knew any other country, to which they replied that to the north-west of their home, a quite large land was located, which they called Ulimaroa. I have decided to maintain this name as given to this land by its neighbors; besides it is better than New Holland.

On a secondary level, the map is notable for its detailed accounting of the various exploratory missions to the South Pacific in the 17th and 18th centuries. These include the routes of James Cook , Abel Tasman, Philip Carteret, Alvaro de Mendaña de Neira, Pedro Fernandes de Queirós, Charles Clerke, and Samuel Wallis. Its coverage extends from Taiwan (Formosa) and Hawaii, south as far as New Zealand.

This map was first issued in 1780, in Swedish, by Daniel Djurberg. The present example is the 1789 second issue by Austrian publisher Franz Anton Schraembl.

Daniel Djurberg (June 3, 1744 – October 2, 1834) was a Swedish geographer and cartographer active in the late 18th and early 19th centuries. Djurberg as the grandson of the well-known theologian of the same name. He was born in Gävle, Sweden, and studied at Uppsala University. He held academic positions at several schools, including at the Katarina Skola (1776) and Klara Skola (1782). As a cartographer one of Djurberg's idiosyncrasies was using alternative indigenous nomenclature: Vingandacoa for North America and Ulimaroa for Australia, among others. Learn More...


Franz Anton Schraembl (1751 - 1803) was a Vienna based cartographer working in the later part of the 18th century. Schraembl was burnin Vienna and founded his firm in 1787, partnering with fellow Austrian Franz Johann Joseph von Reilly (1766 - 1820), and began his great work, the Allgemeiner Grosser Atlas in the same year. This ambitious large format atlas was to be based upon only the most up-to-date cartographic information available and is based upo the work of cartographers like D'Anville and explorers such as Cook, Roberts, and others. The atlas was finally finished in 1800 but becoming the first Austrian world atlas. The work unfortunately enjoyed only relatively minimal circulation, possibly due to its high cost. The low sales, unfortunately, drove Schraembl into insolvency. His business eventually recovered somewhat with the publication of a diverse array of materials ranging from literature to art books. When Franz Anton died in 1803, the firm was taken over by his widow Johanna and her brother, the engraver Karl Robert Schindelmayer. From 1825 the firm was taken over by his son, Eduard Schraembl. Learn More...