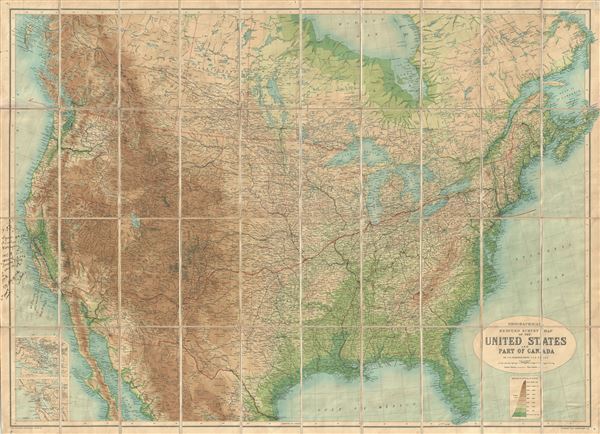 This is an uncommon example of the 1915 pocket map of the United States and Part of Canada issued by J. G. Bartholomew. This topographical map covers all of the United States, along with parts of Canada and Mexico. The map is highly detailed and notes several towns, cities, rivers, islands and other topographical details. It also notes important railway routes throughout. Relief is shown in nine colors ranging from olive green to dark brown indicating elevations between the contours of 0 to above 10000 feet. Two insets detailing the vicinity of San Francisco and Victoria are included in the lower left quadrant. This map was manufactured in Great Britain by John Bartholomew & Sons Ltd., Edinburgh.

Very good. Dissected and mounted on linen. Minor wear along original fold lines. Several pencil and ink markings along left margin near California. Blank on verso.
Looking for a high-resolution scan of this?