1835 Bradford Map of the United States 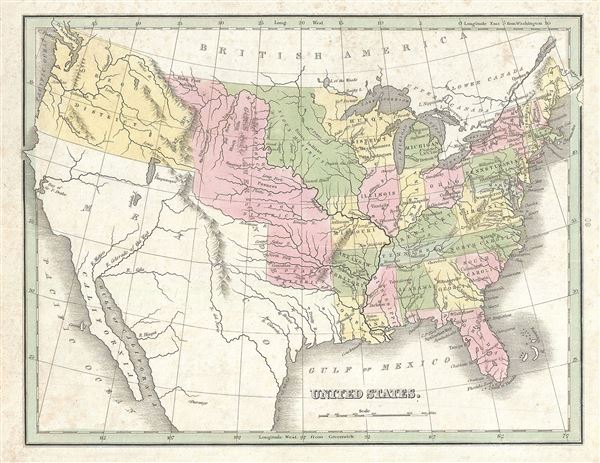 1835 Bradford Map of the United States

This is a beautiful example of the 1835 map of the United States by the important American mapmaker T. G. Bradford. It covers all of the territory claimed by the United States from Atlantic to Pacific and from British America (Canada) to the pre-1849 Mexican border. Bradford's map offers fine detail throughout with elevation rendered by hachure and political regions demarcated with color coding. It also shows all the Great Lakes Ontario, Erie, Superior, Michigan and Huron. Niagara Falls and the Eire Canal are noted. Also notes American Indian nations including the Sioux and Blackfoot Indians.

As this map predates the Mexican American War and the annexation of Texas, Upper California and Texas are not yet part of the United States. An early state and territorial configuration is presented with a unified Virginia and Wisconsin identified as Huron District, embracing modern day Minnesota. The Oregon District, Mandan District and Sioux Districts are identified.

Shows the United States' claim of British Columbia as far north as 54 40.' In the first half of the 19th century the Pacific Northwest was the last frontier in the century's long slaughter of the American beaver in the name of European fashion. Both the British, in the name of the Hudson Bay Company, and the Americans, championed by John Jacob Astor's Pacific Fur Company, were eager to claim monopolistic right over the region. Astor's establishment of Fort Astoria on the Columbia River, marked here, only served to further tensions with the Northwest Company - the Pacific subsidiary of the Hudson Bay Company. The dispute escalated, giving rise to the Oregon Boundary Dispute and the American expansionist slogan 'Fifty-four Forty or Fight!.' The dispute was not resolved until the 1846 Oregon Treaty which, through concessions on both sides, formally set the boundary at the 49th parallel.

Lake Michigan is slightly malformed and distended on the vertical axis, only seen in maps from the 1830s. Bradford curiously charts two lakes in the Great Basin, one labeled Timpanagos and another smaller lake further south labeled 'Salado.' He is following Escalante's discoveries as recorded on the Miera map. The Escalante expedition actually visited Utah Lake (identified here as Salt Lake), but only heard about the Great Salt Lake from local Native American Ute tribe. Miera, Escalante's cartographer, thus mapped Timpanagos as much larger than the unseen 'Great Salt Lake.'

This map was published as plate no. 60 in Thomas G. Bradford's 1835 Comprehensive Atlas Geographical, Historical and Commercial.  Bradford's atlas, published in 1835 was an important work on many levels.  First, it was one of the first American atlases to follow an encyclopedic format, offering readers extensive geographical and statistical tables to supplement the maps themselves.  Second, it was published in Boston and influenced the city's rise as a publishing center later in the 19th century (at the time most publishing in the United States was restricted to New York and Philadelphia).  Third, this atlas was the first to contain a separate and specific map showing the Republic of Texas.  Fourth and finally, Bradford's atlas in some instances broke the Euro-centric mold regarding atlas production.  Among other things, Bradford focused his atlas on the Americas and abandoned the classical decoration common in European atlases in favor of a more informational and inherently American approach.