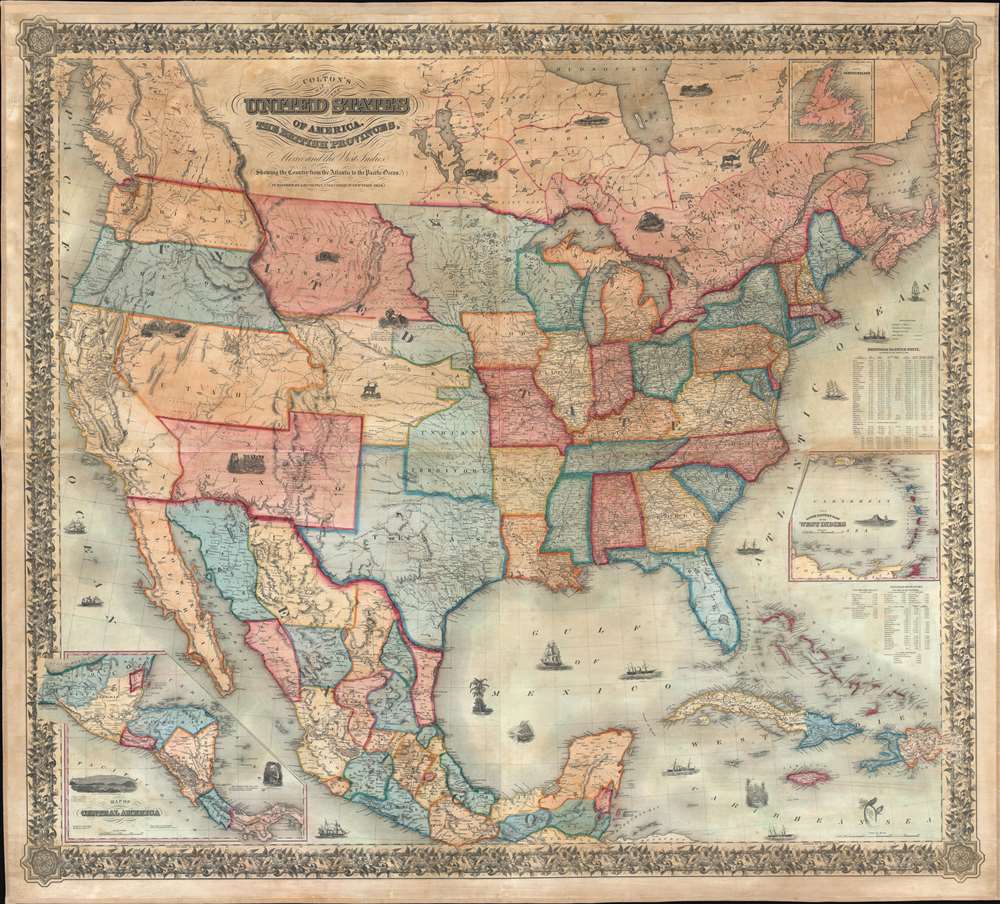 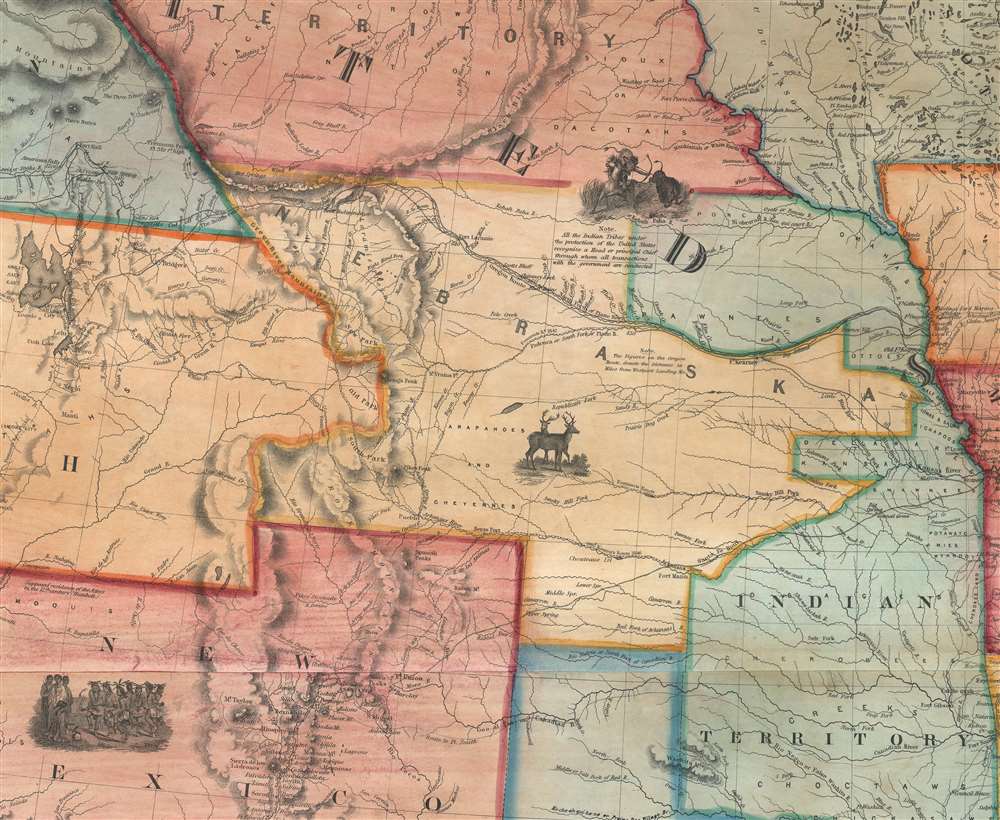 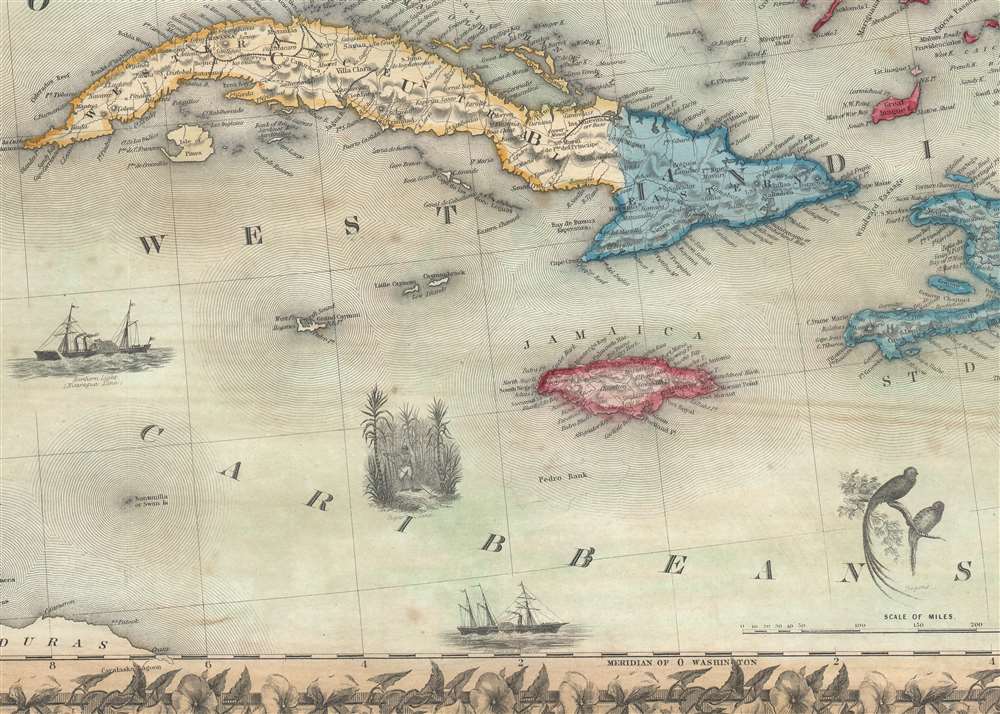 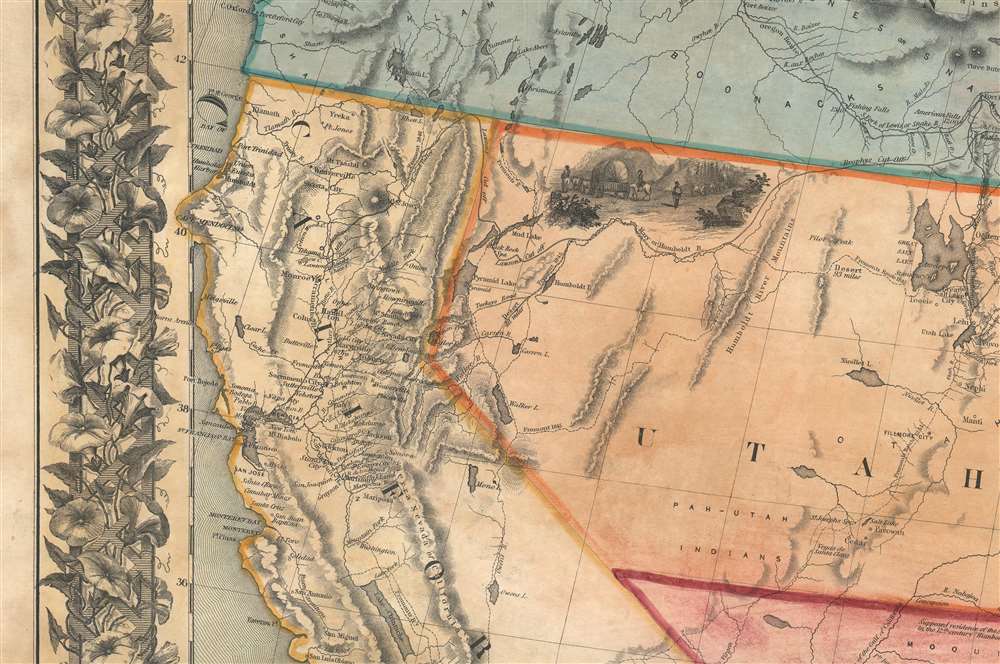 An ephemeral period in the American West following the Kansas-Nebraska Act.
$4,500.00

This is a large 1854 J. H. Colton wall map of the United States with significant Trans-Mississippi and Great Plains content. This is the largest and most significant of the three separate issue maps of the United States Colton issued in the 1850s. It covers the entire United States as well as most of Mexico, parts of southern Canada, and the Greater Antilles. Central America and the lower Antilles appear in insets. There are numerous ethnographical, geographical, and historical vignettes throughout including a wagon train, American Indians hunting, ships, palm trees, volcanoes, and more.

While the map is expansive in its coverage, the main focus of interest is the Trans-Mississippi, a region then undergoing active exploration, aggressive settlement, and near monthly political boundary changes. The early appearance of Nebraska Territory, unusual territorial borders for Indian Territory and Nebraska Territory, and a late curious appearance of Northwest Territory are of particular note.Ephemeral Treatment of Great PlainsThe highlight of this map is its highly ephemeral treatment of the Great Plains. The map follows the May 1854 Kansas-Nebraska Act. Nebraska appears as a large unincorporated territory bounded on the right by the strangely shaped Indian Territory and on the west by Utah and New Mexico Territories. To the east, the Indian Territory stretches from Texas to the modern-day Nebraska-Dakota border. Its odd shape roughly follows Indian Treaties dating to the 1820s and 1830s and is probably derived from the 1834 Hood map of the Western Territory. North of Nebraska, a large expanse of land extending to the Canadian border, incorporating modern day North and South Dakota, Wyoming, and Montana, is curiously identified as the 'Northwest Territory.' While the term 'Northwest Territory' typically applies to the 1787 Northwest Ordinance lands around Michigan, Wisconsin, and Minnesota, the use of it here is singular and unexplained. Within a few months these lands would be incorporated into the new Nebraska Territory and divorced from the new Kansas Territory to the south. The 1854 Kansas-Nebraska Act would likewise reconfigure the Indian Territory to appear much as Oklahoma does today.

James Gadsden's Purchase treaty was signed on December 30 of 1853 and the absence of the official new border suggests that Colton, generally a very conscientious mapmaker, was unaware of the changes when this map was issued - meaning it was probably printed late in 1853, despite the 1854 date. Colton does include the competing 1850 survey work of Yankee John Russell Bartlett, whose line extends westward from the Rio Grande about 40 miles north of El Paso, and the competing line of the southern astronomer James Graham well to the south. Bartlett, not a proper scientist, had fired his surveyor, Robert McClellan, and so followed the guidance of his Mexican compatriots, consequently mapping the line too far north according to the Treaty of Guadeloupe-Hidalgo. Graham, Bartlett's new head surveyor, recognized the error and saw it as an attempt to keep the southern states from building an easy and practical railroad to the Pacific. Graham consequently advocated for his own line further south. Bartlett's line, as the leader of the survey, was ultimately used, but when the time came to build the Southern Pacific Railroad, the matter had to be rectified in the form of the Gadsden Purchase.

Colton first issued this map in 1853, as stated in the copyright, and Wheat notes an 1853 edition, but we have not been able to positively identify any example with 1853 in the title - although we presume that such exists (or existed). The date in the title here is 1854, but the content of the map is more accurate to the geography of 1853 than to what appears on definite 1854 states of the map. This, compounded with the absence of the official lines of the Gadsden Purchase, ratified in December of 1853, suggest an issue date of late 1853, despite the 1854 date.

There are at least four major states of this map with several variants likely:As a final note, this map is commonly issued in wall map format, varnished, and on rollers. This map was printed by David McLellan, 26 Spruce Street, New York.


David McLellan (September 20, 1825 - July 26, 1867) was a Scottish-American lithographer and printer active in New York City in the middle part of the 19th century. McLellan was born Pollockshaws, Renfrewshire, Scotland. He lived in Glasgow for about 20 years, where he mastered printing and lithography under his father James McLellan (1798 - 18??). In 1847, he immigrated to New York City with his brother, James McLellan. David initially printed under his own name, 'David McLellan (1851 - 1854), the with in partnership with his brother, James, as 'D and J. Mclellan' (1855 - 1860). Aging under his own name during the Civil War from 1862 -1863. Then as 'David McLeland and Brothers' (1864 - 1866). He joined the mostly Scottish 79th 'Highlander' Regiment, with whom he participated with the rank of 'Major' in the American Civil War (1862 - 1865). During his long career as a New York lithographer, McLellan worked with many prominent publishers, including J. H. Colton, Edward Valois, James Ackerman, the U.S. Coast Surrey. After his death in 1867 he was interred in Greenwood Cemetery. The McLellan printing business continued after his death under the imprint of John McLellan (1867 - 1868) and J. (John) and R. (Robert) McLellan (1869). No further McLellan work is known after 1869. Learn More...