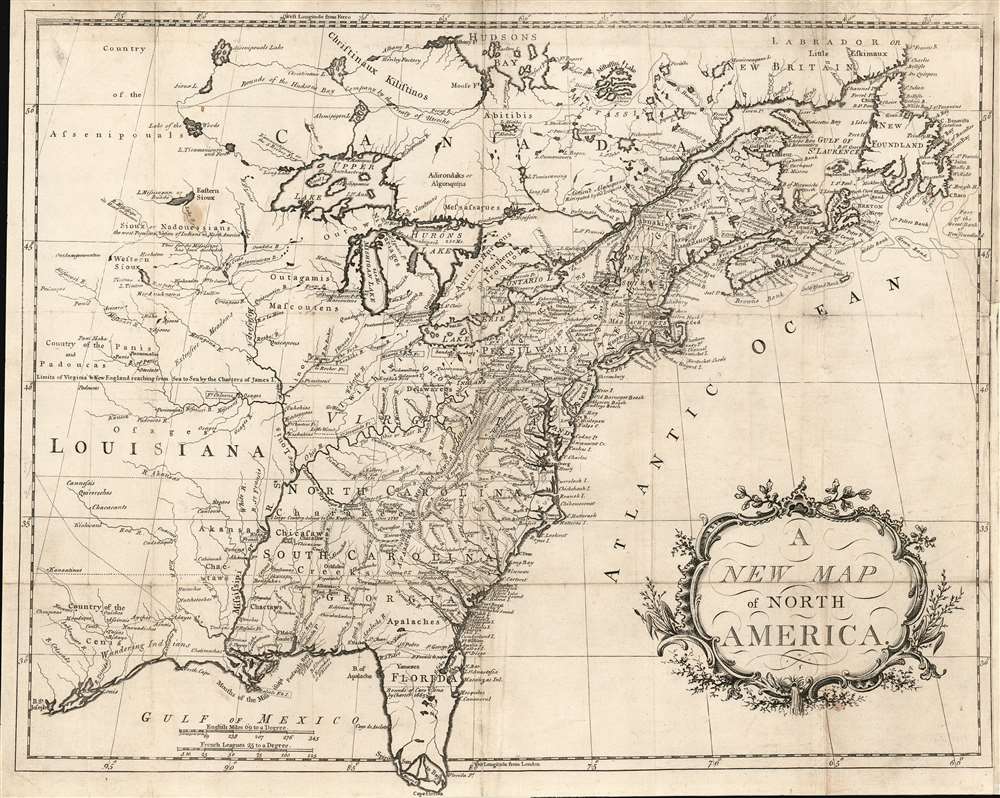 An Attractive, Reduced Version of 'The Most Important Map in American History'.
$2,000.00

This is an attractively-engraved map (after Mitchell) of the British Colonies in North America, printed in Dublin by an anonymous printer to accompany a (plagiarized) history of the American Revolution. John Mitchell's monumental 1755 A Map of the British and French Dominions in North America - the map Lawrence Martin hailed as 'The Most Important Map in American History' - provided the source for this map. Indeed the anonymous publishers could hardly have chosen more apt a source to copy. Despite the Mitchell being twenty five years old, it had been updated several times and remained the map-of-record as the war came to a close. The Mitchell would be the map used by representatives of Great Britain and the United States at Paris while negotiating the treaty that ended the war. Thus, this reduced and simplified version of the Mitchell was aptly chosen as a tool to acquaint readers with the theatre of war for the Revolution.

Traces of the French and Indian War

Though this map appeared in a history of the American Revolution, the content of its source provided a better record of the French and Indian War. Consequently, the Ohio River Valley in particular is rich in detail, identifying the numerous French forts and the handful of encroaching English forts among them. There are many notes, similarly drawn from the Mitchell, explaining British territorial claims, describing Native American tribes, and elucidating geographical points throughout the map.

This map, as did the Mitchell before it, drew on the Bellin/ Charlevoix cartography for the Great Lakes, including the imaginary islands of Lake Superior. It is a comment on the chilling effect of the French and Indian War that English geographers had no better information on these lakes than that of the French explorers of the 1740s. As small as the distances appear to the modern eye, the Great Lakes all fell beyond a contested frontier and it would not be until after the wars that better mapping would become readily available.

Our Kind of Pirates

This map appeared in a 1785 Dublin work entitled The history of the war in America between Great Britain and her colonies. This was pirated from Edmund Burke's An impartial history of the war in America, collected in 1780 from his work in the 'Annual Register.' Unsurprisingly, the 'authors' of the plagiarized work did not make their identities known, instead flying the banner anonymously as 'The Company of Booksellers.'

18th century Irish publishing was a riotous and bustling affair, particularly in Dublin, fueled by vagaries in British copyright law. The 1709 English Copyright Act did not apply to Ireland at all: a further act of 1739 made it illegal for Irish reprints of English books to be sold in England, but did not prevent Irish publishers from selling such pirated works in Ireland or to the American colonies. Consequently, Dublin printers were able to publish - without payment to English authors or publishers - whatever printed works they thought salable in these markets. George Grierson’s ‘editions’ of Moll’s maps, as an example, benefited from this gaping loophole. Further efforts by London publishers to control Irish imprints of their work in 1785 came to naught, but the 1800 incorporation of Ireland into the United Kingdom brought the Copyright Act to bear, with the effect of virtually destroying Irish publishing (thanks, largely, to their reliance on piracy as a business model.)

This map appears to be scarce, and at any rate does appears in OCLC separately only in the Library of Congress. The Company of Booksellers appear to have been successful, or at least ambitious, as the volume appears to be well represented in institutional collections.

The Company of Booksellers was an 18th century Dublin-based collective formed, probably in 1762, to aid in cooperation and the exchange of books among booksellers. This fellowship was intended to share both risk and profit in the publishing industry in Ireland. Since the predominant share of the Irish book trade at that time was the vigorous piracy of books published in England, the anonymity of its members also appears to have been an essential feature of the organization. Following the 1800 absorption of Ireland into the United Kingdom - and the consequent application of the Copyright Act to Irish publishing - Irish booksellers decamped en masse to the United States. Many set up shop in Philadelphia where, in 1802, a Philadelphia Company of Booksellers would form. Learn More...


John Mitchell (April 13, 1711 – February 29, 1768) was and British-American mapmaker of great significance. He is known for one and only one map, the 'Mitchell Map', considered the most important map in 18th century American history. Mitchell was born in Lancaster County, Virginia, the son of a prosperous planter and merchant. Like many of his social peers, he was educated in Europe, at Scotland at Edinburgh University, where he studied medicine. Mitchell practiced medicine in Virginia for a short time prior to the French and Indian War. He was elected to the original American Philosophical Society in 1744. In 1745 Mitchell argued that a series of epidemics occurring in Virginia were due to unsanitary troop ships from Britain - at the time a revolutionary idea. He relocated to London in 1746 - presumably for the agreeable climate. Mitchell never practiced medicine in London, but was known to be an avid botanist, and was considered an exotic plant expert in London society circles. He was elected as a fellow of the Royal Society in November 1748, his candidature citation describing him as

A Gentleman of great merit and Learning, who Some time Since communicated to the Royal Society a very curious dissertation concerning the Colour of the skin in Negroes, and who from his long residence in Virginea, and from his great application to the Study of Natural history, especially Botany, is very well acquainted with the vegetable productions of North America, being desirous of being admitted a fellow of the Royal Society, is recommended by us from our personal knowledge of him as highly deserving the Honour he desires, as we believe he will be (if chosen) a usefull and valuable member of our Body.

As an educated American adopted into British high society, Mitchell became the de facto expert on all matters North American. In 1749, during a time of ever-increasing political tensions between British and French interests in America, Lord Halifax contracted Mitchell to produce a large and detailed map of British and French dominions in America. While embracing the most advanced geographical data, Mitchell also advocated pro-British interpretation of political boundaries. The resulting map was thus geographically unimpeachable and reframed the cartographic perspective from French to British terms. The map proved significant and was used in most subsequent treaties. Michell issued 3 editions in his lifetime. He died in London in 1768. Learn More...

The Company of Booksellers, 'The history of the war in America, between Great Britain and her colonies from its commencement to the end of the year 1778...' Dublin, 1779-1785.