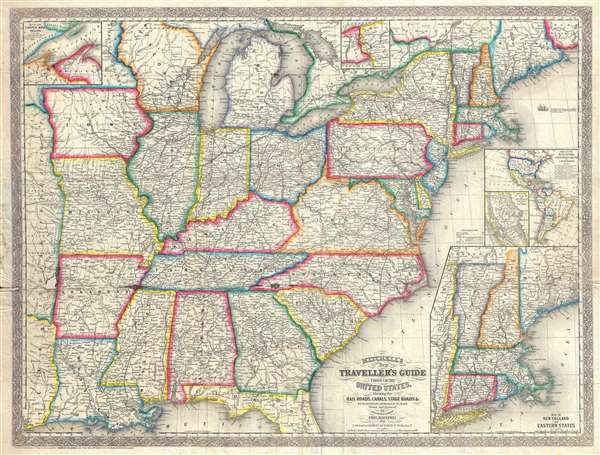 An uncommon separately issued 1857 pre-Civil War pocket map of the United States issued by Charles Desilver based on earlier maps by Samuel Augustus Mitchell. The map covers the United States from the Atlantic seaboard west to the first tier of states beyond the Mississippi, with insets offering additional detail in the New England Region, the Lake Superior Copper Mine Region, and in the California Gold Region. As might be anticipated from a map designed for the 'traveler,' Desilver offers exceptional detail with regard to railways, canals, and roads. It also offers an inset illustrates routes to California, emphasizing continued interest in the California gold discovery.

This map was drawn by J. L. Hazzard and I.S. Drake. Desilver first issued this map in 1856. This is the second Desilver edition, dated 1857. It is uncommon on the market.

Good. Some wear and creasing on original fold lines. A few areas of repaired loss, lower left quadrant. Removed form binder, which is not present. Ready for framing.