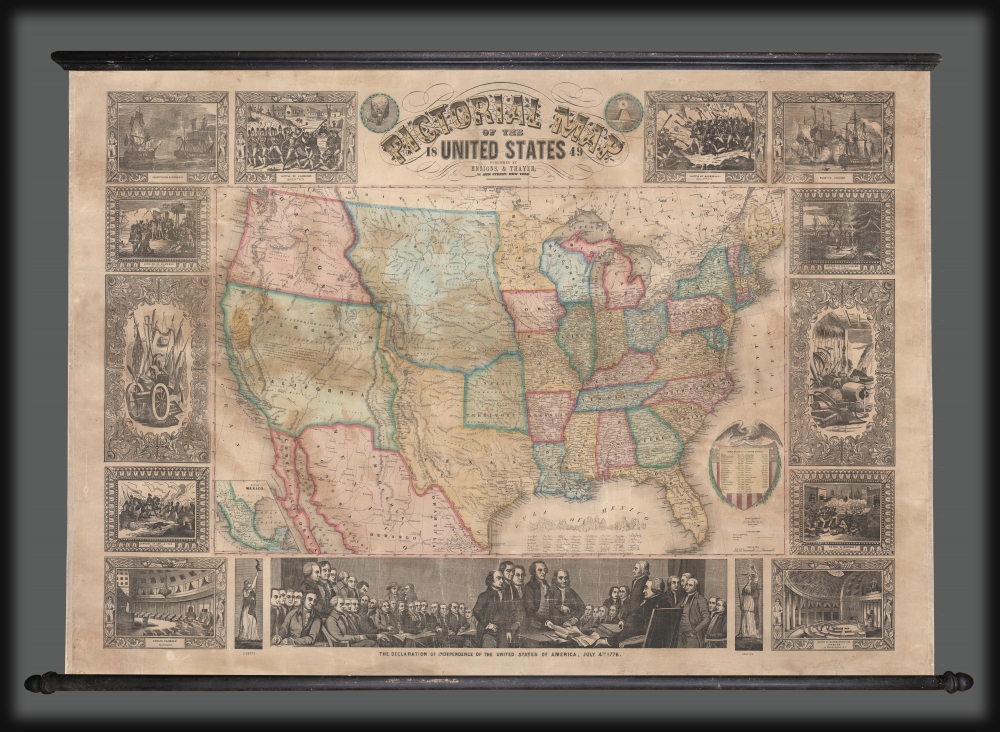 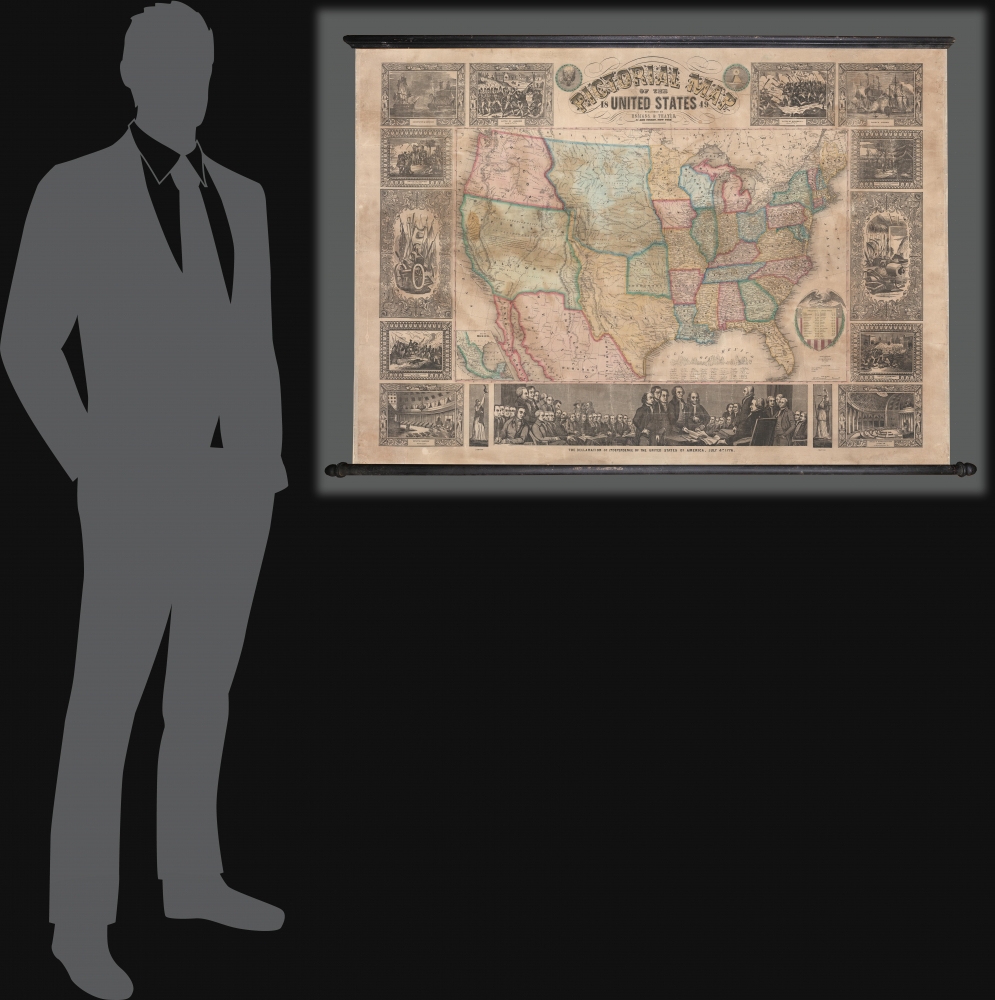 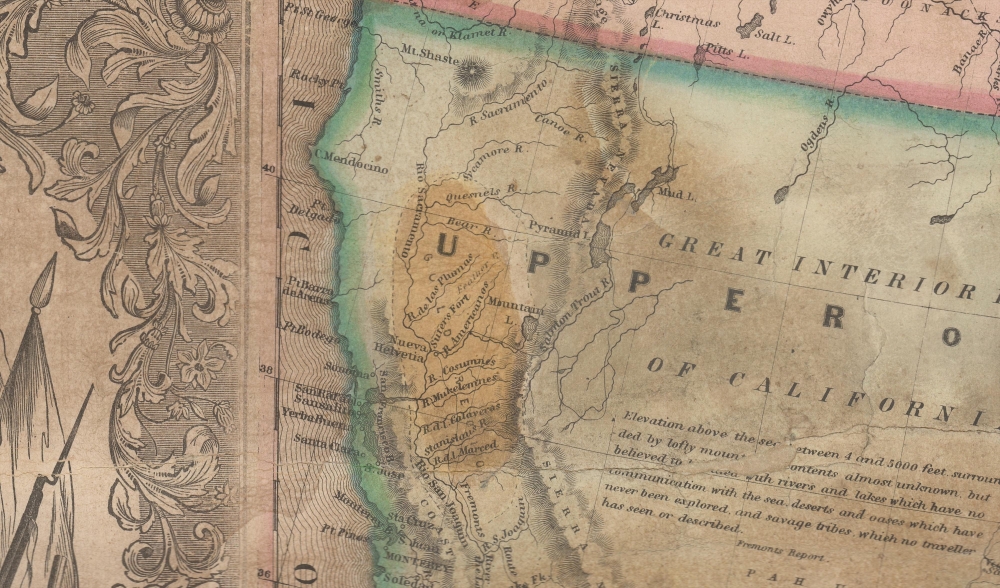 A scarce American wall map of the United States and Mexico issued by Ensign and Thayer in 1849 - at the height of the California Gold Rush and the end of the Mexican-American War (1846 - 1848). This is one of the few maps to identify San Francisco as Yerba Buena, exhibit Texas's fullest territorial claims, and show Upper California (California, New Mexico, Arizona, Utah, Nevada, Colorado, etc.) prior to its breakup into territories. It is also the only map from this series to highlight the California Gold Region.

As the title suggests, the map covers the United States in full and is one of the earliest examples of this map to extend from coast to coast - reflecting the new borders claimed by the United States in 1846, and formalized by the 1848 Treaty of Guadeloupe-Hidalgo, which ended the Mexican-American War. It also highlights the gold region in California. At this time, no railroads extended west of the Mississippi. Sacramento, founded in 1850, is not present, but the map notes John Sutter's colony of New Helvetica and nearby Sutter's Fort. Great Salt Lake is embryonically mapped, illustrative of the limited knowledge then available regarding the geographical disposition of the Great Basin. Nebraska extends northwards to the Canadian border and Washington/Oregon have their eastern terminus at the Rocky Mountains. South of Nebraska, the Indian Territory is separated out, with various tribal reservations identified.

The discovery of gold at John Sutter's mill by James Wilson Marshall (1810 - 1885) in January 1848 was one of the most definitive moments in American history. Coming at the end of the Mexican-American War (1846 - 1848), the timing of the discovery could not have been more propitious. The combination of new seemly unlimited territory and the lure of gold led to a stampede of adventurers, prospectors, merchants, and homesteaders eager for a new life on the frontier. The Gold Rush was not limited to Americans crossing the Great Plains. European, Australian, and even Chinese immigrants rushed into California hungry for their part of the great strike. This Great Migration transformed the United States in the span of just a few years from a former colony into an expansive transcontinental nation on the cusp of becoming a world power.

Yerba Buena was the original Spanish name of the settlement that later came to be known as San Francisco, California. The name is derived from the yerba buena (Clinopodium douglasii) plant, an herb endemic to the peninsula. Located near the northeastern end of the San Francisco Peninsula, between the Presidio of San Francisco and the Mission San Francisco de Asís, the Yerba Buena settlement was arranged around a plaza, now Portsmouth Square. It was intended as a trading post and resupply center for ships visiting San Francisco Bay. The name survived after the Mexican-American War until 1847, when Washington Allon Bartlett (c. 1816 - February 6, 1865), the first U.S. Citizen to be named Alcalde of Yerba Buena, officially changed the name to San Francisco. 'Yerba Buena' is thus extremely ephemeral, and appears on only a few maps issued from about 1846 to 1849. On this map, it appears only in the 1847, 1848, and 1849 issues.

The Borders of Texas

This map exhibits Texas during the ephemeral period between its Annexation in 1846 and the Compromise of 1850, in which the present day borders were established. The borders of the Republic of Texas were in dispute from the earliest days of the Texan Revolution. The Republic-claimed borders followed the Treaties of Velasco between the newly created Texas Republic and Mexican leader, Antonio López de Santa Anna. The treaties established an eastern boundary following the 1819 Adams-Onís Treaty between the United States and Spain, which established the Sabine River as the eastern boundary of Spanish Texas and western boundary of the Missouri Territory. The Republic's southern and western boundary with Mexico was more nuanced. Texas claimed the Rio Grande del Norte as its western and southernmost border, while Mexico argued for a boundary much further east at the Nueces River. When Texas was annexed into the United States, the agreement followed the Republic claimed boundary, thus absorbing Mexican claimed territory as far west as Santa Fe. This escalated already existing tensions between the United States, the former Republic of Texas, and Mexico, ultimately triggering for the Mexican-American War (1846 - 1848).

True to its descriptive title, the map is surrounded by numerous pictorial vignettes illustrating, from the title clockwise: the 1775 Battle of Bunker Hill, Perry's Opening of Japan, the Landing of the Pilgrims in 1620, farm tools, the 1846 Battle of Monterrey (Mexican-American War), the United States House of Representatives Chamber, Justice personified, the Signing of the Declaration of Independence (largest illustration, bottom center), Liberty personified, the Senate Chamber, the capture of General La Vega in 1846 (Mexican-American War), weapons and armor, the Landing of Columbus 1492, the Constitution and Guerriere (Navy Ships), and the 1775 Battle of Lexington. In later editions, the Battles of Bunker Hill and Lexington, from the American Revolutionary War, were replaced with busts of the presidents.

A rare edition. Phelps and Ensign began issuing decorative wall maps of the United States in 1839 - which they advertised as Ensign's Travellers' Guide. That map used some of the same border and vignette art, but as a map terminated at the Mississippi. That map was dramatically expanded westward to account for the Texas Revolution (1836) in 1840. A further expansion ensued in 1847 - creating this map, by Ensign, Thayer, and Phelps, the first of the lineage to extend to the Pacific. The map was fully re-engraved, rescaled, and retitled as a Pictorial Map of the United States, this being the third edition of that series. A second edition was issued by Ensign and Thayer in 1848. Once the Mexican-American War ended in 1848, a larger run must have been issued, as the 1849 (Rumsey 5057) and 1850 editions appear more frequently. We are aware of another issued in 1852 (Rumsey 3508), then again in 1853, followed by an edition by Ensign, Bridgman, and Fanning in 1855 (Rumsey 265). A final edition, also by Ensign, Bridgman, and Fanning, appeared in 1858. All editions feature border work engraved by J. M. Atwood. - although often in different configurations, suggesting that the border art pieces were separate plates.

The early editions of his map, issued during the Mexican-American War, are scarce. The maps surged in popularity after the war, reflecting increased interest in the American West fueled by both the Gold Rush and general expansionism, so much revised editions appearing after appear more often.

Good. Professionally restored and backed on fresh linen. Some cracking, stabilized. Some staining. Accompanies but not attached to original rollers - can be reattached on request.