1886 Graf Map of the United States 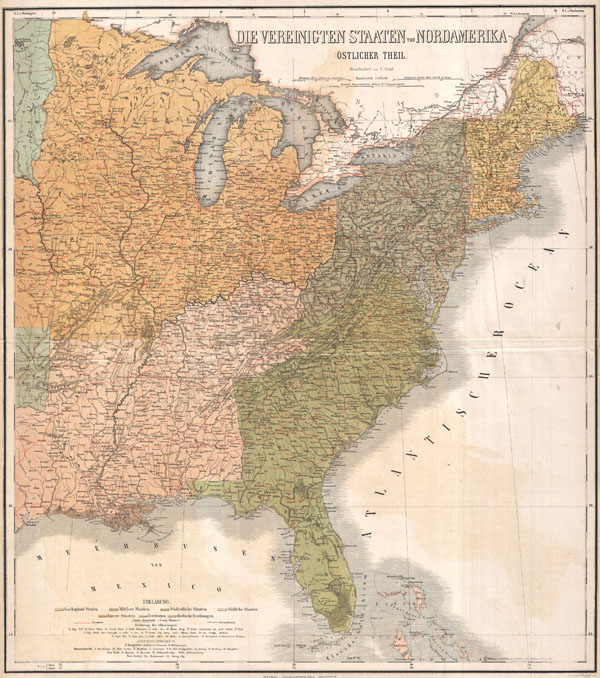 1886 Graf Map of the United States

This is a rare 1886 example of C. Graf's map of the United States of America. The map covers the eastern part of the United States from eastern Texas to the Atlantic, extending northward as far as Lake Superior, and southward to the Florida Keys. The various states are segmented into unusual color coded zones including New England, the Middle States, the Southeastern States, the Southern States, the Inner States, the Territories, and with regard to Canada, the British Possessions. This map first appeared around 1870 and went through several editions – this being the latest and the least common. Drawn by C. Graf and published by the Geographisches Institut of Weimar as plate no. 62 in the Hand-Atlas des Himmels und der Erde.

The Geographischen Institutes Weimar (fl. 1804 - c. 1903) was a German map and globe publishing house and geographical research institute based in Weimar. The organization primarily focused on republishing and improving upon the works of earlier cartographers, including Kitchin, Jefferys, Carey, and others. In general, its publications are known for their fine engraving, attention to detail, historical accuracy, and overall high quality. The firm was founded in 1804 by Friedrich Justin Bertuch (???? - c. 1845) and, on his death, passed to his son Robert Froreip (???? - 1855), then to Louis Denicks of Luneberg, then in 1859 to Voigt & Günther, in 1883 to F. Arnd, from 1890 - 1893 to Julius Kettler, and in 1903 to Max Wedekind. During the institute's height in the early 19th century, most of its cartographic publication was overseen by Carl Ferdinand Weiland (1782 - 1847). The firm also employed the cartographers Franz Xaver von Zach, Adam Christian Gaspari, Heinrich Kiepert, Karl and Adolf Graef, Julius Kettler, Carl Riemer and Karl Christian Bruhns. Learn More...