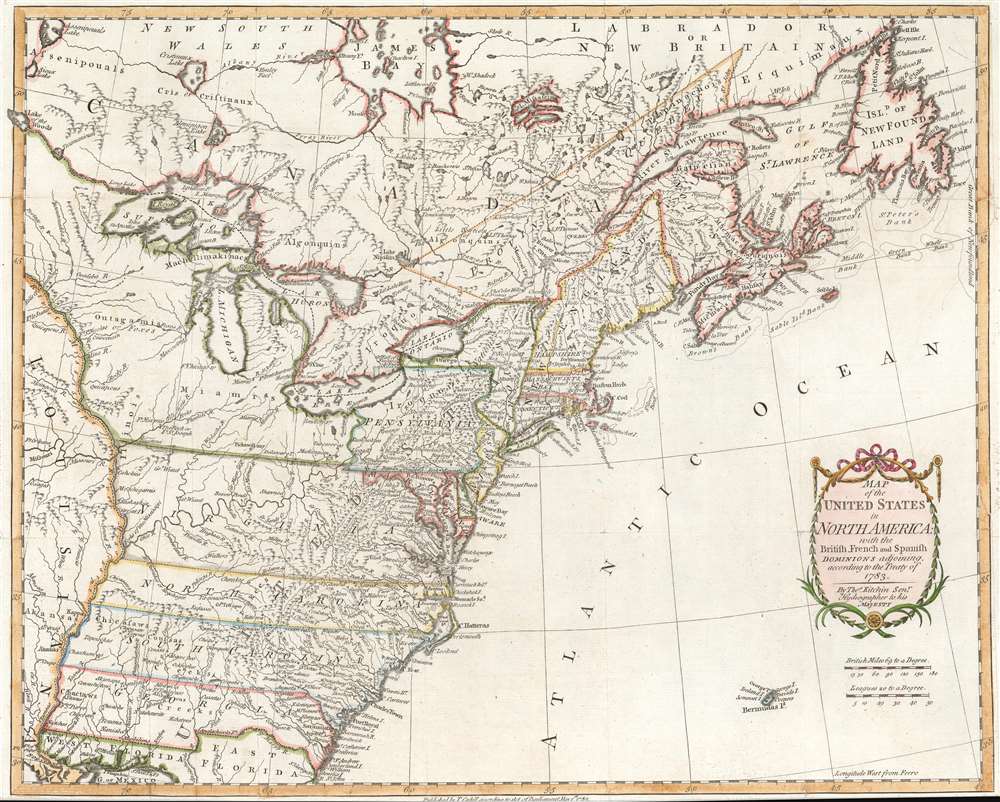 One of the earliest obtainable English maps to name and recognize the newly created United States.

After nine years of war between the mother country and its American colonies, this first edition 1783 Thomas Kitchin map of the United States is one of the earliest obtainable English printed maps that names and recognizes the newly independent United States of America. The map depicts the nascent country from just west of the Mississippi River to the Atlantic Ocean and from Hudson Bay to New Orleans and the Gulf of Mexico. Unique geography catches the viewer's attention, with Pennsylvania occupying a fair portion of southern New York and Virginia, North Carolina, South Carolina, and Georgia stretching from the Atlantic coast to the Mississippi River. Myriad cities, towns, and villages are labeled, including Philadelphia, New York, Boston, Newport, Baltimore, Charleston, and Savannah. Native American tribes are referenced, including the Iroquois, Miami, Cherokee, Creek, Chickasaw, and Choctaw. Important coastal locations, such as Cape Cod, Boston Harbor, Delaware Bay, Chesapeake Bay, Cape May, Cape Hatteras, and Cape Fear are also identified. All five Great Lakes are labeled and rivers, lakes, and mountains are noted.


Thomas Cadell the elder (November 12, 1742 - December 27, 1802) was an English publisher and bookseller. Born in Bristol, Cadell was apprenticed to a London bookseller named Andrew Millar in March 1758, and became Millar's partner in April 1765 after finishing his seven-year apprenticeship. He took over the business with the help of Millar's assistant following Millar's death in 1768. Not only was Cadell a successful bookseller, but he also found success in publishing, publishing poetry by Robert Burns, and works by jurist William Blackstone, economist Adam Smith, and Edward Gibbon's Decline and Fall of the Roman Empire. Cadell married the daughter of Reverend Thomas Jones on April 1, 1769, with whom he had two children, a son and a daughter. Cadell retired in 1793 and his son, Thomas Cadell the younger (1773 - 1836), took over the business. Cadell died at home of an asthma attack on December 27, 1802. Learn More...