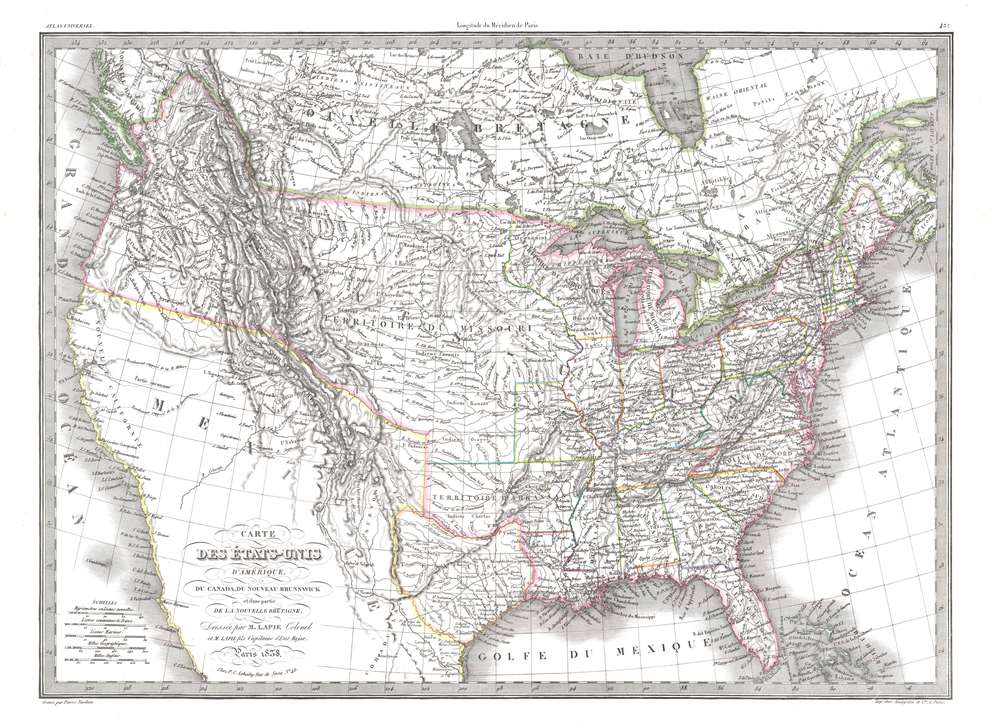 Features a depiction of the Republic of Texas at its smallest.

This is an 1838 Pierre and Alexandre Lapie map of the United States and one of the earliest non-American maps to include the Republic of Texas. The map depicts the region from the Pacific Ocean to the Atlantic Ocean and from 'New Britain' (Canada) to Mexico. Ephemeral geographic zones are noted, among them the Northwest Territory and the Arkansas Territory, inclusive of the Indian Territory. The Missouri Territory encompasses all of the Midwest and stretches to the Pacific Ocean. The map’s color coding suggests that the borders of the United States include British Columbia. American Indian tribes, such as the Pawnee, Blackfeet, Shoshone, and Sioux are identified.

The National Road, begun in 1811 and completed in 1837, was the first major improved highway in the United States. The road, illustrated here by a thin black line, connected the Ohio and Potomac Rivers and stretched from Cumberland, Maryland to Vandalia, Illinois, the Illinois state capital at the time. Construction of the road came to an end when federal funding dried up in the Panic of 1837.

The Columbia District, situated in the Pacific Northwest region of North America, was a fur trading district originally explored by the North West Company beginning in 1793. The Hudson's Bay Company, the North West Company's main rival in the fur trade, and the North West Company violently competed for trapping rights in the region, which even escalated into a small war, known as the Pemmican War. To put an end to this nonsense, the British government forcibly merged the two companies in 1821. By this time, the Columbia District, or as it had become known the Columbia Department, overlapped significantly with the Oregon Territory claimed by the United States, which eventually led to a border dispute between British North America (Canada) and the U.S. A treaty signed in 1846 formally ended the border dispute and set the U.S.-British border at the 49th parallel.

This map was created by Pierre and Alexandre Lapie and engraved by Pierre Tardieu for publication in the 1838 edition of their Atlas Universel de Géographie Ancienne et Moderne published by P.C. Lehuby. Only one example of the 1838 edition of Lapie's map of the United States is catalogued in the OCLC and it is part of the collection at the Bavarian State Library in Munich, Germany.