1836 Brue and Picquet Map of the United States 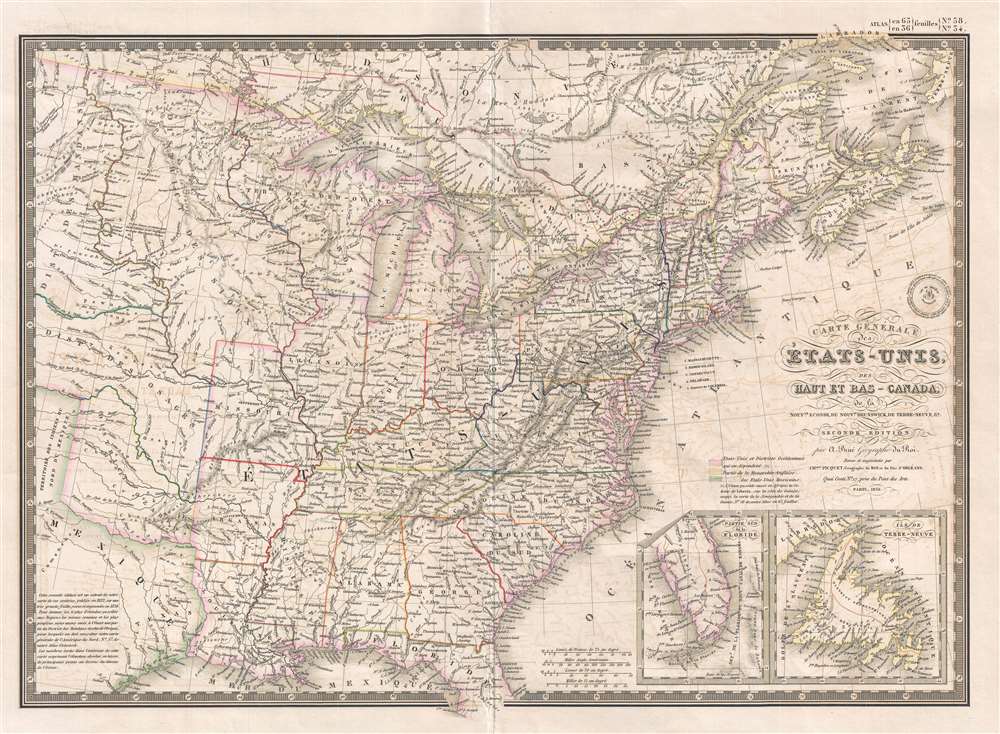 1836 Brue and Picquet Map of the United States

Highlights numerous Native American tribes in the American West, including the Sioux and Osage.
$200.00

This is an 1836 Adrien-Hubert Brué and Charles Picquet map of the United States. The map depicts the region from the Black Hills to the Atlantic Ocean and from Canada to Texas and the Gulf of Mexico. Beautifully engraved, myriad cities, towns, and villages are labeled throughout, along with rivers, lakes, and other physical features. The Northwest Territory is labeled, along with each of the states the part of the Union. West of Arkansas and Missouri, numerous American Indian Districts and tribes are identified, including the District of the Sioux, the District of the Osage, and the District of the Mandans. Although by 1836 the Texas Revolution (1835 - 1836) had already begun, its outcome was anything but certain and so Texas here is shown as part of Mexico. Two inset maps are situated in the lower right corner, with one illustrating the peninsula of Florida and the Florida Keys, and the other depicting Newfoundland and a part of Labrador. A block of text in the lower left corner situates the map in the context of the atlas published by Picquet. Picquet's seal is located along the right border just above the title.

This map first appears in 1832. Brue himself died in 1832, the year of his map's first issue, but his publisher, Charles Picquet, continued to update and reissue his maps weill into the 1840s. The present example is the 1836 second edition.

Adrien-Hubert Brué (1786 – July 16, 1832) was a French cartographer active in the late 18th and early 19th centuries. Brué served on various ships from age 12. At 14 he was commissioned to the crew of the Naturalist, one of the two ships in Baudin Expedition (1800 – 1804) to the South Pacific. Later in life, Brué turned to cartography where his work was known for remarkable clarity and accuracy. Brué eventually acquired the prestigious office of Geographe du Roi and often signed his maps as such. In this position Brué contributed to thousands of maps and numerous atlases. Like most cartographers many of his maps were published posthumously by his partner, Charles Picquet's son and heir, Pierre-Jacques Picquet, and were still being updated and republished decades after his death. Learn More...