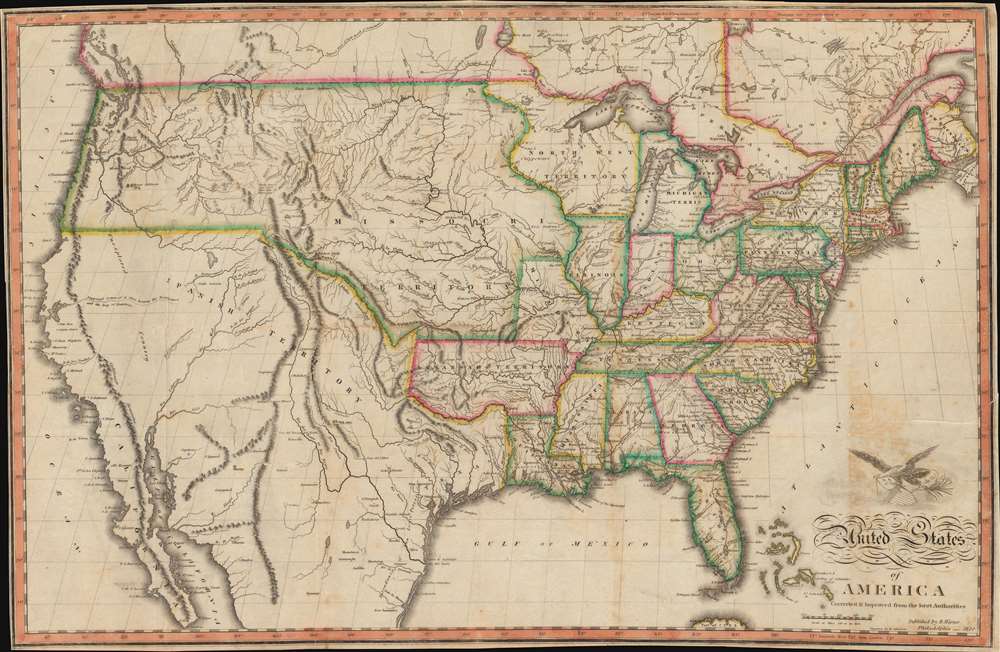 Among the earliest American maps to illustrate the United States stretching from coast to coast.
$1,750.00

An uncommon 1820 map of the United States by Benjamin Warner. Following closely after John Melish's wall map of 1819, this is one of the earliest maps to depict the United States extending from Atlantic to Pacific. As Wheat notes, this map is significant as one of several issued up to about 1823 that galvanized geographic ideas regarding the only tenuously explored lands beyond the Rocky Mountains, including the mythical 'River of the West' or 'Buenaventura' and other speculations.

The United States after the Adams-Onís Treaty

Following the 1819 Adams-Onís Treaty (on the map identified as the Florida Treaty), this map is among the earliest to include Florida as part of the United States. The treaty also established the Mexican-American border, shown here extending from the Pacific at 42 degrees North along the Arkansas River to 100 degrees West, then along the Red River to the Sabin River and the Gulf of Mexico. The lands to the north of this division, collectively identified as the Missouri Territory, are well mapped for the period, giving evidence to the work of Lewis and Clark with numerous references to their voyages present throughout - including the point 3,000 miles from the Mississippi where expedition's canoes could no longer proceed. The Arkansas Territory, also established as an indirect result of the Adams-Onís Treaty, is illustrated at its ephemeral fullest, extending westward as far as the Mexico (Texas) border. The territorial capital is identified simply as 'Post' (Arkansas Post). Little Rock, further up the Arkansas River, would not be founded until 1821.

Perhaps the map's most compelling geography lies in the Mexican territory that would eventually become California, Utah, Nevada, Arizona, and New Mexico. Stretching westward from the Rocky Mountains to the Pacific, this region had been only occasionally penetrated and was, as the map suggests, 'Unexplored Country.' The Great Salt Lake appears in embryonic form with only its northwestern borders mapped. It is labeled Valle Salado, a term translating to 'Salt Valley' dating to the 1776 Escalante Expedition. The apocryphal Buenaventura River is illustrated passing from San Francisco Bay easily through the California Coastal Ranges and terminating suggestively close to the Great Salt Lake, before continuing again from the top of the lake and heading northwest into the Rocky Mountains. Of the Sierra Nevada range there is no suggestion. In Texas, there is good detail for the period, much of which is drawn from Humboldt and Pike. The delineation of the Rio Del Norte / Rio Bravo, or as it is now known the Rio Grande, is exceptionally bold.

This map was created and published by Benjamin Warner in 1820. There is only one state but several editions, including one issued for William Guthrie's Geography. The present original color example appears was separately issued as a folding pocket map on onionskin style paper. We note a single example in OCLC, part of the collection at the University of Michigan.

Benjamin Warner (fl. c. 1800 - 1830) was an American bookseller and publisher based in Philadelphia during the first half of the 19th century. Waner was a Pennsylvania Quaker who partnered with Jacob Johnson, a bookseller, printer, and inkmaker to produce numerous imprints. He maintained a location at 147 High Street (147 Market St) Philadelphia, as well as shops in Richmond, Virginia and Charleston, South Carolina. His apprentices included John Grigg, later known for medical imprints. Learn More...


Hugh Anderson (c. 1790 - 1854, fl. 1811 - 1854) was an American line and stipple engraver based in Philadelphia, PA. Anderson was not specifically a cartographic engraver and his corpus includes landscape views, allegorical images, frontispieces, architectural, anatomical, and animal engravings, as well as maps. His name appears in Philadelphia directories from 1811 to 1819 and again from 1822 to 1824. Anderson was most likely Scottish and probably trained in Scotland before immigrating to the United States. There is some suggestion that Anderson was also a watchmaker and that he relocated to Ohio, where he may have continued his business and even engaged in politics under the Democratic Party. His apprentices may have included John Hugh Williams of Iowa (his son in law) and Genin Sylvester of Ohio. Learn More...