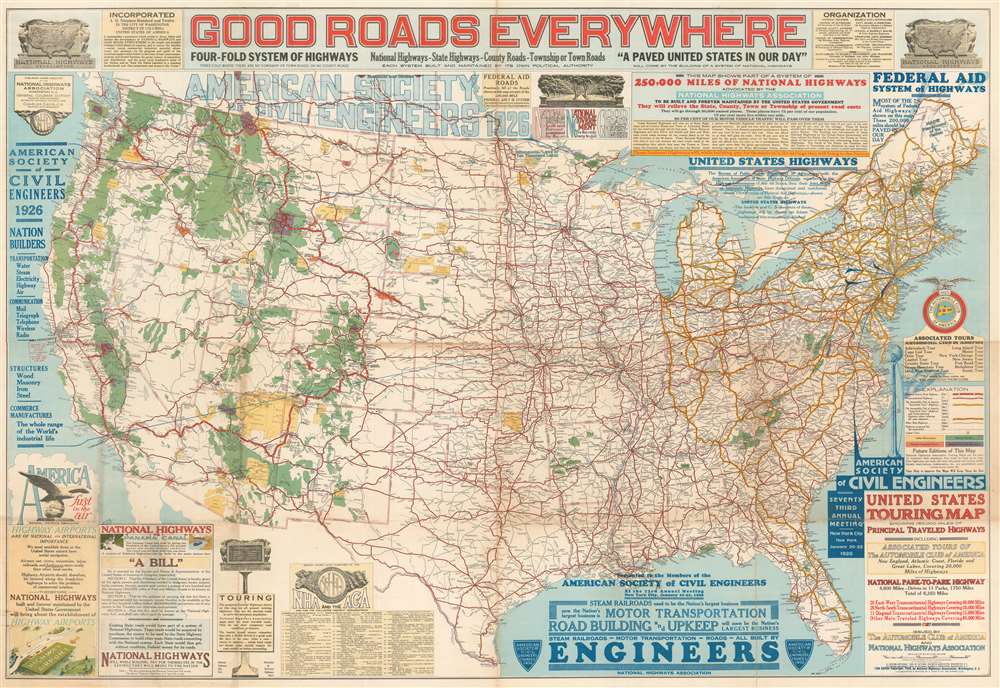 Rare persuasive map made to promote the constrution of the U.S. Highway System!

A scarce, large, and strikingly dense 1926 persuasive map of the United States prepared to promote federal investment in a national highway system. The map covers the United States from Coast to Coast and from Canada to Mexico. Highways are illustrated with color coding defining the 250,000 miles of national highways advocated for by the National Highway Association. These include the NHA's darling project, the National Park-to-Park Highway connecting the National Parks in the western United States. The map also includes arguments for the construction of 'Highway Airports.'

When Horatio Nelson Jackson became the first person to drive a car from San Francisco to New York, in 1903, he had to navigate a complex network of dirt roads, cow paths, and railroad paths. The achievement was well documented in the press and served to underscore the need for a nationalized road system. In the subsequent decades various 'auto-trail' organizations began constructing highways between towns willing to pay for the construction and maintenance. The most famous of these was the Lincoln Highway, dedicated in 1913. After considerably lobbying by organizations like the NHA and Automobile Club of America, Congress passed the Federal Aid Road Act of 1916, which provided monetary support to the construction and maintenance of many of these early roads. Lobbying continued and in November of 1926, with the support of the American Society of Civil Engineers, a 'final' U.S. highway plan was approved and construction got underway in earnest.

The National Park to Park Highway was an American auto trail in the in the 1910s and 1920s, plotted by A. L. Westgard. Before the development of this system, it was nearly impossible to get to many of the national parks, and between them save by train. The development of the automobile change this. The vision for the Park-to-Park highway followed a huge loop throughout the western United States, connecting twelve National Parks, among them Yellowstone, Rocky Mountain, Glacier, Crater Lake, Yosemite, Sequoia, Grand Canyon, and Zion, among others. While part of the route involved improving and connecting existing highways, other parts involved the construction of new roads. The project was mostly constructed form 1915 - 1920, by which time eleven states were involved in the Park-to-Park Highway program.

This map was prepared by John C. Mulford and C. C. Faunce. The first edition appeared in 1924, followed up numerous updated and revised editions. The present example, issued in 1926, is the 13th edition, issued for the 73rd annual meeting of the American Society of Civil Engineers, held in New York City in January of 1926. All editions were issued jointly by the Automobile Club of America and the National Highways Association.

John Cheeseman Mulford (April 27, 1876 - March 15, 1933) was an American cartographer active in the early to middle 20th century. He was born in Winnetka, Illinois. As early as 1918, Mulford worked in the drafting section of the Washington D.C. office of the Bureau of Reclamation, a federal water resource management agency. Mulford was later the chief cartographer of the National Highways Association (NHA). He played a significant role in mapping the early development of the American highway system. Mulford died in Maryland in 1933. Learn More...


The American Automobile Association (March 4, 1902 - present), better known as AAA ('Triple-A'), is a federations of motor clubs throughout America. A privately held national member association, AAA boasts over 58 million member in the United States and Canada. Founded on March 4, 1902 in Chicago, Illinois, AAA was originally created in response to a lack of roads and highways that were suitable for cars by nine individual motor clubs, including the Chicago Automobile Club, Automobile Club of America, and Automobile Club of New Jersey. AAA began publishing road maps in 1905 and hotel guides in 1917. Learn More...

Good. Map backed on archival tissue for stability. Some repairs and wear along original fold lines and at fold intersections.