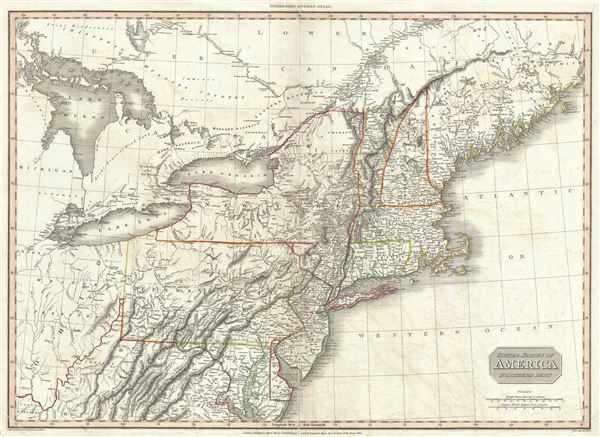 One of the few maps to illustrate the Connecticut Western Reserve in modern day Ohio. Sovereignty over the District of Maine remains unresolved.

A rare and important 1810 map of the northeastern part of the United States by John Pinkerton. The map covers from Lake Huron and Ohio, extending north as far as Canada and Maine, and south to the Chesapeake Bay and northern Kentucky. The states of New York, Pennsylvania, Maryland, Delaware, New Jersey, Connecticut, Massachusetts, New Hampshire, Rhode Island, and Vermont are illustrated in full. Ohio and Michigan are collectively identified as the Western Territory and are partially included. The Great Lakes Ontario, Erie, and Huron and represented fully.

Maine, identified here as the 'District of Maine,' is given the ambiguous borders associated with the 1783 Treaty of Paris as the end of the American Revolutionary War. As might be expected, Pinkerton's postcolonial sympathies lay heavily with British interests and Maine is here presented as more attached to Canada than the United States. From an American perspective, Maine was considered to be an extension of Massachusetts. In fact, the entire district was sparsely inhabited except along the coast, which was generally lawless and a haven for illegal smuggling and trade between the British Provinces in Canada and the United States. Just two years after this map was made the War of 1812 broke out. The War of 1812 arose over various unresolved issues associated with the American Revolutionary War, including some associated with the Maine border. During the war the British were exceptionally aggressive in this region and seized most of the Maine coastline. It was not returned to the United States until the 1815 Treaty of Ghent.

This map was created during the transitional period of expansion shortly following the American Revolutionary War. As such this is one of the few maps to specifically depict the Connecticut Western Reserve in what is today northeastern Ohio. The Connecticut Reserve is a remnant of Connecticut's original colonial era coast to coast charter. Following the Yankee-Pennamite Wars, Connecticut was forced to surrender the Pennsylvania portions of the charter; however, it retained some lands to the west of Pennsylvnaia and north of the 41st parallel. Connecticut later surrendered these claims in exchange for federal assumptions of its Revolutionary War debt.

Drawn by L. Herbert and engraved by Samuel Neele under the direction of John Pinkerton. Published in London by 'Cadell and Davies' and 'Longman Hurst Ress & Ormes' for John Pinkerton's

Pinkerton, John, A modern atlas, from the latest and best authorities, exhibiting the various divisions of the world, with its chief empires, kingdoms and states, in sixty maps, carefully reduced from the largest and most authentic sources, (London: Cadell & Davies, Longman Hurst Rees, & Orme) 1811.

Very good. Original centerfold exhibits some wear and verso reinforcement. Offsetting throughout. Blank on verso.
Looking for a high-resolution scan of this?