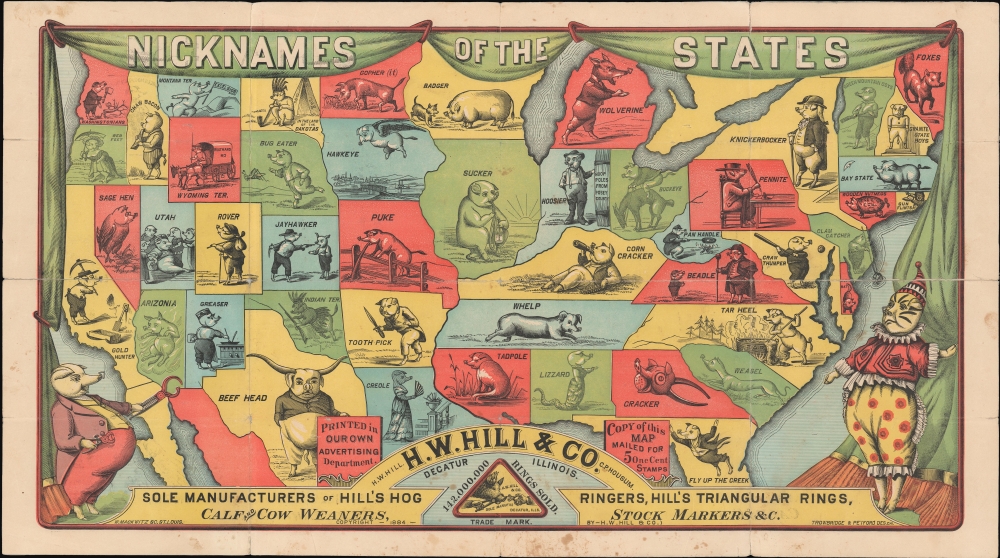 A most ‘pignominious’ map, this is a scarce 1884 chromolithograph epitomizing the small but adored genre of pig-themed maps. This charming thematic map of the United States was issued on behalf of H.W. Hill and Company to promote their signature product - 'hog ringers', a sturdy porcine nose piercing meant to prevent instinctual rooting behavior. Although some geographical liberties have been taken, the map features humorous anthropomorphized pigs for each state representative of that state's nickname. For example, North Carolina, known as the 'Tar Heel State' features a pig stirring a vat of tar. In California, the 'gold state', a pig works a mine with pick and shovel. Some nicknames remain in use today, like Knickerbocker for New York, while others are less than complimentary and have long fallen out of fashion. Missouri, for example, is here identified as the 'Puke State' with the representational pig vigorously vomiting. All the pigs depicted wear the distinctive H. W. Hill Hog Ringer.

This map was designed by Chicago artists William Eugene Sutphin Trowbridge and Charles Edgar Petford, working as 'Trowbridge and Petford' and printed in St. Louis by William Mackwitz. Rare. We note examples at the Library of Congress, in the P. J. Mode Collection of Persuasive Cartography at Cornell, the University of Minnesota-Minneapolis, and the Newberry Library in Chicago.

William Eugene Sutphin Trowbridge (October 13, 1832 - c. 1920) was a Chicago-based artist and illustrator active in the second half of the 19th century. Trowbridge was born in Danbury, Connecticut but was active in Rockville, Illinois, then Chicago from 1872. He appears through this period in various Chicago directories as an artist, sign painter, real estate agent, clerk, and secretary. In the 1880s he was a partner with Charles E. Petford (1854 - 1920) in the graphic design firm 'Trowbridge and Petford'. Learn More...


Charles Edgar Petford (1854 - February 9, 1920), a.k.a. C. Edward Petford, was a Chicago-based artist, architect, and graphic designer active in the second half of the 19th century. Petford was born in London and lived his early years in Birmingham, England. He worked in England as a theater set and costume designer. Afterwards, he traveled extensively to India, South America, and England before emigrating to the United States and settling in Chicago in 1881. There he was a staff artist for the Chicago Tribune. In the 1880s he was a partner with William E. S. Trowbridge (1832 - 1920) in the graphic design firm 'Trowbridge and Petford'. Petford was arrested for polygamy in Malden, Massachusetts in 1907, where he apparently kept a second wife, in addition to his Chicago wife. Around 1915, in retirement, he moved to Norwich, Connecticut. There, he worked as a designer for the Davis Theater before he died of pneumonia. Learn More...


William Mackwitz (February 21, 1831 - August 6, 1919) was a German-American engraver and lithographer active in St. Louis in the second half of the 19th century. Mackwitz was born in Braunschweig, Germany and emigrated to the United States in 1856 - settling in St. Louis. He worked as an engraver in St. Louis for roughly 60 years. A collection of Mackwitz notebooks and sketchbooks survive at the Missouri History Museum. Learn More...