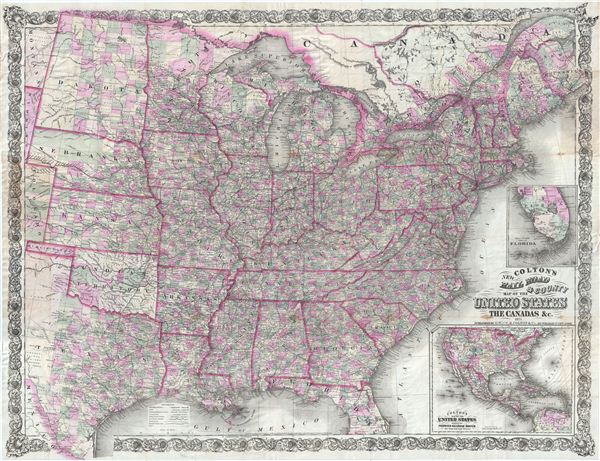 An uncommon pocket map of the United States issued in 1875 by J. H Colton. This large map covers the most inhabited parts of the United States from Texas, Kansas, Nebraska and Dakota eastward to the Atlantic. Colton offers a wealth of cartographic detail including counties defined by color coding with elevation rendered by hachure. The map includes railroad lines, towns, cities, and notations regarding various American Indian nations. Colton's choice to terminate the map on the eastern slopes of the Rocky Mountains (106th meridian) is suggestive of the fact that this is, in essence, a railroad map and the transcontinental railroad had yet to be completed. An inset map in the lower right quadrant details the entire United States and offers more information regarding proposed railway lines extending to the Pacific. A further inset above the title details south Florida, identifying the then young city of Miami, though no railroad had yet extended into the region. The whole is surrounded by a wide decorative vine motif border.

Colton first issued this map in 1860. Numerous reissues and updates followed including a dissected linen-backed British edition. The present example, 1875, is the latest example we have come across and among the scarcest of the series. Published by G. W. and C. B. Colton from their office at 172 William Street, New York City.