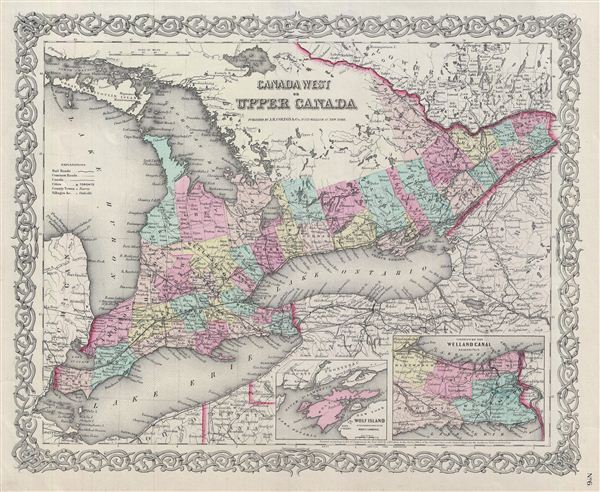 An excellent 1855 first edition example of Colton's map of Ontario or Upper Canada. Like most of Colton's regional maps, this map was derived from an earlier wall map of North America produced by Colton and D. Griffing Johnson. Centered on Lake Ontario, the map covers what at the time was called Upper or West Canada from Michigan to Montreal. Two insets in the lower right quadrant detail Wolf Island and the Welland Canal. Lake erie and Lake Ontario and included in full at center, Lake Huron is partially shown. Colton's decision to extend the map southward, thereby fully including Lake erie, most likely stems from the influence of the Treaty of Reciprocity, in effect from 1854 to 1866. The Treaty was a move towards free trade, in which the United States and Canada opened borders and shared navigation rights in the Great Lakes. The agreement ushered a period of prosperity and development through the region. This map also identifies various forts, rivers, mountain passes, fords, and an assortment of additional topographical details. Map is hand colored in pink, green, yellow and blue pastels to define state and territorial boundaries. Surrounded by Colton's typical spiral motif border. Dated and copyrighted to J. H. Colton, 1855. Published from Colton's 172 William Street Office in New York City. Issued as page no. 6 in volume 1 of Colton's 1856 Atlas of the World.