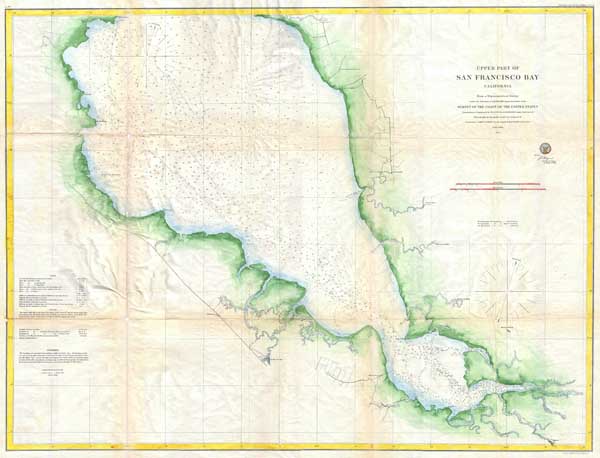 This is an attractive 1863 U.S. Coast Survey chart or nautical map or the southern part of San Francisco Bay, California. Covers from Alviso and Redwood city northward as far as Point Avisadera. Includes Union City, Johnson's Landing. Eden Landing. Mayhew's Landing, Ravenswood, San Francisquito Creek, Belmont, San Mateo and San Bruno. Offers thousands of depth soundings but true to form as nautical chart very little inland detail. Sailing instructions and tidal notation in the lower left hand quadrant. The triangulation and Topography survey for this map was accomplished by R. D. Cutts and A. E. Rodgers. The Hydrography was accomplished by parties under the command of James Alden and R. M Cuyler. The entire word was prepared under the supervision of A.D. Bache, director of the U.S. Coast Survey. Engraved by G. Mathiot for the 1862 edition of the Surveyor General's Report …

Report of the Superintendant of the U.S. Coast Survey, (1862 edition).

Good condition. Some minor toning and restoration work along original fold lines. Blank on verso.
Looking for a high-resolution scan of this?