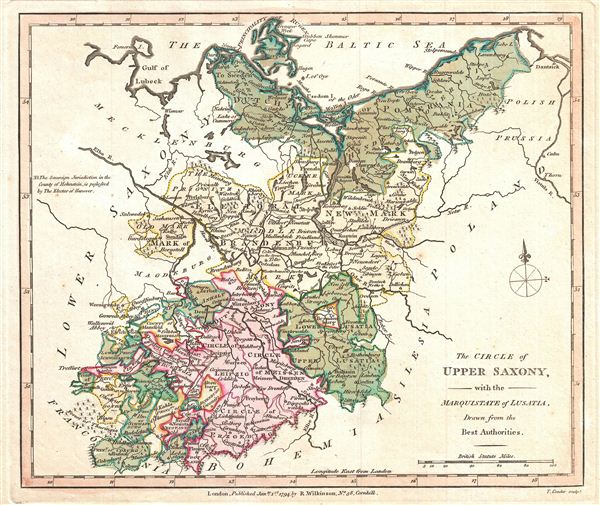 A finely detailed first edition 1794 map of Upper Saxony, in what is now Mitteldeutschland, by Robert Wilkinson. In 1180 Duke Henry the Lion fell, and the medieval Duchy of Saxony dissolved. The Saxe-Wittenberg lands were passed among dynasties who took the tribal name Sachsen (Saxons) upstream as they conquered the lands of the Polabian Slavs further up the elbe. The Polabian Slavs had migrated to this area of Germany in the second half of the first millennium A.D., and had been largely assimilated by the Holy Roman empire by the time this map was made. Today, the German government recognizes some 60,000 'Sorbs,' or descendants of the Polabian Slavs, who have retained their language and culture. The map covers from the Baltic Sea in the north to Bohemia to the south, and from Lower Saxony in the west to Silesia, Poland to the east.