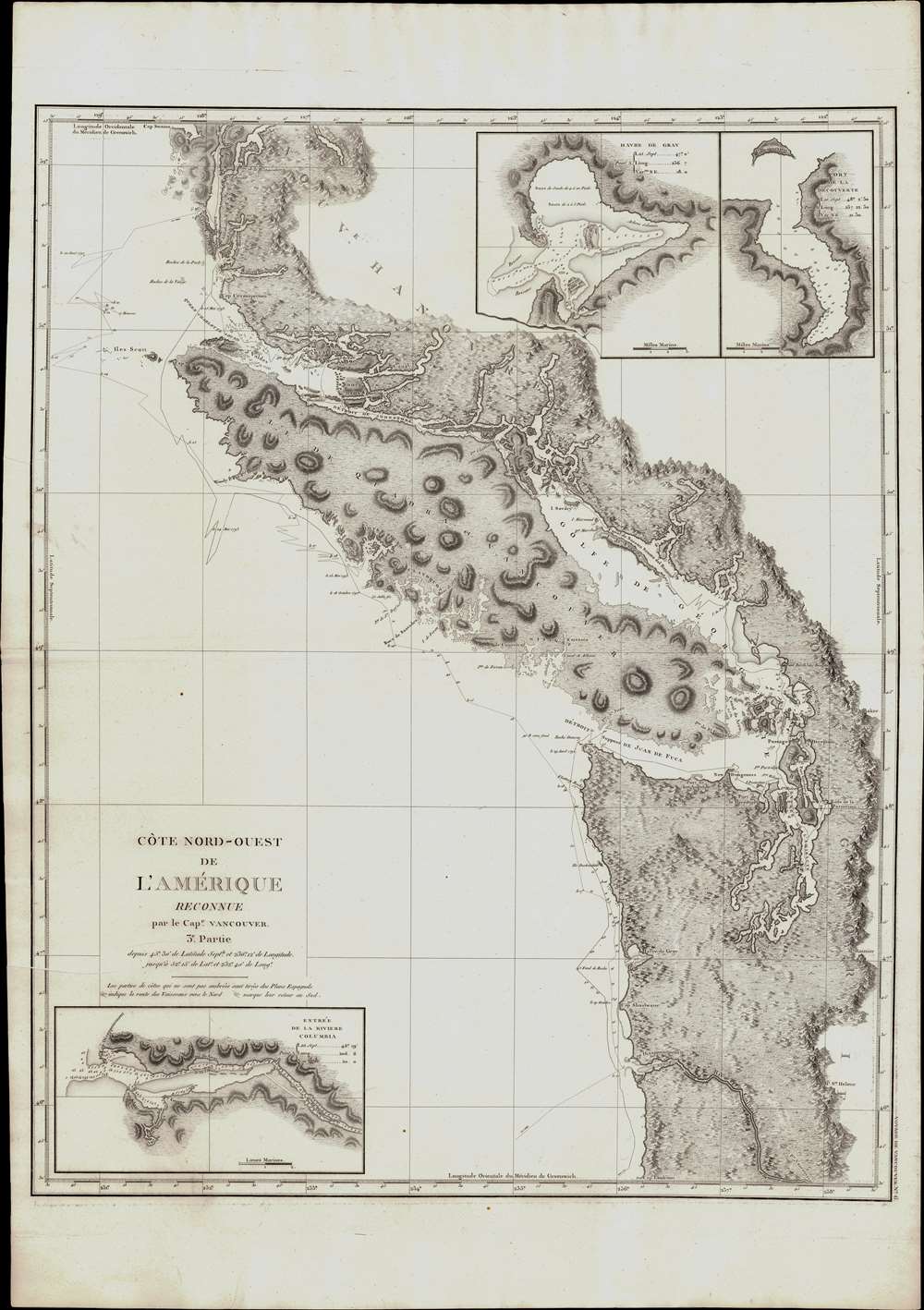 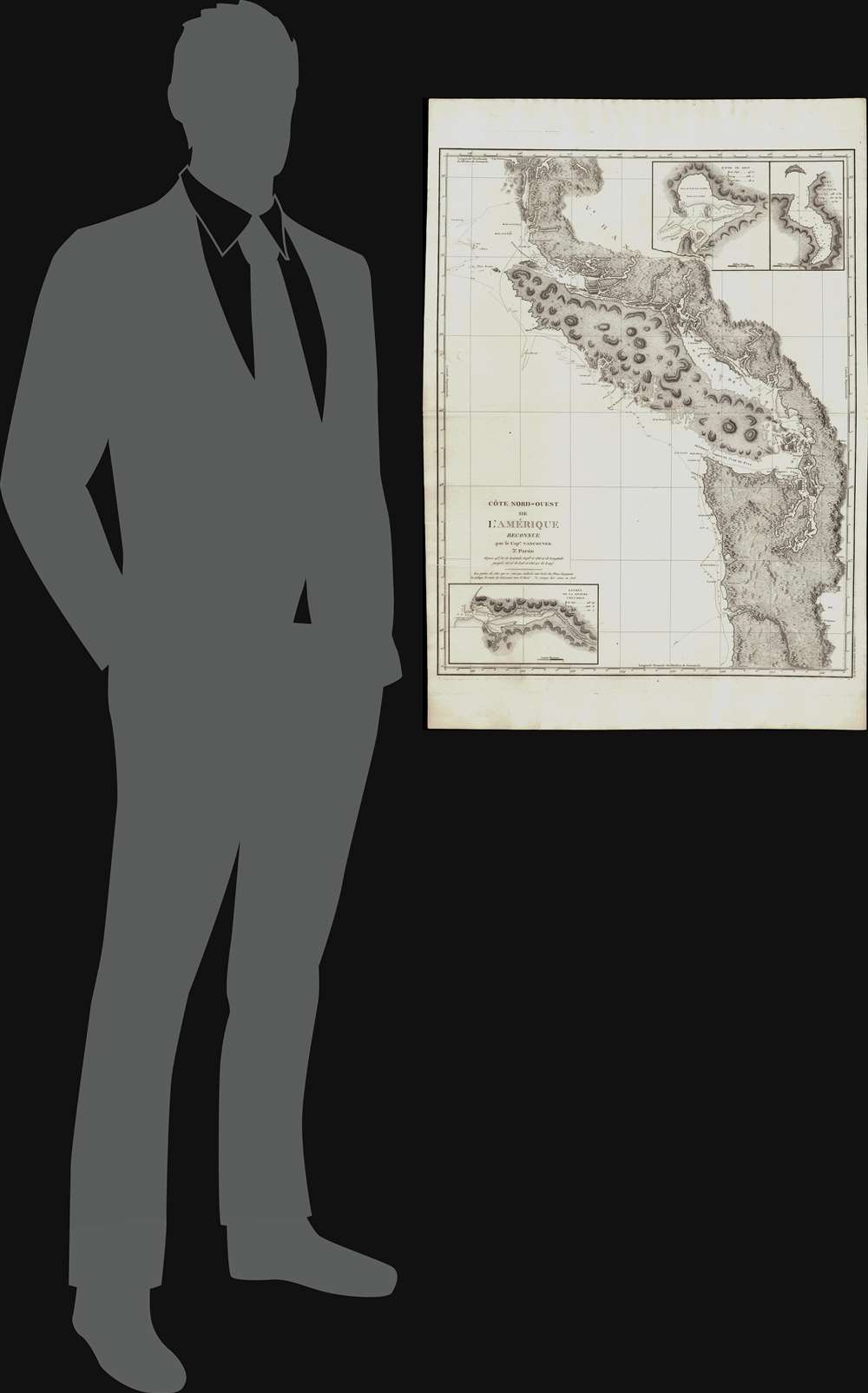 This beautifully engraved chart features a number of notable firsts, including the first charting of the Puget Sound, the first depiction of Vancouver as an island, and the first charting of the Johnston Strait. The chart also includes crucial coastal details, with Mount Rainier, Mt. St. Helene (Mt. St. Helens), and Mount Baker all shown. Insets in the upper right detail Cape Gray (Havre de Gray) and Port Discovery (Port de la Decouverte). Another inset in the lower-left focuses on the mouth of the Columbia River, soon to become a major artery for the fur trade.

The Vancouver Expedition was an epic four-and-a-half-year circumnavigation of the globe combining exploration and diplomacy. The expedition, launched under the auspices of the British Royal Navy, was commanded by Captain George Vancouver (1757 - 1798). It is considered the last great voyage of discovery of the 18th century and the last major voyage to search for a Northwest Passage. En route, Vancouver meticulously charted North America's northwestern Pacific Coast regions, including parts of Alaska, Washington, Oregon, and British Columbia. He also explored the Hawaiian Islands and the southwest coast of Australia. The goals of the expedition were both scientific and political. Vancouver was charged to precisely triangulate the locations of New Zealand and Australia, map the fur-rich Pacific Northwest for potential British settlement, and address unanswered questions from the final Cook Expedition (1776 - 1780) regarding Cook's Inlet and the possibility of a Northwest Passage.

In 1795, Vancouver returned to a Europe enmeshed in the French Revolutionary Wars (1792 - 1802). With the looming threat of Napoleon, Britain had little interest in science and discovery. Thus, despite his achievements, the great explorer was sidelined and besieged by personal and political enemies made during the voyage, including the expedition's naturalist Archibald Menzies (1754 - 1842) and the wastrel sailor Baron Thomas Pitt (1775 - 1804), who attempted to beat Vancouver down on the streets of London. By this time, the navigator's heath had also deteriorated and he died in 1798 - of unknown causes.

The 1799 French edition of Vancouver's Voyage de découvertes was engraved by Tardieu and published by the French De l'Imprimerie de la République hot on the heels of the 1798 English edition of the work, from which it was derived and translated. The rare and coveted French edition of Vancouver's Atlas was more beautifully produced with better engraving, higher quality paper, and more detail than the 1798 English edition. Not only was its quality superior to the English edition, but it was also unsurpassed by the later 1828 folio edition. We see some forty examples of the 1799 in institutional collections but note that the separate chart is cataloged only two times in OCLC, one of which is in the Clements Library and four duplicate entries for the Biblioteca Nacional de Espana. This scarce map is a core piece for any serious collection focusing on Vancouver, British Columbia, or the Pacific Northwest.