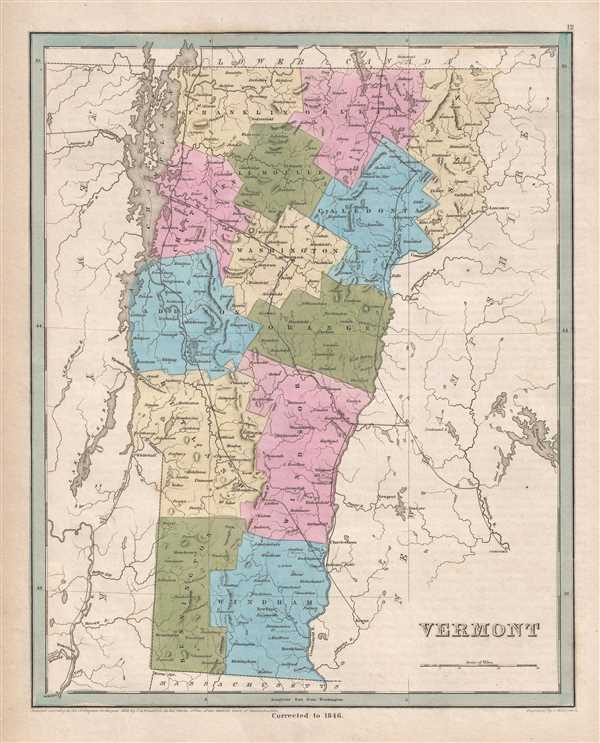 This is an 1846 Thomas G. Bradford map of Vermont. The map depicts the region from New York to New Hampshire and from Quebec to Massachusetts. As is prevalent among many maps from Bradford's A Universal Illustrated Atlas, the recently constructed rail network throughout New Hampshire and the surrounding states is highlighted.

During the 1830s and 1840s, there was a significant push to build railroads from Boston across New Hampshire and Vermont to Lake Champlain, because New York State was no longer issuing charters to out-of-state railroad companies that might compete with the Erie Canal. Thus, by building railways through New Hampshire and Vermont, New York could be mostly avoided. It took a threat from companies in Massachusetts and Vermont to completely bypass New Hampshire for political forces in New Hampshire to back down from the anti-rail positions. However, events did not follow the same path in Vermont. The Vermont Railroad Commission was formed in February 1830 to help support the creation and financing of railroad companies in the state. Once political forces in New Hampshire fell into line, two different routes through to Burlington were proposed, both of which are illustrated here: the 'Central Route' and the 'Rutland Route'. Two different proposals for the 'Central Route' are illustrated here: one traveled via Concord and Montpelier to Burlington, and the other via Bellows Falls, Charlestown, and Montpelier to Burlington. The 'Rutland Route' cut across Vermont via Bellows Falls and Rutland to Burlington.

Highly detailed, each county is illustrated, labeled, and shaded a different color to allow for easy differentiation. Numerous cities and towns are labeled, including Montpelier, Rutland, and Burlington. Lake Champlain, depicted in detail, acts as the northern half of Vermont's border with New York. Myriad rivers and lakes are illustrated throughout the state, along with Lake George, the Champlain Canal, and the Hudson River in New York.