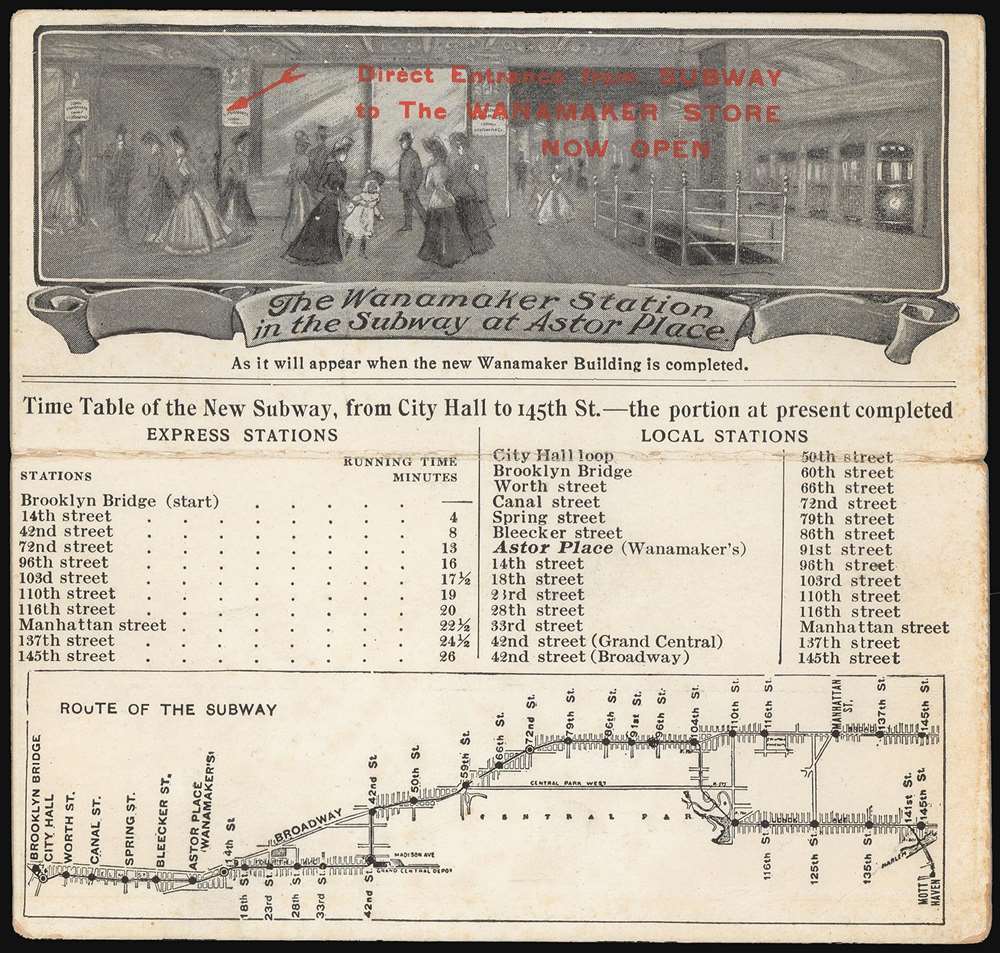 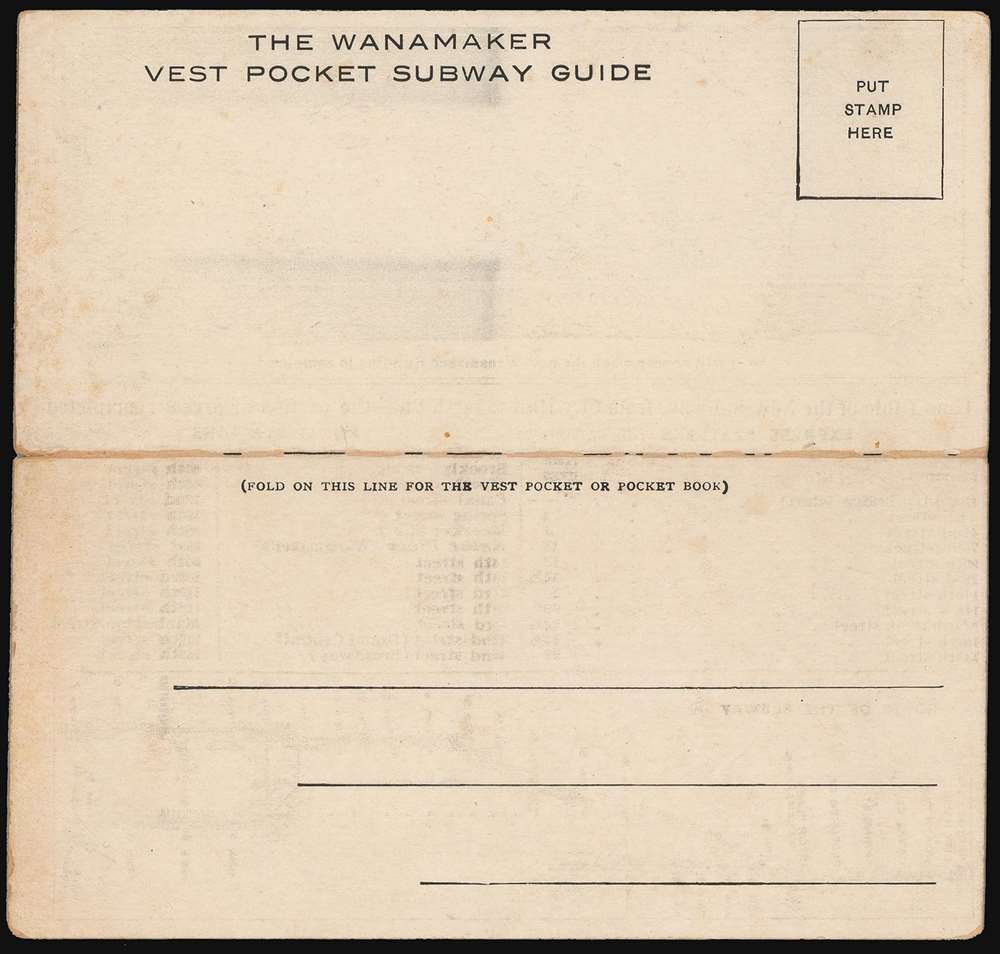 Only the fourth known example of the very first subway map for use by the public.
$11,000.00

This 1904-07 Wanamaker Vest Pocket Subway Guide is one of only four known surviving examples of the first subway map intended for public use. It was printed in 1904 on behalf of, or by, Wanamaker's department stores to promote their expanded New York City location, which featured an underground entrance to the Astor Place subway station. That busy subway platform is pictured here in an image entitled 'The Wanamaker Station in the Subway at Astor Place,' showing fashionably-dressed New Yorkers at the entrance to the Wanamaker's store (pointed out to the reader with the red, hand-stamped note, 'Direct Entrance from Subway to the Wanamaker Store Now Open.')  A train, with its taillight shining, can be seen leaving on the uptown track. Below this vignette are a timetable and a map of the nascent subway (then extending from Brooklyn Bridge to 145th Street.) Special attention, naturally, is given on both the map and timetable to the Astor Place stop with its underground Wanamaker's storefront. Although Wanamaker's is long defunct, the same entrance is today used by the sole K-Mart in Manhattan.

Prior to the advent of smartphone-based subway apps, the folding subway map was so essential for the New Yorker and tourist alike that it is surprising that the subway system itself did not produce maps for the public until 1915. Until then, it fell to the commercial sphere - hotels, insurance agencies, and retailers - to produce maps that would simultaneously promote business while encouraging subway use. Wanamaker's production of the first of these maps is consistent with their history of advertising innovation. They were the first retailer to regularly take out half- and full-page advertisements in newspapers, and the first to employ a full-time copywriter to compose them. Wanamaker's deliberately built their New York flagship store with a connection to the subway, so their production of this, New York's 'first subway map to be distributed' (Augustyn and Cohen, Manhattan in Maps, p. 147) was a natural. It was printed and first distributed in 1904, the year the subway opened but in advance of the opening of the Astor Place store. (The sole, confirmed, 1904 example of the Subway Guide bore a 1904 postal cancellation.) It appears that Wanamaker's sent their guide first to customers on an existing mailing list; the Wanamaker's ads printed in the New York Times and the Tribune of April 11, 1905 announced,

Vest-Pocket Subway Guide Cards giving diagram of the Subway, list of stations, and running time of Express trains, will be mailed free, upon request. Mighty handy to have in the shopping-bag, or pocket, for reference.

Doubtless more were handed out to customers visiting the Wanamaker's at the old A.T. Stewart building. Upon or around the opening of the Astor Place location in 1907, the red-stamped notation pointing out the platform entrance in the vignette was added; three of the four surviving examples of the card that have come to light feature this stamp; none of these were addressed or bore postage, suggesting that they were included in envelopes or other mailed circulars or handed out at the store. We see no indications that the card and map were ever otherwise updated, or that later editions were produced. It seems there was a single print-run, with the remaining stock stamp-updated circa 1907. Even by 1906, the IRT had expanded far beyond the Brooklyn Bridge/145th St. limits of this guide, and so it quickly became obsolete. Indeed, the inclusion of a timetable on a New York Subway map would not become conventional at all, it being something of a grudging point of pride that any attempt to schedule the New York City subway would be the futile act of a naïf, or perhaps an out-of-towner.

It should be noted that the IRT did produce subway maps for internal planning, administrative, and governmental use prior to 1904, but these were not intended for the use of travelers or public dissemination.

Stops on the IRT

From 42nd street south, the line followed the route now served by the 6 train along Park Avenue and Lexington. The route has necessarily changed over the course of more than a century: The original grandiose Brooklyn Bridge terminus, the 'City Hall Loop' has closed and remains one of the city's least accessible historical sites. The Worth Street station has been closed since 1962. 18th Street station closed in 1948. Upon reaching 42nd street, the train cut westwards to Broadway and 42nd; from there it ran along what is now the IRT Broadway–Seventh Avenue Line (served by the 1, 2, and 3, trains). The stops are familiar up until the 91st street station (closed in 1952). The 103rd stop appears to be mislabeled 104th, perhaps to conform to the elevated station there. 125th street station is shown using the older name of Manhattan Street.

This card was printed by Wanamaker's - either in-house, or by one of a number of commercial printers the firm used for advertising publishing - in 1904. There was only a single print run: when Wanamaker's New York City location opened in 1907, a note indicating the underground entrance to the store was added by means of an inked stamp to the original printed stock, rather than meriting a fresh print run. We are aware of only three examples of this object to appear on the market with the c. 1907 red stamped note present; only a single example without the stamp (and postmarked 1904) has come to light. Until its reference in Augustyn and Cohen's 1997 work, this piece had evaded the attention of all literature relating to the mapping of New York. There are no institutional copies of either state catalogued in OCLC. The Durst Collection of Columbia University contains what appears to be a proof of the vignette image, on card stock but lacking the map or timetables.

John Wanamaker (July 11, 1838 - December 12, 1922) was an American merchant and public figure, and a pioneer in advertising and marketing. Born in Philadelphia, Pennsylvania, he would found the famous department stores that carried his name. Later in life he served as U.S. Postmaster General during the term of President Benjamin Harrison, (1889 - 1893.) He opened his first, Philadelphia store - Oak Hall - in 1861; his second store opened in 1869, and this one would be named John Wanamaker and Co.; in 1875, he moved the growing business into an abandoned railroad depot and converted it into what is considered the first department store in Philadelphia. The 12-story Grand Depot, with its Grand Court, pipe organ, iconic Eagle statue, and holiday light shows became an institution. In 1896 Wanamaker expanded into New York City, taking over space that had been established by A. T Stewart. He expanded again into an adjacent, newly-built 14-story edifice which Wanamaker cannily had built with its 32 acres of retail space directly accessible via the new Astor Place subway station. A proponent of the power of advertising, he was the first retailer to place half and later full-page newspaper advertisements, eventually hiring the world's first full-time copywriter to fuel his circulars. The arrival of Wanamaker's stores in New York was spearheaded with a vigorous newspaper campaign, including the clever innovation of producing the first subway map intended for use by its ridership. Learn More...