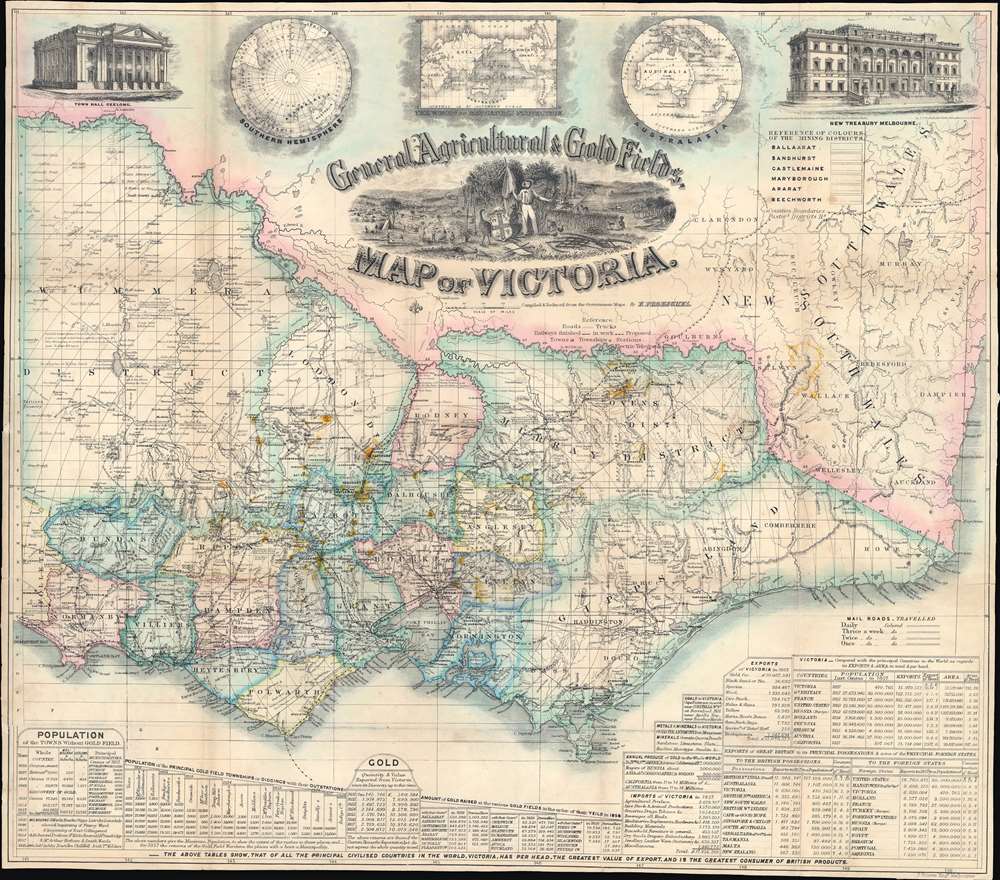 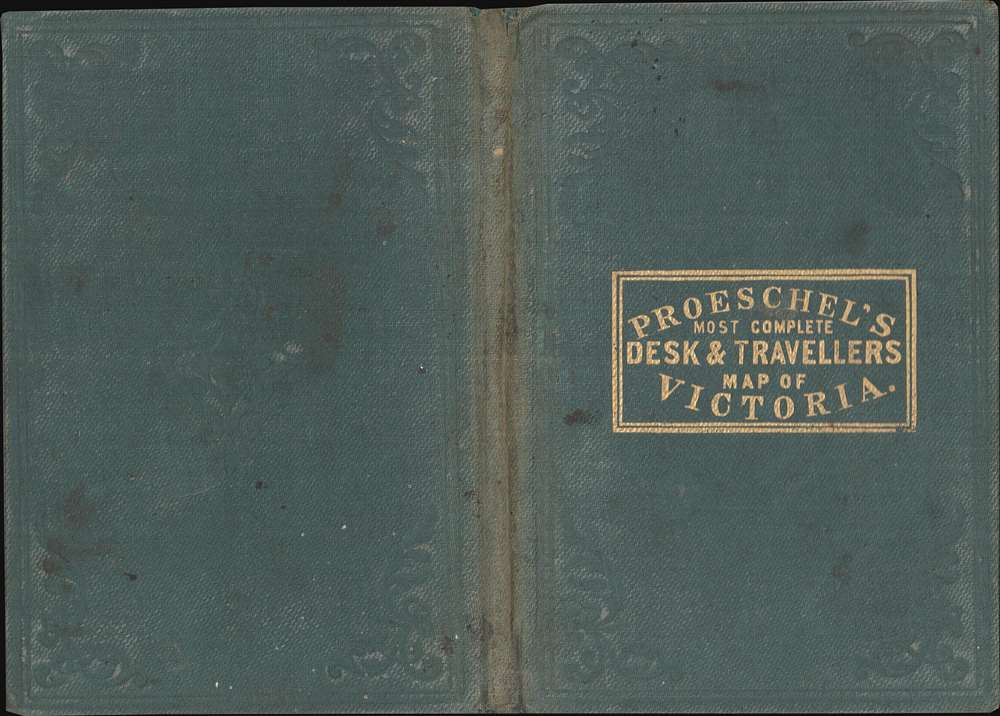 This is a rare 1859 Frederick Proeschel pocket map of Victoria, Australia, published to capitalize on Victoria Gold Rush emigration. Such maps were sold cheaply to hopeful prospectors who often carried them in-hand to mining and agricultural camps - the harsh conditions contributing to such maps having exceptionally low survival rate. The central cartouche engraved by D. Tulloch, illustrates Victoria's many blessings, including rich flora and fauna, excellent agricultural lands, and of course, the all-important gold mines. Herein, gold 'diggings' are highlighted throughout in brilliant yellow - offering essential data to the emigrant. In addition, the map names settlements, offers commentary on terrain, and highlights both planned and active transportation networks. For those disinclined to rough gold camp life, It also notes 'good sheep pastures'. A view of the Geelong town hall occupies the upper left, and a view of the Melbourne 'Gold Office' the upper right. Three inset maps illustrate, from left to right, the southern hemisphere, the world on a Mercator projection (with Australia at the center) and Australasia. Statistics are included along the bottom border, with particular attention to 'principal gold field townships or diggings', the values of gold extracted from specific fields, Victoria's exports, and Great Britain's exports.

Gold was known in Australia prior to 1851, but knowledge of it was intentional suppressed by the colonial government, thus preventing all-out gold rushes. When gold was discovered at Sutter's Mill, California, in 1848, precipitating the California Gold Rush, countless Australians migrated in search of fortune. Hoping to retain their dwindling work force, Australian colonial governors sought Colonial Office approval to allow private development of mineral resources. Additionally, they offered substantial rewards for any discovery of payable gold. The first major Australian gold rush began in earnest when prospector Edward Hargraves discovered gold at Ophir, near Orange. A series of subsequent discoveries followed, transforming the Australian economy and leading to a rush of new immigration.

The Victoria Gold Rush lasted from 1851 until 1869. After the first major discoveries, fortune-seekers began pouring into Victoria. Rough and ready tent cities sprang near known 'diggings'. To better administer the population boom, the Colonial Office separated Port Phillip from New South Wales, creating the Colony of Victoria, with its capital in Melbourne. Melbourne had a population of around 29,000 in 1851, over 500,000 by 1861, and over 700,000 by 1869. Gold production in Victoria exceeded all other gold producing regions in the world, except for California, with its highest annual yield reaching 3,053,744 try ounces (1856). From 1851 to 1896, a staggering 61,034,682 troy ounces were extracted.

Frederick Proeschel (March 11, 1809 - May 1, 1870) was a map maker and publisher. Born in Colmar, Haut Rhin, France, Proeschel began his professional life as an upholsterer. While working as an upholsterer, Proeschel experimented with different materials and even designed mattresses using springs. He also invented a way of manufacturing moisture-resistant bricks, which garnered him recognition from several different organizations in France. During the Revolution of 1848, Proeschel suffered substantial losses to his business, and soon left for the United States. He stayed in the U.S. until 1852 when he left for Australia, arriving in Melbourne in December of that year. By the end of July 1853, Proeschel was operating an information and labor agency in Melbourne on Little Bourke Street that operated in English, French, and German (Proeschel was fluent in all three). He also published his first map in 1853 and it detailed routes to the gold diggings in Victoria. Then he published maps of Melbourne, Collingwood, Richmond, and North Melbourne. He published his first map of Victoria in 1856. Proeschel's early maps were lithographs of modest quality. Not long after Proeschel published his first map of the gold diggings in Victoria, James Buckingham Philp (the lithographer who printed Proeschel's first work) published a new copy of Proeschel's map of the gold diggings without Proeschel's knowledge. Philp changed the title and polished the map, but it was obvious that it was copy of Proeschel's map. Proeschel was understandably furious and wrote an incensed letter to the Colonial Secretary pleading his case. Unfortunately for Proeschel, copyright law did not exist in Australia at the time, so nothing could be done to protect Proeschel's intellectual property. Then, in 1859, he published a finely engraved map of Victoria with the most up-to-date information. Several editions of this piece were published. He published his Atlas of Australasia in 1863, which cost him over three thousand pounds, a cost he likely did not recoup. While successful as a map seller, he never managed made a fortune. Proeschel left Australia in February 1864 for London to promote his work on an atlas of world exploration from the 1460s until the 1860s. Apparently this venture was unsuccessful, and he soon returned to Paris, where he again tried to promote his atlas. He published pamphlets on cholera and investment in Paris in the late 1860s and died in Paris with a mere forty francs to his name. Learn More...


James Grieve (fl. c. 1859 - c. 1871) was an engraver active in Melbourne, Australia in the mid-19th century. Grieve engraved Frederick Proeschel's map of Victoria that was first published in 1859. He also published a map of Victoria under his own imprint in 1861 that measured 3 feet 10 inches by 2 feet 8 inches. Learn More...


David Tulloch (1829 - September 17, 1869) was a Scottish-Australian engraver active in Melbourne in the mid-19th century. Tulloch emigrated from Greenock, Scotland, to Melbourne, Australia in January of 1849. It was initially employed by Thomas Harn, publisher of Harn's Illustrated Australian Magazine. In 1851, Tulloch followed prospectors to the 'gold diggings', producing some of the first on-site illustrations of the Victoria Gold Rush. In November of 1851, Tulloch established his own printing and lithography firm in Melbourne. Two years later, in 1853, he brought the map and line engraver James Davie Brown into the business. The duo produced several views and maps, receiving awards at the Victoria Industrial Exhibitions, but nonetheless dissolved their arrangement in 1856. Afterwards Tulloch fell into hard times. During his period, he produced several on-demand engravings for various Australia firms, including De Gruchy and Leigh, Fergusson and Mitchell, and Whitehead and Co. In 1859, he engraved vignettes for Frederick Proeschel's important map of Victoria In 1860, he was briefly employed by the Victoria Geological Survey, creating lithographic hachures. He filed for bankruptcy in 1861, but nothing seems to have come from it. From 1864 to 1866 he appeared in Melbourne directories as an engraver based at 91 Cecil Street, Emerald Hill (South Melbourne). On September 17, 1869, Tulloch died of pulmonary tuberculosis. Learn More...