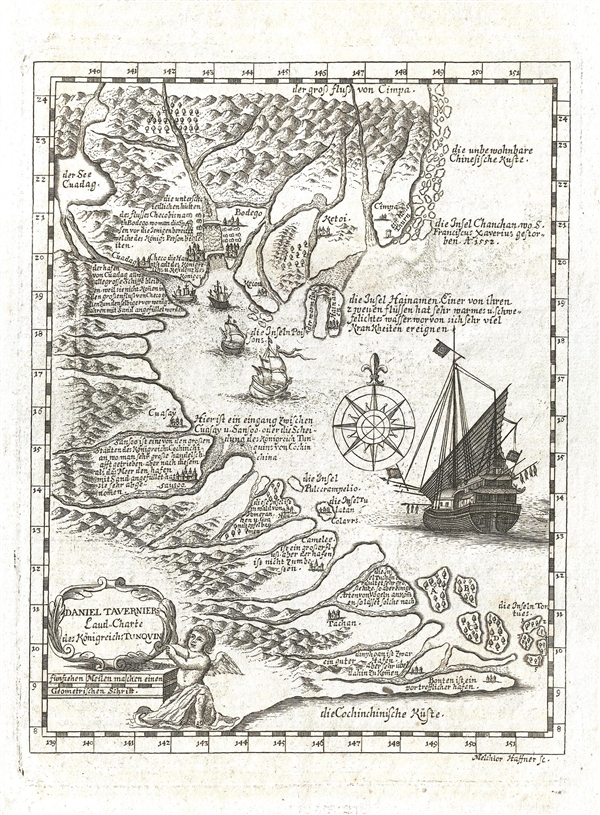 A rare, important, and highly desirable 1684 map of modern day Vietnam and the South China Sea by the French Huguenot merchant adventurer, Daniel Tavernier. The map covers the coast of Vietnam from southern China to the Mekong Delta. It includes parts of modern day China, including the Island of Hainan, and the Chinese coast roughly as far north as modern day Hong Kong and Macau. It includes the Island of Shangchuan (上川岛), just south of Hong Kong, where the Navarrese-Basque Roman Catholic missionary, St. Francis Xavier, died.

This map is attributed to Daniel Tavernier, the elusive elder brother of the legendary gem merchant, Jean-Baptiste Tavernier. Daniel preceded his brother to the orient by at least 10 years and, from his base in the Dutch East India port of Batavia, made 11 or 12 voyages to Tonquin or modern day North Vietnam. This map was drawn from his experiences. The map features numerous textual annotations that Suarez suggests contain 'both factual and faciful' information, but we most to be very accurate. Annotations describe the famous mineral hot springs of Hainan, the silting of rivers in Cuadag, Checho, and Sausoo, and the site of missionary Francis Xavier's death on the Chinse island of Shangchuan. They further make note of the border between the kingdoms of Tonquin (North Vietnam) and Chochine (South Vietnam) in the vicinity of modern day Hue.

Much has been made of this map in relation to modern day trade disputes in the South China Sea between China, Vietnam, and the Philippines. The contested Spratly or Paracel Islands are unfortunately not identified. In fact, although the scope of the map should theoretically cover these islands, the expanse of sea where they lie is instead filled with a compass rose and a decorative vignette of a stylized Asiatic sailing ship. Nonetheless, this map does in fact cover the South China Sea nearly in full and it is meaningful that this is presented as a 'Map of Tonquin.' Despite covering parts of China, there is no reference to Chinese sovereignty extending south of Hainan.

It does, on the other hand, identify the Côn Đảo Archipelago (Condore Islands) as the Tortues, referencing the abundance of turtles found there. Shortly after this map was printed. In 1697, the English East India Company closed their factory in Hanoi. In 1702, the English East India Company founded a settlement on Pulo Condore as an entrepôt for ships plying between India and China. The effort was shortly lived and they were expelled by the Vietnamese on March 2 of 1705. Tavernier's identification of the islands suggests he recognized their strategic value long before the English established their settlement there.


Jean-Baptiste Tavernier (1605 - 1689) was a French gem merchant, traveler, and adventurer active in India and East Asia in the middle part of the 17th century. Tavernier was born in Paris of a French or Flemish Huguenot family that had emigrated to Antwerp, to escape persecution, and which subsequently returned to Paris after the publication of the Edict of Nantes, which promised protection for French Protestants. Tavernier had a family connection to mapmaking as both his father Gabriel and his uncle Melchior were cartographers and engravers. Nonetheless, despite a natural talent for drawing and engraving, he had an insatiable wanderlust and instead traveled independently to India and Asia where he made his fortune in the gem trade. Tavernier made a total of six voyages to Persia, India, and Asia between 1630 and 1668. Tavernier is best known for the discovery/purchase of the 116-carat Tavernier Blue diamond that he subsequently sold to Louis XIV of France in 1668 for 120,000 livres, the equivalent of 172,000 ounces of pure gold, and a letter of ennoblement. (Five years later, Louis had his court jeweler Jean Pitau recut the stone into the 68 carat French Blue and had it set as a hatpin. The gem was reset by his great-grandson Louis XV in The Medal of The Order of the Golden Fleece, stolen in 1792, and was recut and re-emerged in London 30 years later as The Hope Diamond). A wealthy man from his adventures, Tavernier acquired the Barony of Aubonne, and settled into a life of leisure wherein, to occupy himself he published a narrative of his voyages, along with two maps, as Les Six Voyages de Jean-Baptiste Tavernier (1676). Tavernier died in Moscow in 1689, at the age of eighty-four. There is a persistent and most likely false legend that he died from being torn apart by wild dogs as a result of a curse on the Tavernier Blue (Hope Diamond). He one of three brothers of the French merchant adventurer Daniel Tavernier who also made numerous voyages to East Asia. Learn More...


Melchior Haffner II (1660- November 1, 1704) was a prominent German engraver active un Augsburg during the second half of the 17th century. Haffner was born in Ulm and apprenticed as an engraver under his father of the same name. He married in Ulm around 1683. Shortly after he relocated to Augsburg where is began his own successful engraving business. He appears to have worked mostly for book publishers producing portraits, frontispieces, and bookplates, as well as a few maps. Several important maps are included in his corpus including maps of China issued for Ferdinand Verbiest (1623-1688) and the maps and other engravings included in Jean-Baptiste Tavernier's Les Six Voyages. Haffner II is not to be confused with this father, Melchior Haffner I, of Ulm, who was also an engraver. Learn More...