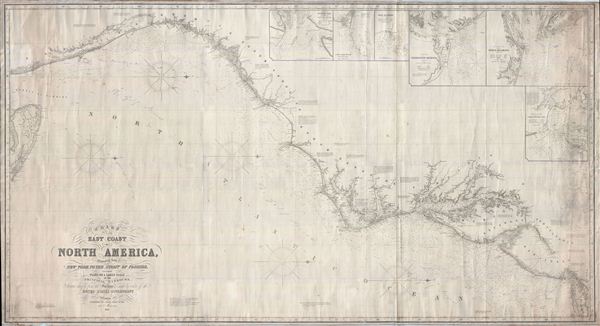 One of only three known examples of this important early chart covering Florida, Virginia, Georgia, New Jersey, and the Carolinas.

An extremely scarce, highly decorative, and monumentally proportioned 1855 sea chart or maritime map detailing the eastern coast of the United States from New York City to southern Florida (roughly around Palm Beach). The map was prepared by the British chart publisher James Imray and Son in their distinctive expansive style. In a broad spread, it includes the coasts of New York, New Jersey, Delaware, Maryland, Virginia, North Carolina, South Carolina, and Florida. The Chesapeake Bay, Delaware Bay, New York Harbor, the Bahama Banks, and the Outer Banks are rendered in beautiful detail. The chart is presented on a Mercator Projection with latitude measured from Greenwich, England. Like most nautical charts, the cartographer offers very little inland detail, but a wealth of maritime data. This includes the identification of various ports and harbors, coastal topography, shoals and other undersea dangers, and countless depth soundings in fathoms.

This chart further features six large insets in the upper right quadrant offering detailed charts of 'Tybee Bay and the Mouth of the Savannah River', 'Cape Fear River and Frying-Pan Shoals', 'Cape Hatteras', 'Charleston Harbor', the 'entrance of the River Delaware', and the 'entrance to Chesapeake Bay'. The cartography of the insets generally follows the preliminary work of the U. S. Coast Survey in their respective regions.

This, like most maps published by James Imray before his death in 1870, this chart is extremely scarce with only two known examples appearing in institutional collections and none in private hands. James Imray's Son, James Frederick Imray, did publish a similar far more common chart, covering roughly the same region but following the minimalist stylistic conventions of the British Admiralty, in 1883.

Very good, remarkably so. Minor soiling, right side. Minor verso repair, left side. Occasional manuscript annotation and additional soundings added in pencil. Is much cleaner than image above suggests due to difficulties in imaging such a large piece.
Looking for a high-resolution scan of this?