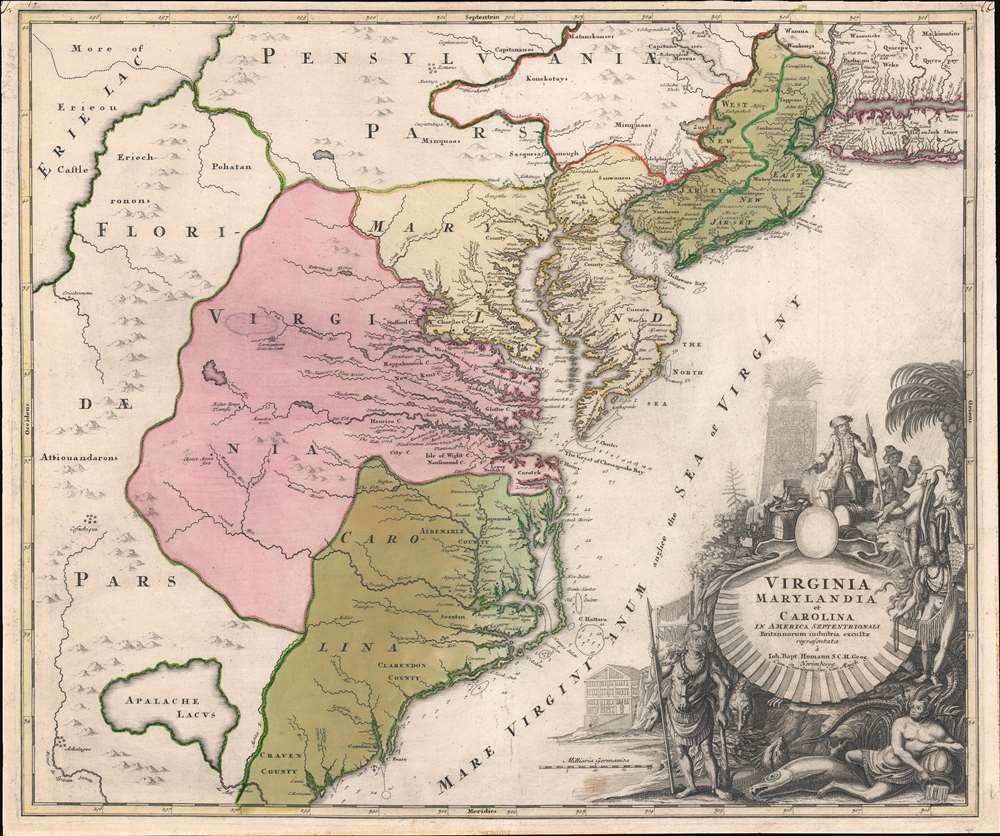 While serving as Virginia Lieutenant Governor and de facto governor, Spotswood (1676 - 1740) received numerous land grants in Virginia's interior - then a little-known mountainous region. The intent of the grants was to create a buffer zone against French incursion from to the west. Recognizing potential mineral wealth in the region, Spotswood conceived a plan to entice German miners and ironworkers - then widely recognized as the best in Europe - to settle there. This was not without precedent, as earlier maps and other evidence suggest there were already German settlers in the Shenandoah Valley, such as 'Miester Krugs Plantasie', likely emigres from the German settlements in Pennsylvania just to the north.

Spotswood began advertising in Germany for potential immigrants and contracted Johann Baptist Homann to make a map highlighting his vision. Here, three towns of potential interest to the German immigrant appear for the first time: 'Germantown Teutsche Statt' (Germanna) on the Rapidan River, a fork of the Rappahanock River; Fort Christanna (Christ Anna Fort) on the Makharing River; and 'Miester Krugs Plantasie' on the James River. Of Master Krug's Plantation, little or nothing is known, but it is believed to pre-date Spotswood's grants. The other two settlements, Germanna and Fort Christanna, are significant. Germanna is the site where most of Spotswood's miners would eventually settle, it is also where Spotswood established his ironworks, and later himself settled, constructing an enormous manor house.

Little has been said about the mapping of Lake Erie occupying the northwest quadrant. By 1715, the general outline and location of all five Great Lakes was known - but their proportions and latitudinal level was somewhat debated. The influential 1685 Jean Baptiste Louis Franquelin manuscript map places Lake Erie's southernmost shore roughly level with the northern part of the Chesapeake Bay - as shown here. Based upon the best cartography of the time, it was logical to assume one might travel northwest from Virginia only a short distance before reaching Erie. In 1716, Spotswood launched his Knights of the Golden Horseshoe Expedition, in which a band of some 50 prominent Virginians set forth from Germanna to explore that very potential. This was a gentlemanly expedition, lacking all of the horrors commonly associated with new discovery. They are said to have stopped frequently to drink from ample provisions of wine and spirits, not a single explorer was lost, and meetings with American Indian nations were peaceful. They crossed the Blue Ridge Mountains and entered the Shenandoah Valley, claiming it in the name of King George I. They did not reach Lake Erie, but believed that had discovered the route. On return, Spotswood gave expedition members commemorative tokens in the shape of a golden horseshoe.

Spotswood wrote that the expedition's goal was to discovery a route to Lake Erie, which he believed to be both close and accessible. On this map it is separated from Germanna by a narrow range of mountains (the Blue Ridge?), beyond which rivers flow directly into the Lake. This intervening territory he attaches to 'Florida'. The occupants of this region were mostly American Indian nations loosely allied to French Louisiana. Weather Homann is here using 'Spanish Florida' to undermine French claims, OR, referencing 'French Florida' claims dating to the 16th century, in unclear. Either way, discovering such a route would certainly make settlement more appealing, giving access to more markets and trade, as well as thwarting the growing French influence. Spotswood later sought sanction and funding from King George I to make a second expedition, establish a trade route, and build an outpost on Lake Eire; but permission was never granted.

Although Homann's remarkable representation of Spottswood's plan is extraordinarily up-to-date considering that Fort Christanna was founded around the same year this map was initially published, the remainder of the map embraces a number of common misconceptions and cartographic inaccuracies. Probably the most notable of these is his inclusion of Apalache Lacus. This fictional lake, the source of the May River, appeared on maps of this region since the 1591 Le Moyne-De Bry map and was popularized by the Mercator/Hondius map of 1606. The apocryphal lake remained on maps well into the mid-18th century before exploration and settlement disproved it.

Published by J.B. Homann both as a separate issue and in his Atlas Novus. There is unfortunately no definitive publication date for this map, although most date the first issue to about 1715. This would postdate the 1714 first wave of German immigrants under Spotswood's plan, but pre-date the second 1717 wave. None of the locations discovered by 1716 Knights of the Golden Horseshoe Expedition are named, suggested it pre-dated that expedition, thus 1715 is likely correct. The plates for the map wore out quickly, so most examples exhibit a weak impression. The strong impression here suggests an early strike off the plate. This map appeared in various Homann atlases from about 1715 to 1730.